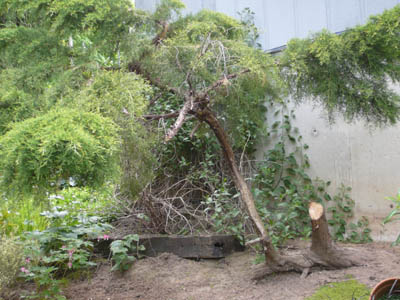 We expect gardening photos to scale the heights of beauty and grace, right? Well, not this one. This is an example of what can happen if you put off the inevitable. I know. It looks like an amputee from a Civil War field hospital. Richard and I seldom agree upon when, where and how much to cut back, so Mom Nature steps in. Last winter was a harsh one, with heavy, wet snow and ice. Several trees that had been overreaching cracked under the pressure. This cypress on the back of the house is the worst case in point. It had been slowly spreading, until it completely shielded the unattractive foundation, and yielded endless boughs to deck the halls during the holidays. We knew it was getting out of hand, but, like I said, the bickering never resolved itself into a plan of action. Now we are left with a barren expanse which I am trying my best to see as an opportunity rather than a disaster.

Yesterday, I apprehended R heading for the Acacia, loppers in hand (I gave him the loppers as a gift, so how much complaining can I do?). With the cypress incident fresh in our minds, we were able to negotiate each cut with admirable equanimity. The trimmed branches are dramatic in a vase. The tree, I think, will be spared the embarrassment of the fate of the cypress.