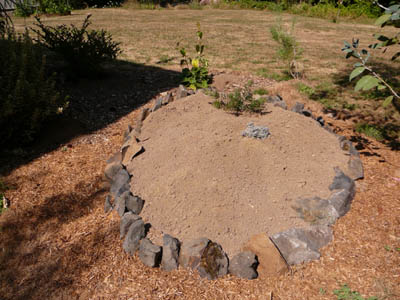 This berm is actually quite far along in the above shot. I’ll spare you the mounding of divots and debris leading up to the mulching with newspapers, etc., to get it ready for planting. The two lonely little plants failed to survive. Since then, I have learned to dig deep holes and supplement the soil with sand and gravel. Results are much better…guess one really does make his/her own luck. 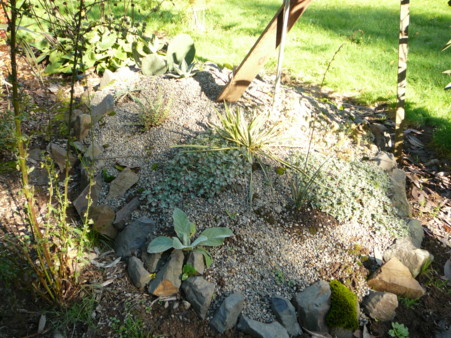 Here is how it looks today, planted with sedums, yucca, opuntia, hesperaloe, horn poppy, orostachys, sempervivum and agave, and mulched with gravel. That beam sticking out at an angle is a device R came up with to prop up the eucalyptus tree, which was tilting at an alarming rate. It still has a lot of filling in to do, but the ‘Bright Edge’ yucca has already produced several offshoots, and the sedums are beginning to spill over the rock edging, just as they were intended to do. 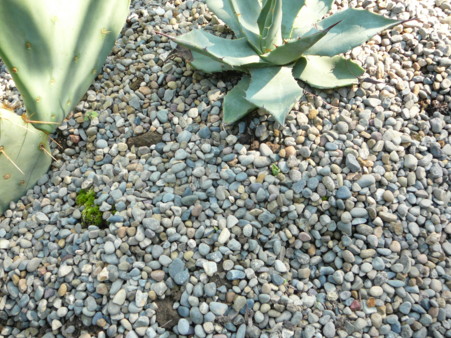 Speaking of offshoots, the Agave neomexicana that I got from Joy Creek in June was originally placed in a deep pot. Before very long, I noticed that it was already making babies. I consulted Loree, the Agave Queen. She advised that the best time to separate babes from mother plant was when they were small. When I unpotted it, I was amazed at the root growth that had taken place in a very short time, and decided that it was time to liberate it from the confines of a pot. If you look very closely, you may be able to see that it has already produced a new baby some distance away (the spike pointing downward is pointing right at it). 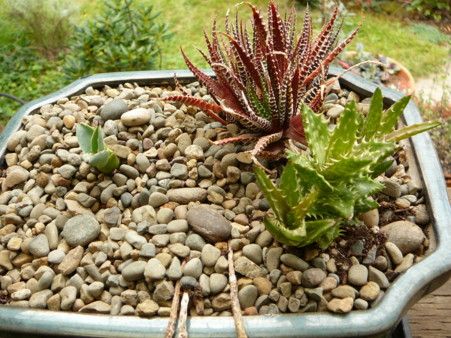 My insurance policy in case A neomexicana fails to live up to its billing as fully hardy, is this newbie potted up in a dish garden that will come inside for the winter. Unless the winter to come dashes my hopes, I may need to start up another dry berm come spring. The kinds of plants in there tend to be habit-forming.

5 thoughts on “the dry berm then and now”