Mothers Day weekend brings the Rhododendron Society’s big sale in the parking lot of the Crystal Springs Rhododendron Garden. Since Richard is a fan, it has become something of a tradition with us. Here is what we came home with this time: 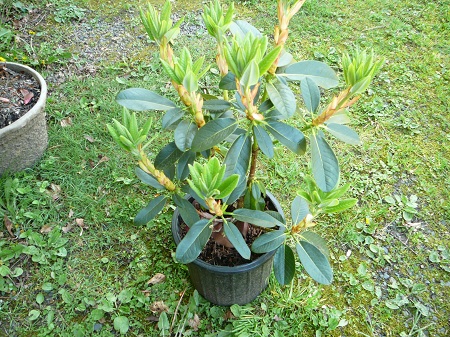 Rhododendron ‘Nancy Evans’ x macabeanum will have creamy yellow blooms with red nectaries (whatever that means). 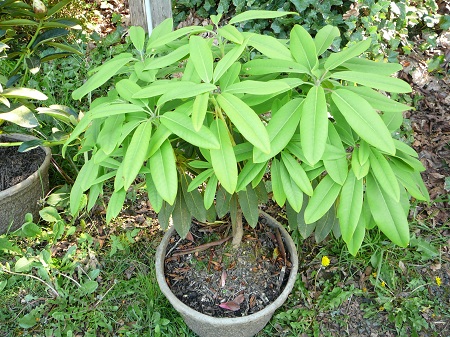 This is the second Loderi in our collection, Rhododendon ‘Loderi White Diamond’. It should get huge in time, with large fragrant ivory trusses. 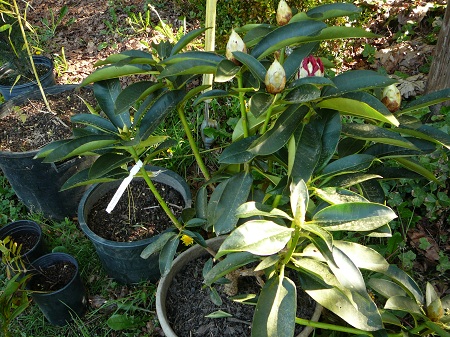 Bright red flowers attracted us to R. ‘Markeeta’s Prize’, even though we have had less than perfect luck with red-blooming Rhodys…fingers crossed. 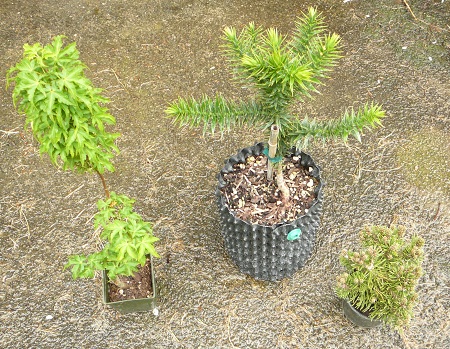 While R was indulging himself, I was off browsing the other offerings. On the left is Acer palmatum ‘Shishigashura’, or Lion’s Head maple. This is an unusual form for a Japanese maple, tall and upright rather than low and weeping. I have been wanting one for years, so I was happy to find this small one in my price range. On the right is Pinus mugo ‘White Bud’, an Israeli introduction with “White buds that glow against the dark-green foliage in winter…”. The plant in the center is a Monkey Puzzle tree, Araucaria araucana, my Mothers Day gift. It is from Means Nursery, but that’s another story.

We though it would be fun to see a nursery and display garden featuring Rhodys to get some ideas about how to combine them with other plantings, so we headed over to Bovees Nursery 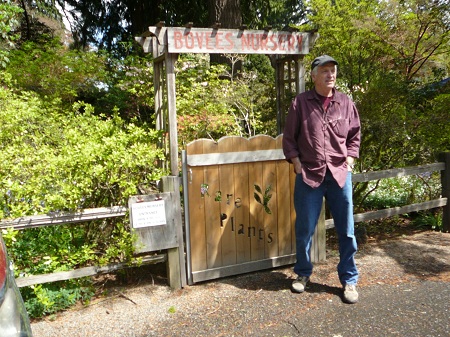 Behind this gate is a fully mature garden made by true connoisseurs of the species. 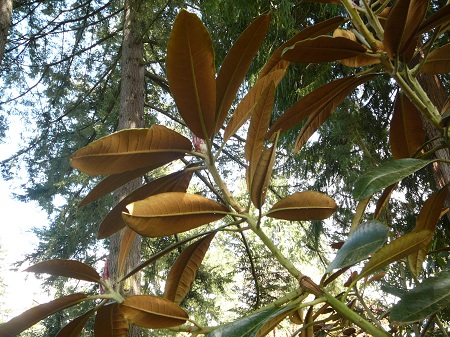 Several of these big-leaved guys took a big hit and were lost, but this one is looking good. 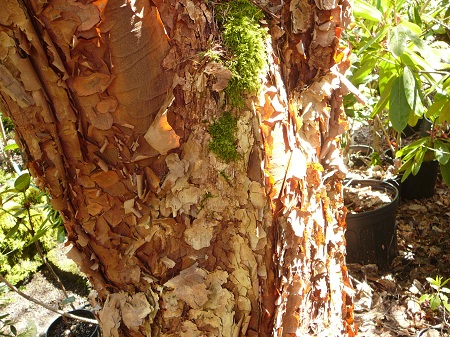 Mature trees like this maple with the beautiful peeling bark provide a canopy of shade. 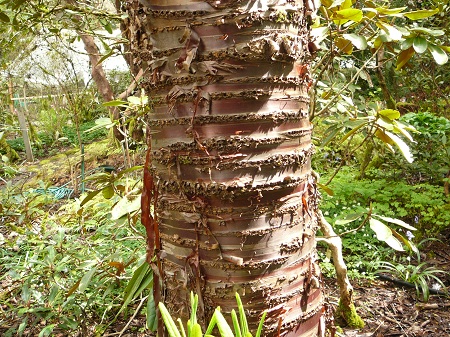 As does this Prunus serrula. 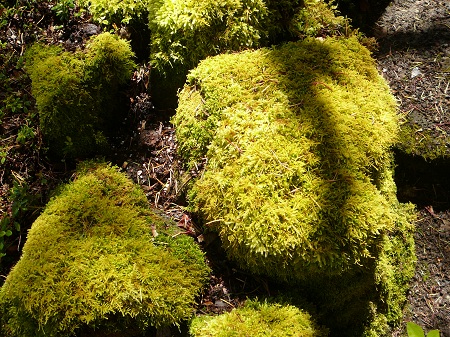 Something to see at every level. Looking down, these moss-covered rocks give way to seas of white anemones as ground cover. 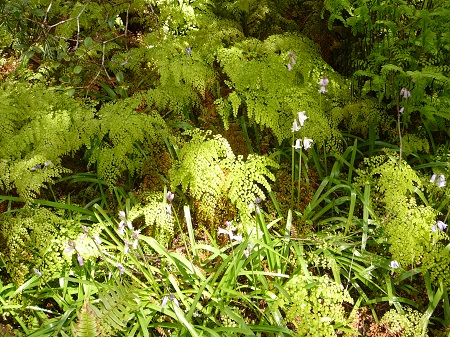 Other parts of the woodland floor are covered in lacy ferns. 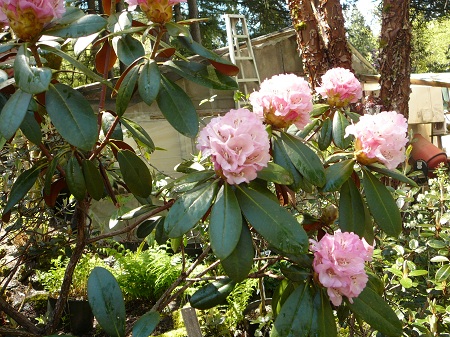 These little pom poms were a form I had not seen before. 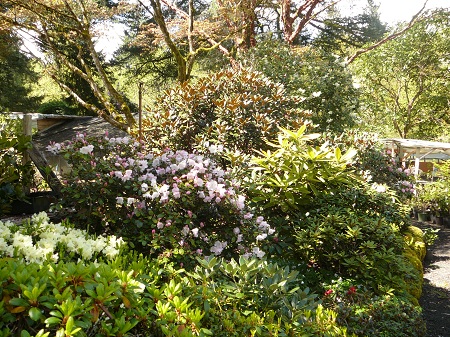 Following a trail around the house towards the greenhouse, we came out of the woods into a more open area just as the sun broke through for a few moments. We spent most of the day dodging hailstorms and cloudbursts. 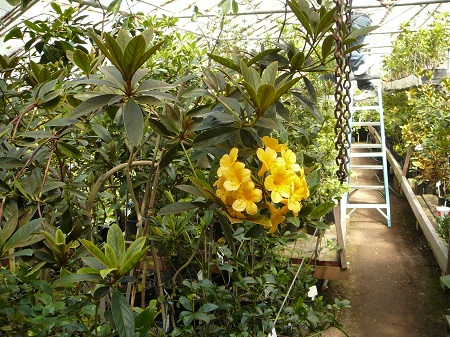 The next few pictures were taken in the greenhouse, where the largest collection of the semi-tropical Vireya rhododendrons in North America (perhaps the world) are housed. 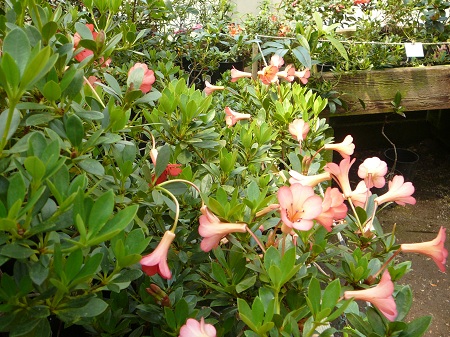 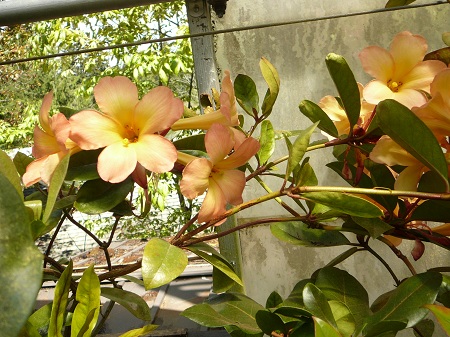 The owners of this nursery are slowing down as age catches up with them. It shows in the haphazard labeling and pricing, as well as their willingness to shoot the breeze endlessly with visitors. We learned a lot, and came away with a warm feeling about the place. We did not come away with any plants. We felt kind of bad about that, but it was hard to tell what was for sale (many areas were roped off with not for sale signs) and nothing that interested us had any kind of labeling. In hindsight we would have made at least some sort of token purchase, but the skies opened and we dashed for the car. Maybe we will go back on a nicer day, pick up an unusual plant or two, and remember to ask about those “nectaries”.