Many of the “friends she never met” have come forward to declare how much her writings meant to them. 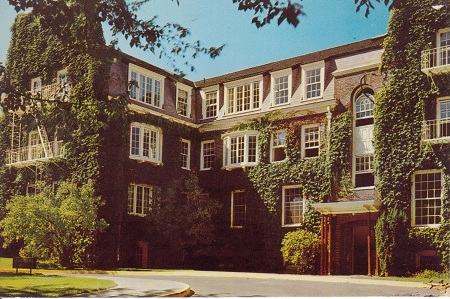 Here is a picture of Hendricks Hall. It sits across from the “Fish Bowl” (the student union) on the University of Oregon campus. We were one of the last groups of girls to use it as a dormitory. No, that is not a typo: I know that nowadays we would be called women, but we were not at all “womanly”, nor did we aspire to be. This was an old-timey dorm, where five of us shared a suite of rooms: a study/living/mostly card-playing room, a sleeping porch and a dressing room, with a large bath shared by everyone on that floor. I loved the stew of students from all walks of life, most of whom I would never have met in my little working class hometown. As you can imagine, the days were filled with drama as we clashed and bonded in about equal parts. By mid-term we had sorted and rearranged ourselves into amiable groups. Dulcy was a mere slip of a girl: an only child who grew up in San Francisco, with the story-telling skills to bring that seemingly exotic childhood to vivid life. She had a dusting of freckles on her peaches and cream complexion and a shy demeanor that belied the rapier wit hiding just beneath the surface (the red hair might have been a clue). It was Dulcy who could build a credible story (and deliver it absolutely dead-pan) to deflect the suspicions of the housemother when she came sniffing around trying to expose suspected transgressions. I was looking through old photos, hoping to find one of Dulcy from those days. Many of the pictures I did find are of roommates whose names are lost to me, but Dulcy (no pix…sorry) was an indelible character. We just happened to be on the sidelines as she struggled to choose among several suitors. She obviously chose wisely, a soulmate who has seen her through to the very end.

Life carried us in different directions, and we lost contact. I was not surprised to see her turn up in the pages of The Oregonian, where she proceeded to win over a large audience with the same humor and self-deprecating manner that had made her a much sought-after friend and companion all those years ago. Her subject was gardening, but it was the warmth of the life stories that so endeared her to her many fans, gardeners and non-. So I join with the many who never met her, but knew her well, in bidding Dulcy Moran Mahar a sad, fond, tender adieu.

10 thoughts on “Dear Dulcy: we miss you already”