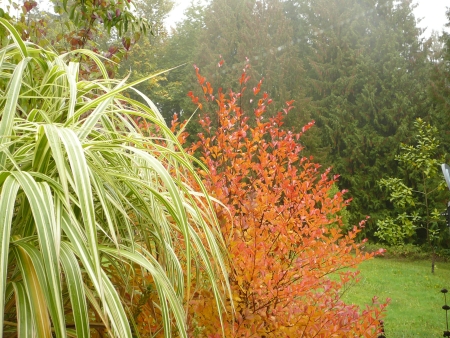 The season may be winding down, but that last act is a doozy. My crape myrtle has never bloomed, but who cares. The foggy mornings set it off to nice effect, don’t you think? 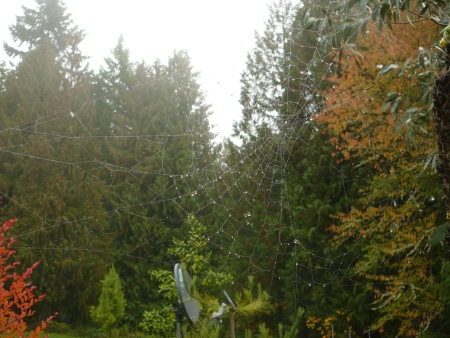 The spiders are in cahoots, spinning webs that catch the raindrops to bespangle the spaces between shrubs. A faceful of silken strands awaits the incautious rambler. 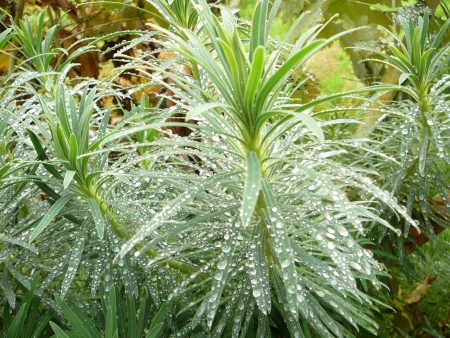 Sporting raindrops as jewelry is a specialty of Euphorbia wulfenii. Mine looked so ratty last spring than I was tempted to dig them out. Fortunately, I took the lazy way and cut them back hard. They rebounded marvelously. 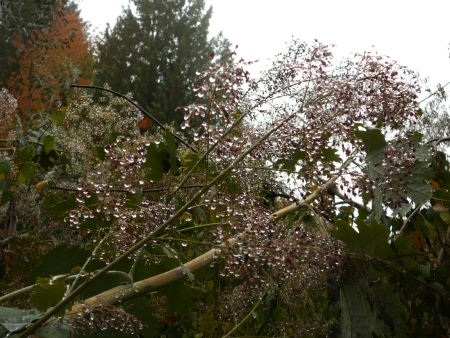 Spent plumes of Macleaya cordata do a good job with the raindrop thing too…one way I rationalize postponing garden cleanup until spring. 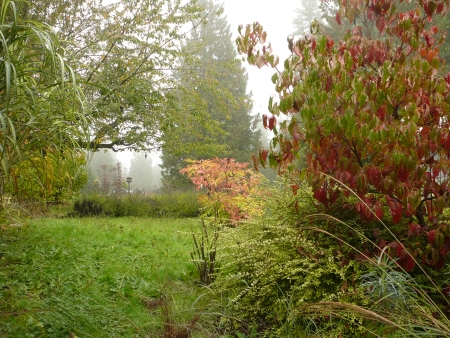 Many of the showy trees and shrubs have flamed out already, but various Cornus species, like the one on the right are still working up to it, as is the tree peony in the center distance. 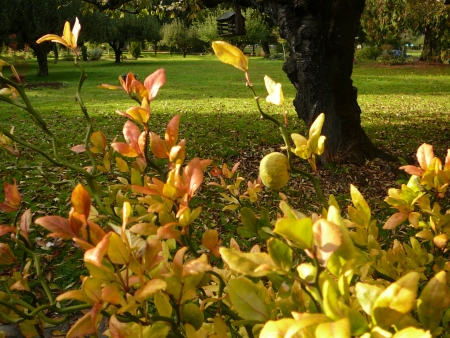 Poncirus trifoliata ‘Flying Dragon’ is at its very best when the twisted, thorny branches are completely bare, but this stage, with the luminous, inedible fruit, is not bad either. 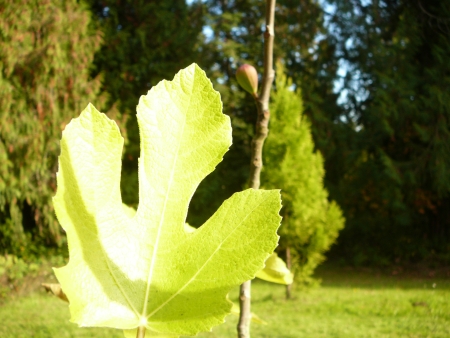 I look forward to one day enjoying an abundance of figs. That little one you see clinging to the branch is one of only three, and it is far from maturing before frost. Last year we had one…my half was delicious. To compensate, the design of the leaves is exquisite, and they turn this buttery yellow before they fall. 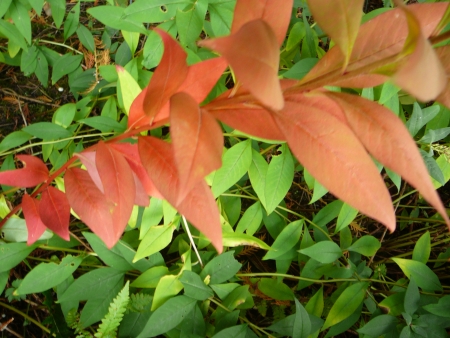 This one is a mystery. In that whole patch of green gooseneck loosestrife only the one stem turned orange and scarlet. What’s up with that? 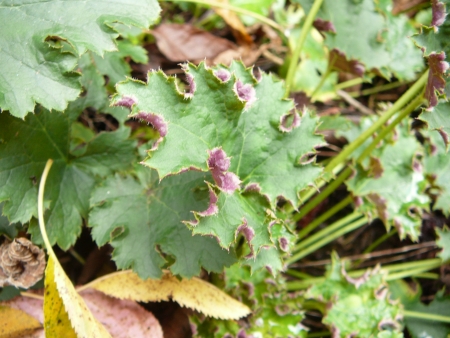 Heuachera ‘Sashay’ maintains its perky personality through it all. I love the way the pink undersides of the leaves peek out around the frilly edges. 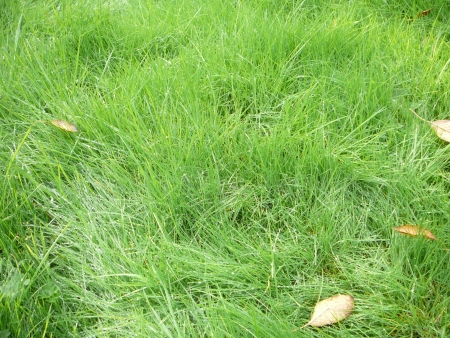 And finally, this patch of grass out back has escaped mowing because it has been too wet. It is ankle deep and swirls in undulating patterns. I do love the rain. If, like me, you just can’t get enough of fall foliage, let Pam show you hers and guide you to more.

I said I had a confession to make, and I do. Everyone was so complimentary about my mushroom bravery, and supportive, too. Well, I had no ill effects from the bits I did eat, but R nixed the meal. Lest you think he was being overbearing, let me explain. A couple of weeks ago, he discovered a swath of mushrooms in a part of our yard. There followed a quest that included poring through the illustrated mushroom guide (inconclusive)
and visiting several farmers’ markets. The mushroom stand guy called his dad (the expert) and described these fungi in detail. The verdict: Black Trumpet, one of the most delectable varieties. When we checked this info aqainst photos, these were definitely not the same. At another farmers’ market, a Croation woman said that she knew mushrooms, and these were definitely edible, though she could not name them. We had a small amount as a side dish. They were good, but not exceptional…certainly nothing to risk one’s health for the privilege of eating.
R is nothing if not persistent, so back he went to the People’s market in SE Portland, where the mushroom vendor seemed to know his stuff. He had a story about a guy who had liked this particular mushroom so much that he ate quantities of it (our field was awash in them). His outcome was not digestive problems, or death, but liver failure. Sooo…much as I longed to cook up my cache, and much as I doubted that anything so subtly delectable could harbor a dark side, I yielded to the more prudent approach. Just this morning I was doing a little more research and discovered that last Sunday there was a free event to hike the trails at Tryon Creek State Park to search for mushrooms, with an expert on hand for identification. I will be on the lookout for more such events. Here is a web site with some good information…and hey, guys, I’m sorry to disappoint you with my less swashbuckling ways…but, well, I’m sure you understand.

12 thoughts on “foliage follow-up…and a confession”