What would you do if you awoke to no electricity? Our first thought was “coffee”, so we headed for The John Cafe in St John’s (sorry, Din, but we wanted breakfast, too). This place whips up a mean omelet, the proportions of which are plenty to split and fuel two people to face the day. That accomplished, we decided to take a trip to Concentrates to check out their new digs and pick up a few things. This was a long drive out into the suburbs of Milwaukie, where they gained a lot of space but lost the funky vibe that was a big part of their charm. Well, the next thing to spring to mind was “plants!”. If we took a particular, circuitous route we could justify winding up at Portland Nursery on Division. 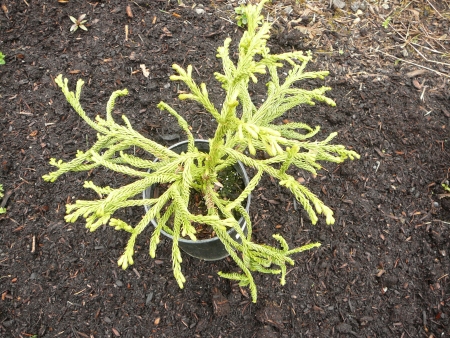 Richard and I have very different taste in plants…which is OK, because we wind up with twice as many whenever we go shopping together. I love everything about this Cryptomeria japonica spiralis: its color, its form and especially its common name, ‘Granny’s Ringlets’. It will eventually reach ten feet, but right now it is no more than a foot high. My kind of gardening is a waiting game. Most everything I am attracted to would be far too expensive to purchase as an adult.The thing is, so much is going on in the garden that it hardly feels like waiting…more like “gosh, look how much THAT has grown while I was paying attention to something else.” 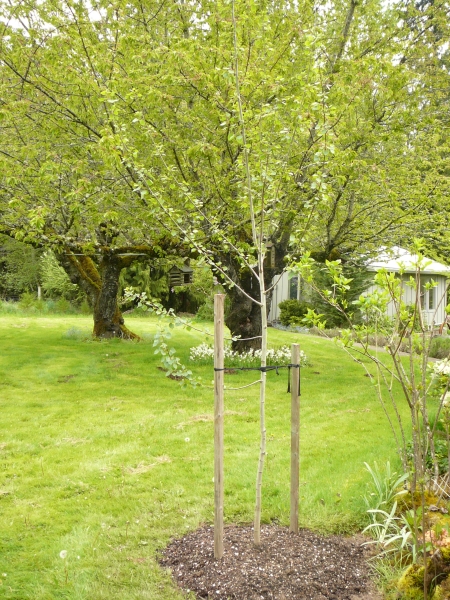 R, on the other hand, is all for instant gratification, so it is a good thing that his taste runs toward the less exotic in plant material. He was after something that would soon provide some shade for the front deck. Remembering the effect of a grove of Quaking Aspen shimmering and golden in late summer at Black Butte, he sought out Populus tremuloides. I quite agree that it will be lovely to have, so maybe two heads really are better than one. 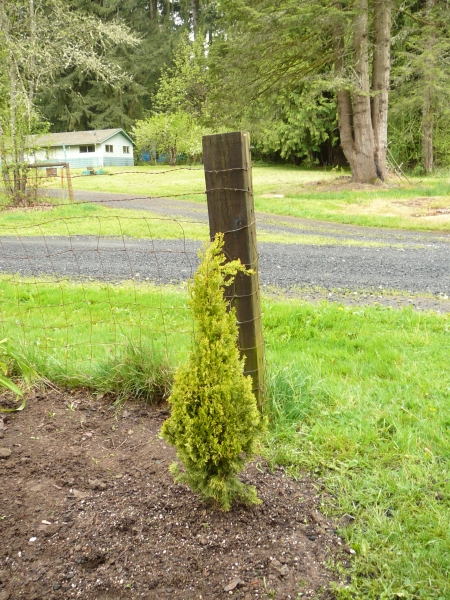 Next stop: Means Nursery. We had agreed that a focal point was needed just as one turns into our drive. There is lots of gopher activity in that area, so several things had been tried, but failed…including a hawthorn tree that survived for six years before all of its roots were chewed away to leave the above-ground part lying on its side, dead and helpless. That was when the plan was hatched to encase the root balls of all new plants in wire cages before planting. That post is about four feet tall, but Italian cypresses grow fast, so ‘Swane’s Gold’ should make its presence known in good time. It will be a nice introduction and segue into the several regular deep blue ones that provide exclamation points throughout our landscape.

R was eager to get started planting, but I had only had my appetite whetted. Off to Cistus I headed. 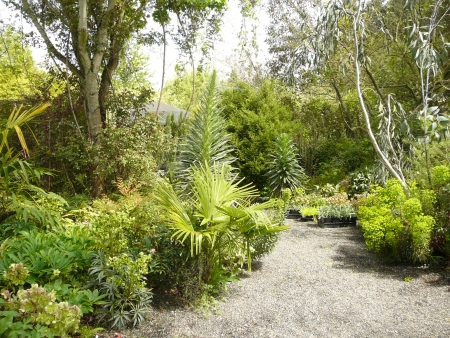 First, a stroll around the grounds for inspiration. It’s a jungle out there, which suits me to a T. 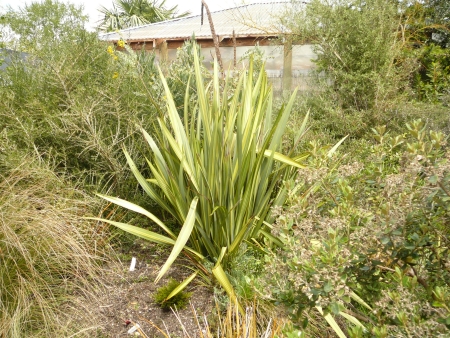 On an overcast weekday with intermittent showers, I had the place to myself. By the time I was ready to call for help, I had forgotten to ask about this thriving Phormium. Clearly these guys have the magic touch. 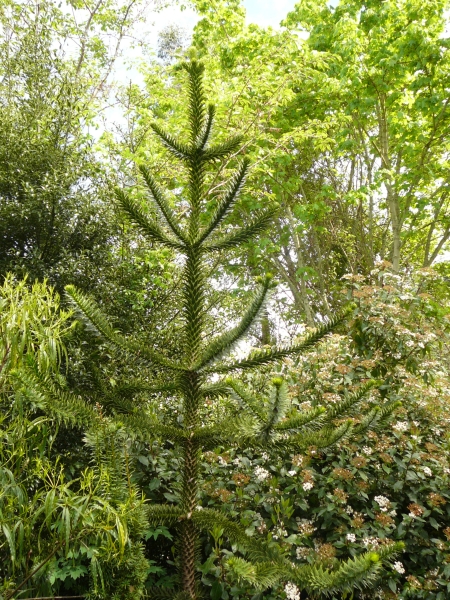 This image will be stored away for when I start to worry about overplanting. 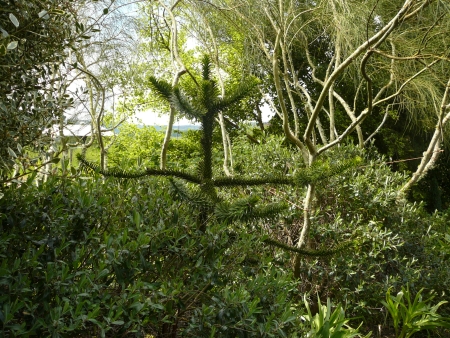 Several Araucaria araucana have been woven into the landscape in close proximity to their neighbors. My monkey puzzle tree looks positively lonely by comparison. 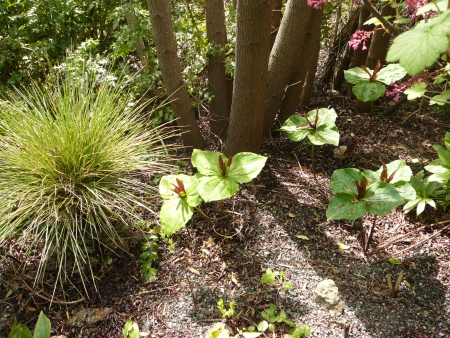 Gravel mulch sets off trilliums every bit as nicely as woodland duff…never would have thought of it. 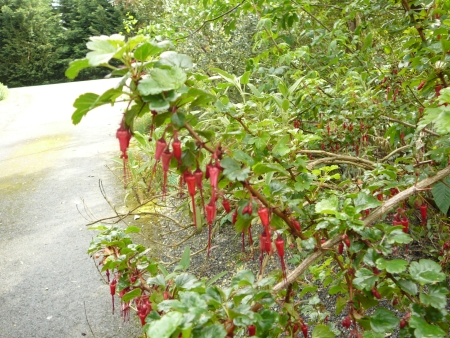 Hanging over the path, these flowers caught my eye. When i found them in the sales area they turned out to be Ribes speciosum ‘Rana Creek’. 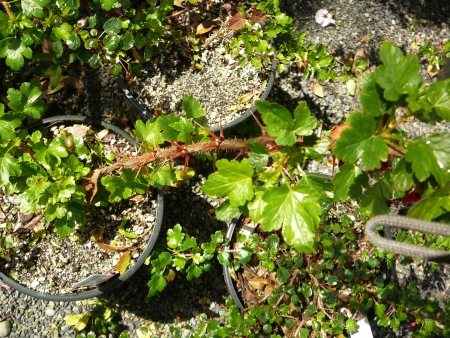 If you look closely, you will see that Rana is armed with very dangerous thorns. 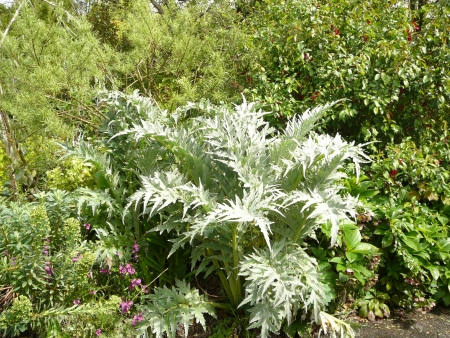 I have always given my cardoons plenty of elbow room, but I like the way it is crowded into a border here. 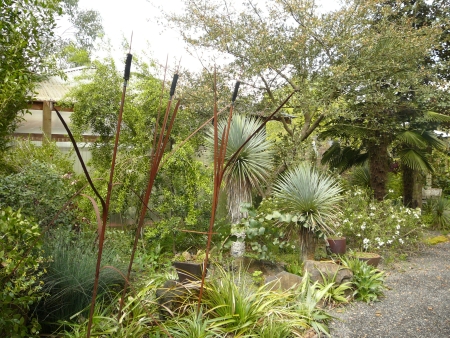 I like the restraint of just a sprinkling of garden art as we close in on the shopping experience. 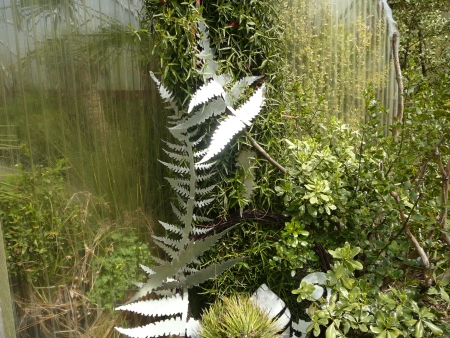 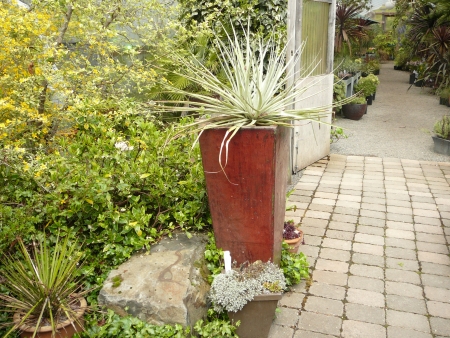 Always the plants steal the show, especially when raised to new heights in a dramatic red container. 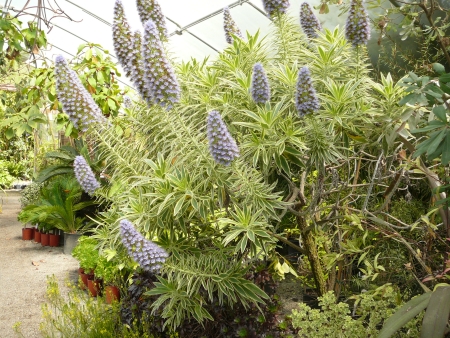 Just when I was beginning to think that I could take Echiums more or less in stride, I stepped into the greenhouse area of Cistus and there was this…Echium candicans ‘Star of Madeira’. Words fail me. 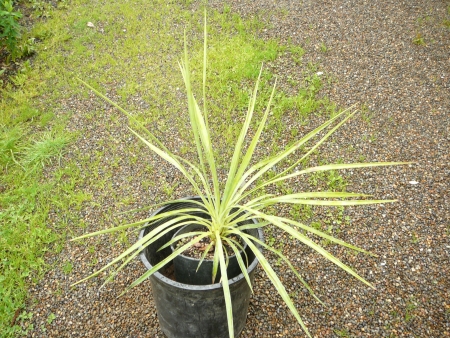 I bought this Yucca aloifolia, which I plan to put in the large green glazed pot (unusual for me to have an actual plan in mind…maybe R’s ways are rubbing off a little). 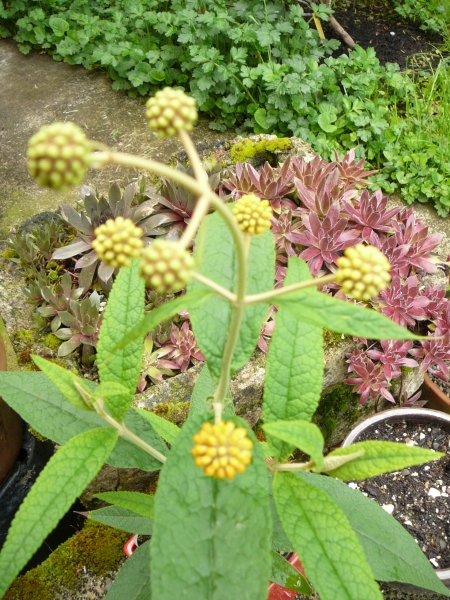 Buddlieja globosa will live in a pot for a while, with Sedum ‘Angelina’ spilling over the edge. Its eventual size is nine feet, and those knobby balls turn bright orange and are fragrant. Once Angie fills in a bit, I’ll show you this interim composition. I also came home with a couple of charming sedums that do not photograph well, at least with my limited skills. By the time I came across Disporum cantoniense ‘Night Heron’, I had blown my budget and could only justify a four inch baby. Visit The Danger Garden and scroll through this post if you want to see ‘Night Heron’ as it should be seen.

One would think that with all the visits to Cistus, and all the posts, it would begin to seem repetitive or boring, but it seems to be an entirely different experience with each visit. I know I will keep going back for more. Would you like to come along?