Excuse me…I don’t mean to go all Biblical on you, but after playing the acquisition game for a while there’s nothing for it but to get some of that new stuff in the ground. And what a day for it! Yesterday was bright and clear and today a gentle rain is watering in all of the new plantings. 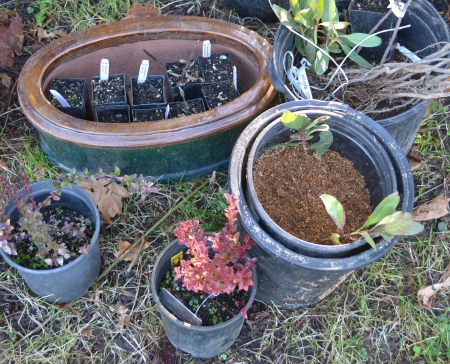 First up, the group of plants I got from the Yamhill native plant sale. A friend told us about this, and volunteered to pick up our plants when he took the drive to collect his. The prices were good, and the website was easy to navigate. I ordered five Camassia leichtlini var suksdorfii to plant at the woodland’s edge, hoping that they will naturalize over time; two Asclepias speciosa (showy milkweed); one Disporum hookerii (Hooker’s fairy bells); three Sequoia sempervirens (coastal redwood); two Arbutus menziesii (Pacific Madrone); and two Cornus nuttalii (Pacific dogwood). I asked Bob to pick up some huckleberries if they had any on hand, and they did, shown bottom left and center. Turns out they had run out of dogwoods and sequoias, so they substituted extra Madrones, a couple of Cascara (Rhamnus purshiana) and nine crab apples (Malus fusca). 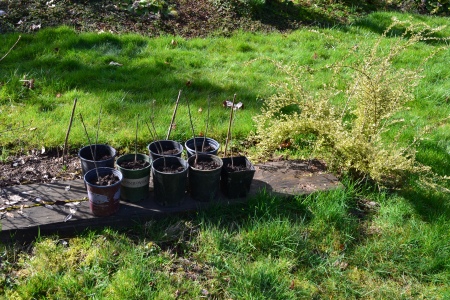 Not sure what to do with all of those crab apples, I potted them up to grow on for a while. They can reach thirty five feet and enjoy moist conditions. I might put a couple of them in the front hedgerow, but if they appeal to you, let me know…or I can bring some to the next plant swap. 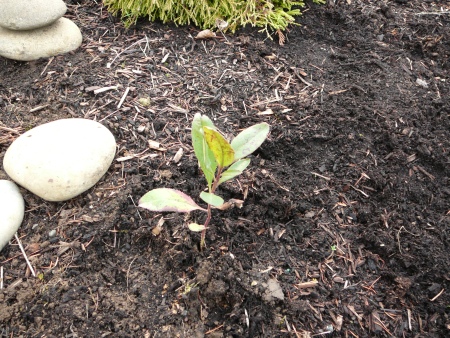 What to do with five Madrones, when they can top out at twenty to fifty feet was an even bigger challenge. Well, they’re supposed to be slow-growing and appreciative of poor soil with good drainage, so I just stuck them at intervals along the border I’m developing approaching the house. We’ll see what happens. I can always cut them down or, if I don’t wait too long, dig them up for relocation. As you can see by the first photo, most of the things in this batch of plants pretty much disappeared when planted. If they prosper and put on a show, they are sure to show up in future posts. 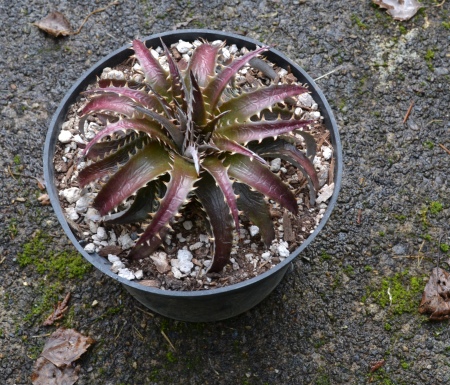 The Yard, Garden and Patio Show came next, and the only plant I bought was this Dyckia hybrid. It is meant to take the place of a deceased Echeveria in a pot of succulents. I hope I will have better luck with this. I rarely go on a buying spree at the show, because I don’t want to haul plants around with me, especially when there are so many stellar nurseries nearby where I can just drive up and load plants into the car. I am kind of kicking myself for not picking up a few of the unusual dahlia bulbs (or whatever you call those things) on offer, though. 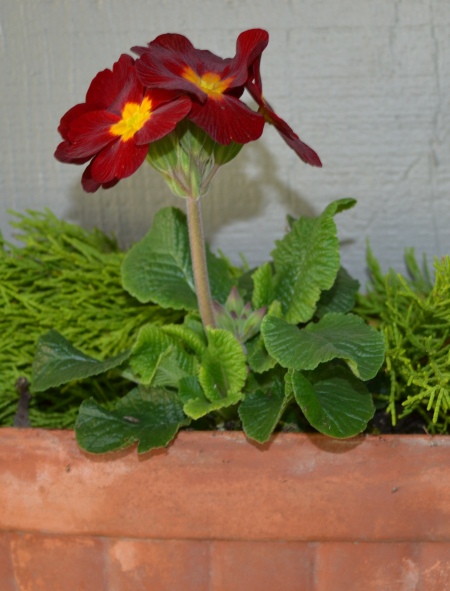 A quick and dirty stop at Means to pick up a couple of things to stick in porch pots yielded this perky Primula Elatior Reno mix (I like the way the flowers rise above the rosette of leaves) and a surprise. As I browsed the tables, a young man approached and inquired if I needed help finding anything. What?! He proved to be quite knowledgeable and friendly, running counter to the reputation of an outlet that has sold boring plants in quantity with no one in the place knowing anything about the merchandise. When I called this to the attention of Ransom, he chuckled and allowed as how that was their reason for hiring him. Guess I’ll be pulling off the road on my way to Freddy’s more frequently in the days ahead. 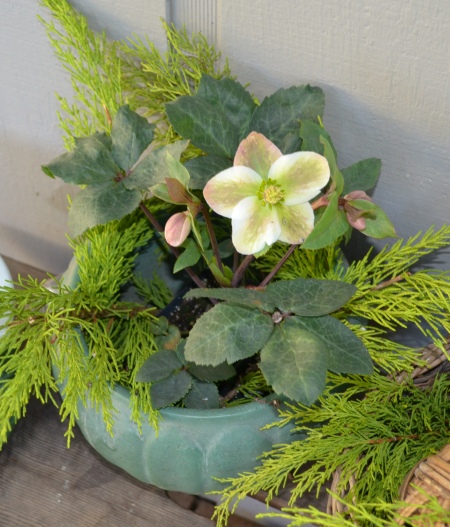 I was surprised to find small pots of Hellebores for a mere $6.50. See how nicely ‘Pink Beauty’ nestles into the cachepot that sits next to our front door? I’ll find it a permanent home later. 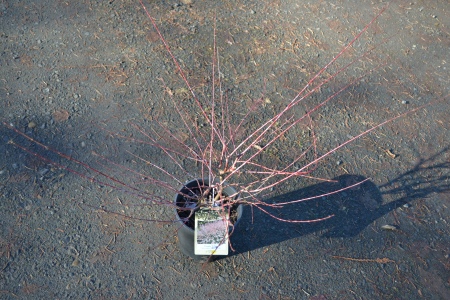 I’ve long admired the foliage of Salix integra ‘Hakuro Nishiki’, but hadn’t realized how colorful the bare branches were in winter. This will be a great addition to the driveway border that is oh-so-slowly coming together. 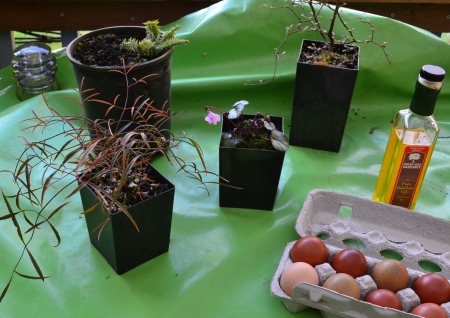 The Open House at Dancing Oaks yielded more than plants. Who could resist the cold pressed hazelnut oil at right? As you can see, we didn’t even try, as we have already drizzled it over the incredible (and colorful) eggs. Front, left, is Nandina domestica filamentosa, which will form a dome similar to Japanese maple, but lacier and more see-through. Behind that is Acanthus Syriacus to add to my “collection” of three. In the center is Cyclamen coum, silver form. New stems form in cunning spirals. This may go under the Nandina. The last plant is hiding beyond the frame, but wait… 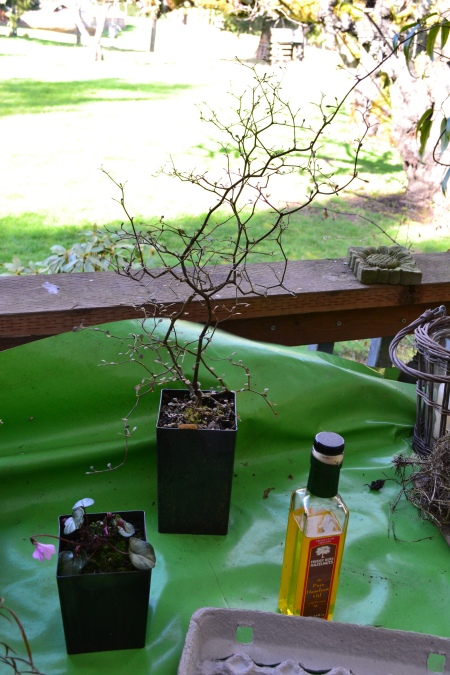 There it is: Corokia cotoneaster and yes, I’m ready to give it another go after having destroyed a couple of them. 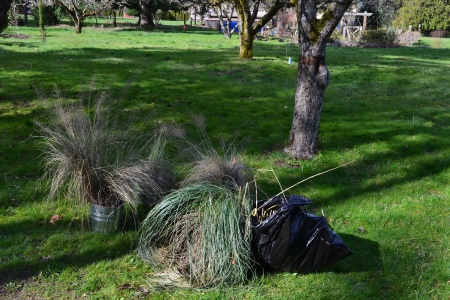 On Sunday, Scott, of Rhone Street Gardens brought me this wonderful bunch of grasses: three Muhlenbergia cappilaris, a huge (like its name) Stipa gigantea and in the bag, I believe, a Miscanthus, but which one escapes me (Scott?). Next time the sun breaks through, I will get these into the ground. Since Scott was mainly making room in an already crowded garden it was not quite a swap, but I did serve pie…and on our walkabout we identified a couple of things he’d like (next time).

Now that I have most things planted, I can forge ahead into Spring with a clear conscience. Hortlandia will be coming up soon, after all.