Not of the thrills and chills, page-turning kind, but puzzlements of the head-scratching kind. 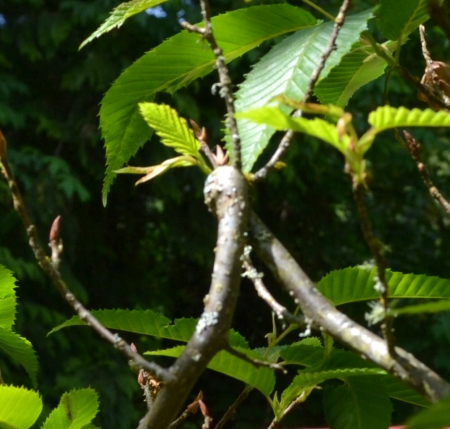 I might have missed seeing the odd kink in this limb of the Hornbeam (Carpinus japonica), had I not been doing some pruning. As taught by Mike Smith at Joy Creek, it requires careful consideration and active looking to do it right. I spared this limb so I can keep an eye on it just to see if it has any more nature-defying tricks to perform. 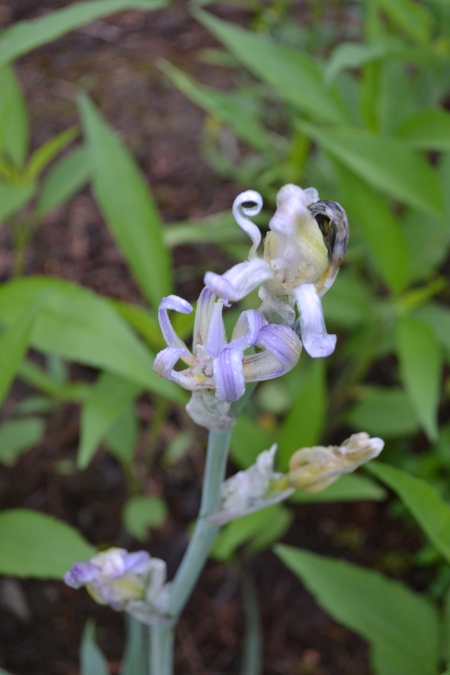 This was supposed to be a regular bearded iris, but instead put forth these strange, spidery forms. It at least sticks to the expected color, which is more than I can say of some. 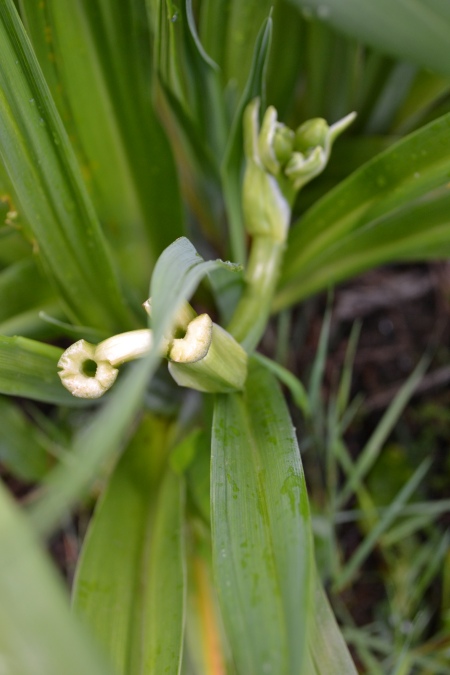 Every year, I find one or two broken stems on Hemerocallis ‘Still Life’. It strikes me as odd: if the deer had taken a liking to it, or if they were simply blunderbussing around, I would expect more damage. Maybe the young ones are going through their vandal stage. 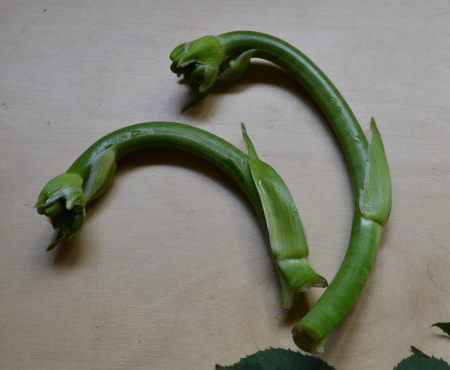 I brought them in to put in a vase. I don’t know if such tight buds will ever open, but it’s worth a try. 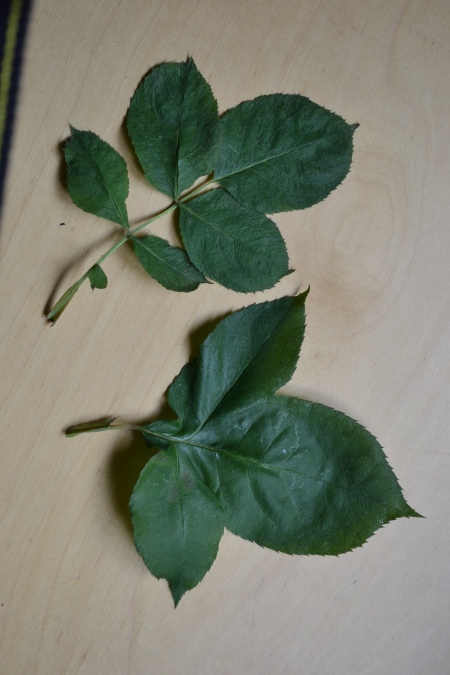 There is a red rose bush right outside the front deck. Its flowers are so heavy that they weigh down the branches, so I pick them in bud to enjoy the heady fragrance. The top leaf is what to expect from a rose. The bottom one, instead of individual leaves, has three that have fused to form a single leaf…haven’t seen that before. 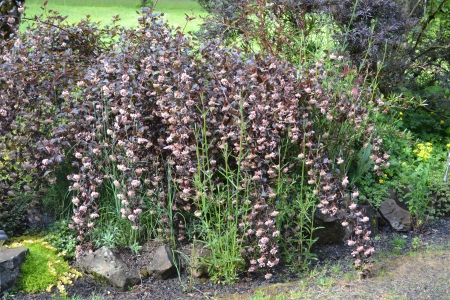 The rains have weighted down the Phsocarpus opuntifolius ‘Summer Wine’ to the point where it is smothering all the pretty little things that were so carefully planned to coordinate with its bloom cycle. Instead of an upright fountain, it has assumed the persona of a cascading waterfall, drowning everything in its path. Of course I failed to photograph this area when everything was in perfect balance. 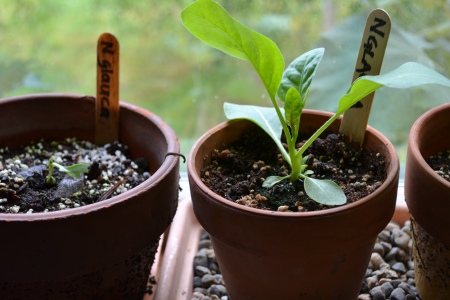 I ordered some unusual seeds and babied them along until they looked like the Nicotiana glauca on the right. So far, so good. I set most of them outside my studio door to harden off and look, on the left, at the bloody stumps that remained when I brought them back in for the night. 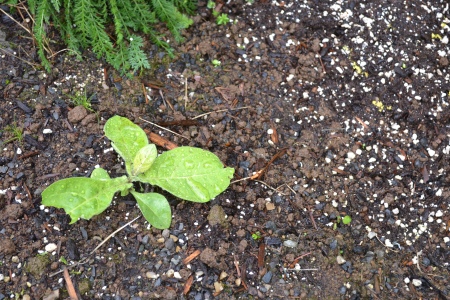 The Castor Bean seedling on the left may be protected by the fact that it is highly poisonous. The Lion’s Tail on the right, though, seems every bit as tender and succulent as the Nicotianas that were right beside them. 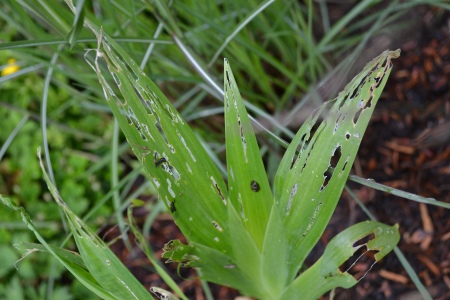 Hostas have a reputation for attracting slugs, but they remain pristine while poor, innocent Iris confusa shows all the signs of recent ravishment. 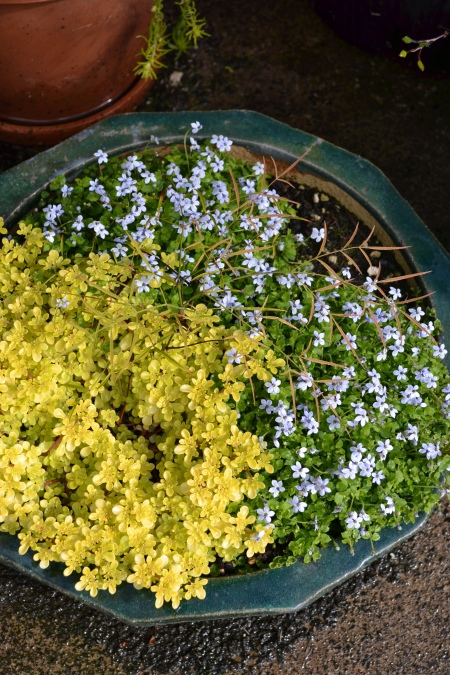 In the “best laid plans” category, the one Sedum makinoi ‘Ogon’ is out-competing the two Laurentia fluviatilis, and the whole ground cover thing overpowers the Nandina domestica filamentosa that was supposed to be the star of this composition. 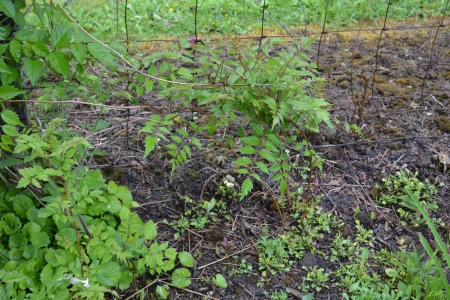 And the Campsis tagliabuena ‘Madame Galen’ that was meant to drape itself over the top of the fence is instead throwing up suckers all over the place. 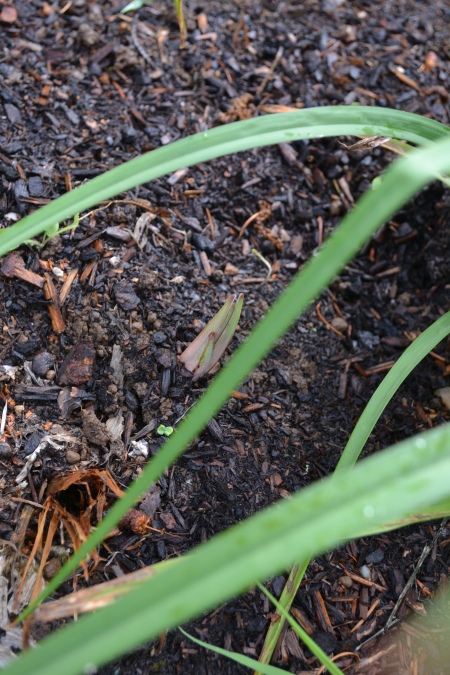 All of my Kniphofias to date have been evergreen, so when K. multiflora disappeared I gave it up for lost and stuck some K. ‘Percy’s Pride’ in that bed to take its place. Now I see a fresh shoot poking its nose up through Percy’s strappy foliage. It will be interesting to see if/how these two learn to cohabit. 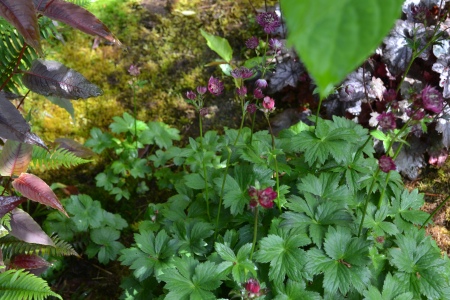 Some of the surprises are happy ones. This Astrantia, having occupied this spot in solitude for many years, is suddenly giving birth to a bunch of young-un’s. Yep, the garden throws new mysteries my way almost every day, and I wouldn’t have it any other way. How about you? Is your plot plotting to stump you in new and intriguing ways? Are any of my mysteries ones you have already unraveled? Do tell!