I just spent some time looking through a grab bag of photos. It’s a good time to take stock of what worked, what didn’t and what to do about it. As our friends across the pond might say, “jiggering”. 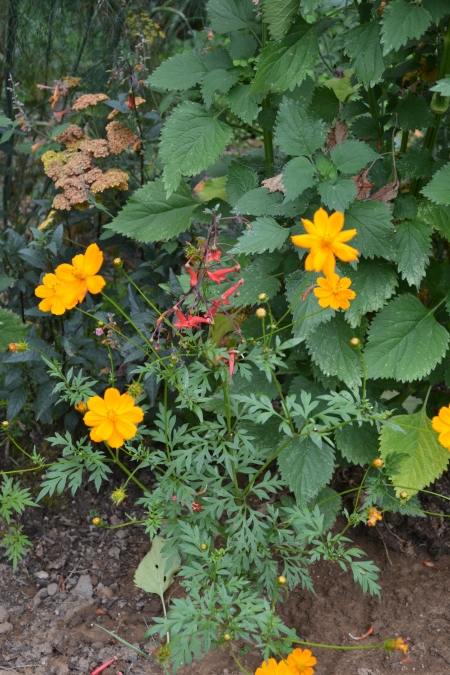 It’s hard to know what to expect when growing something new from seed. The dainty ‘Buddha’s Hand’ Cosmos are not the desired orange, but more golden. 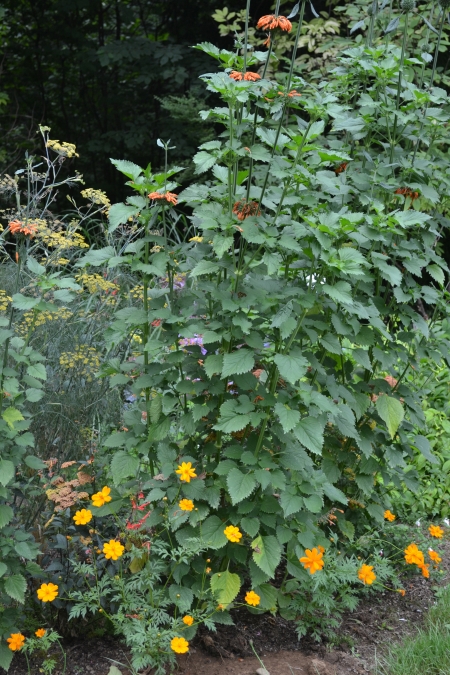 They peek coquettishly through the base of Leonotis, also grown from seed. The Lion’s Tail grew to mammoth proportions, making it a poor choice for placement towards the front of this new bed. 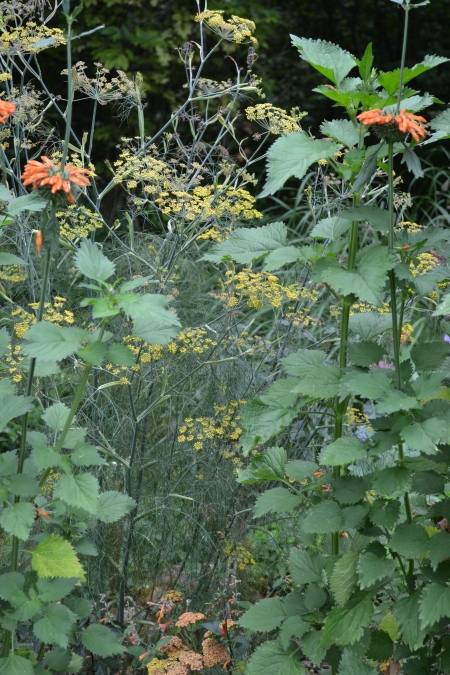 It played nicely with the bronze fennel, but eclipsed the ‘Pretty Woman’ trying to assert herself at the bottom of the photo. 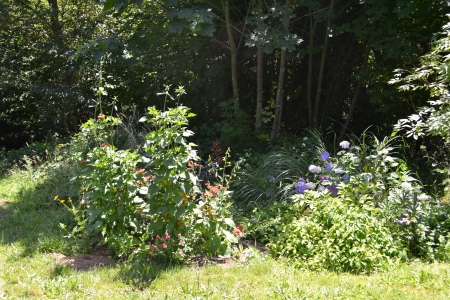 When the rains came, they flopped, squashing all of those little cosmos. This bed is in for a major overhaul come spring. Most of the offenders are annuals, so no big deal. I chalk it up to “live and learn’. 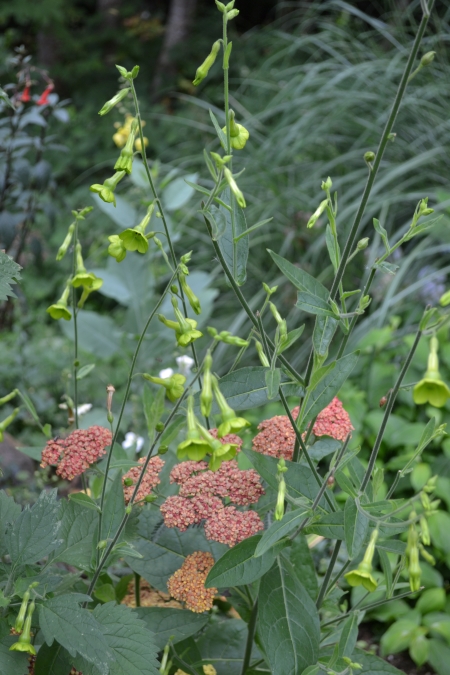 Another annual from seed, Nicotiana langsdorfii, performed admirably. It’s one of those see-through plants, with dangling acid-green flowers rising sporadically on tall stems from ground-level rosettes…and it doesn’t try to upstage ‘Pretty Woman’. 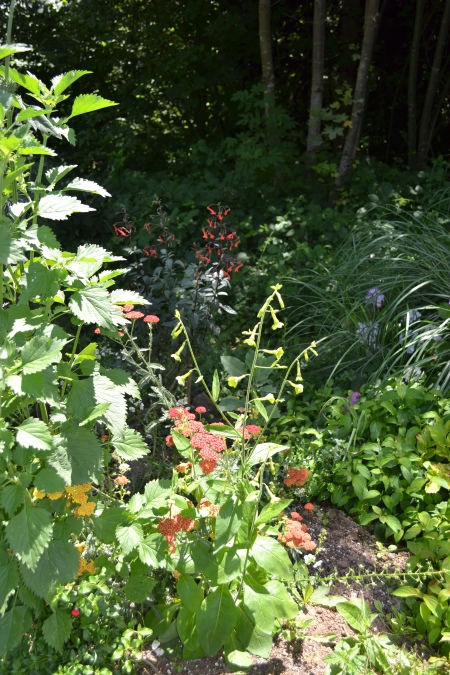 Nor does it obscure Phygelius ‘Devil’s Tears’ at the back of the bed. 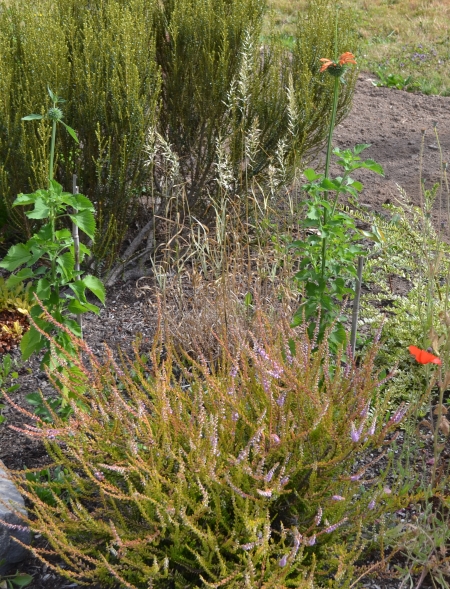 A couple of the ‘Lion’s Tails’ placed in a sunnier location with less water grew to only three feet. Next year, I think I’ll try them along the fence line, where the conditions split the difference. I like them enough to keep trying. 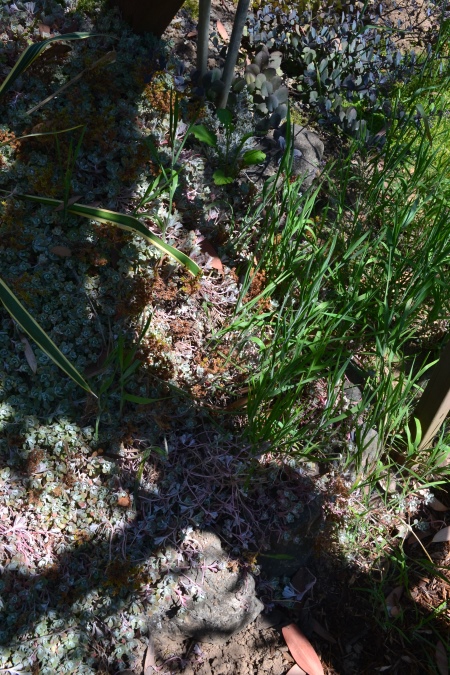 Back in July, the dry berm was being invaded by these annoying grasses. 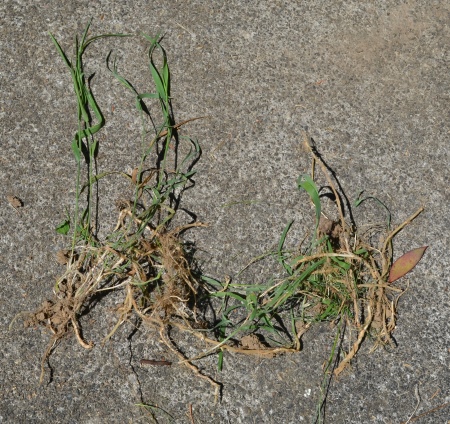 With the help of my trusty screwdriver, I dug deep to remove the roots (well on their way to reaching for China). Now the grasses are back. Maybe not as plentiful as before, but unless I do something they are sure to reestablish their foothold.
When I started this berm, I laid down thick layers of newspaper to smother the grass before piling on the soil mix. I loathe the idea of dismantling and starting from scratch, but a lifelong career of digging out grass roots is not too appealing either. Any suggestions? 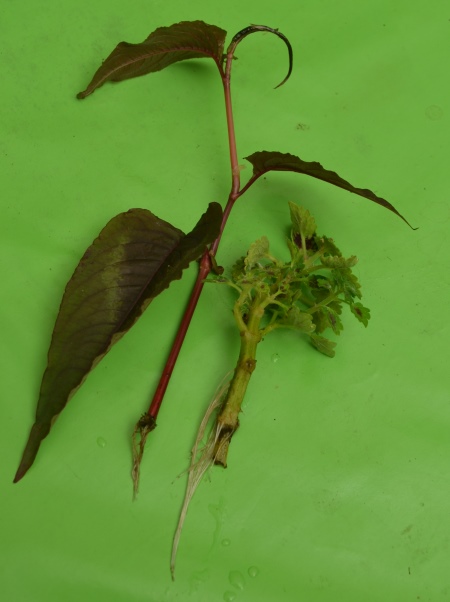 All roots are not created equal. The foliage of Persicaria ‘Purple Shield’ makes a wonderful filler for bouquets, all the while sprouting roots like crazy. Voila! More little purple shields coming up. Same story with the coleus to the right, but I’ll just replace those with new ones next year. 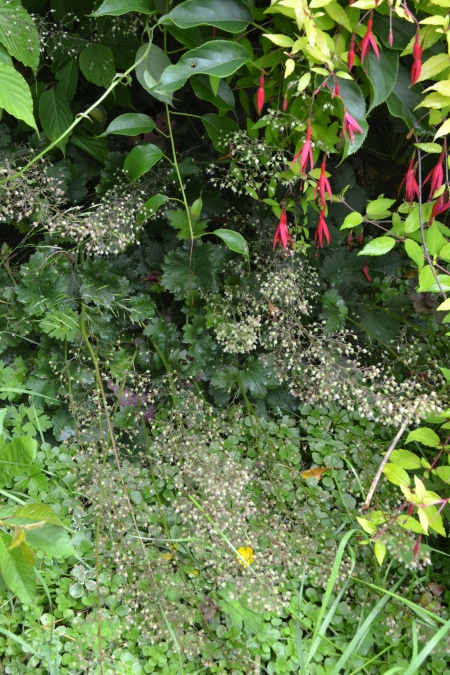 The most interesting feature of Heuchera ‘Sashay’ is the reddish color on the undersides of its leaves. Tucked away in the ground, who knew? 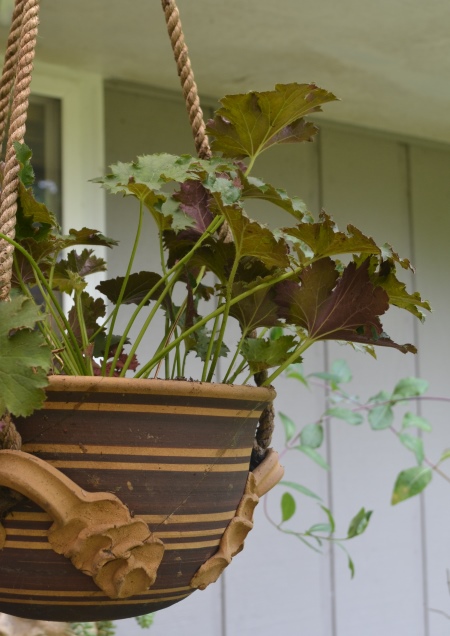 No elevated walls around here to show it off to advantage, but a hanging pot is the next best thing. Once it recovers from transplant shock, I expect a nice glow from those leaves. 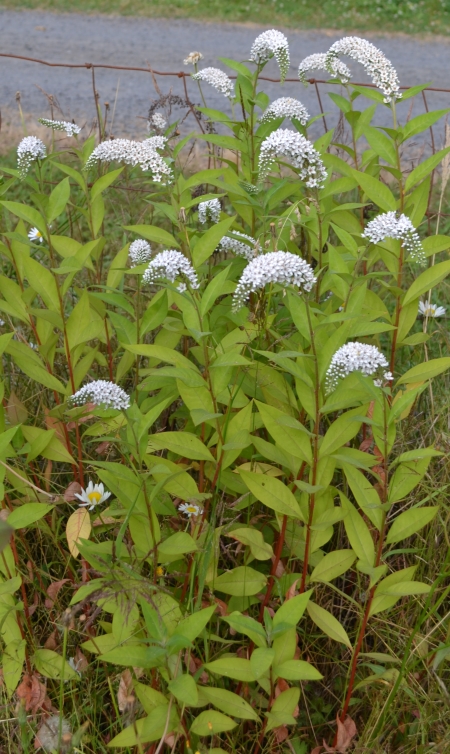 Gooseneck loosestrife is famous for going crazy when it is happy, so I put a clump of it where it would get neither the shade nor abundant water it craves. True, it resists running amok, but it also comes off as somewhat anemic. 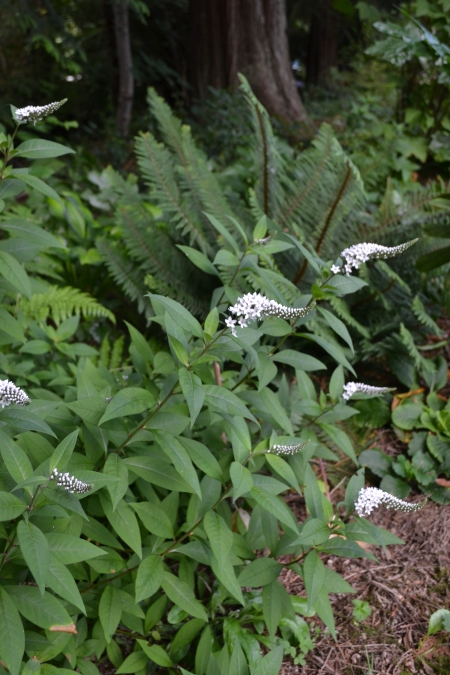 By contrast, in the woodland, the foliage is lush and deep green, showing off those cute little goose heads which I adore. Sometimes a little extra effort to keep things in bounds is well worth it. 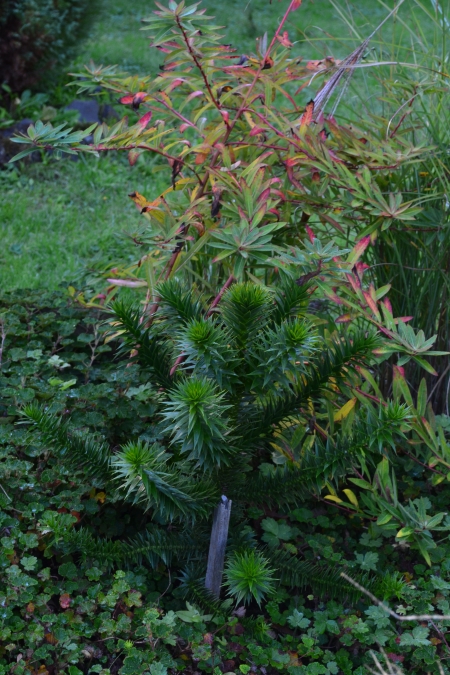 My monkey puzzle tree started out as a mere twig. It is finally beginning to put on significant growth. At Cistus, they have several, and I was taken with the dense plantings crowding around them. Not crowding this close though. Come spring, I’m going to need to find a new spot for that wonderful Euphorbia ‘Fire Charm’. How about you? What needs tweaking now that the season is drawing to a close?