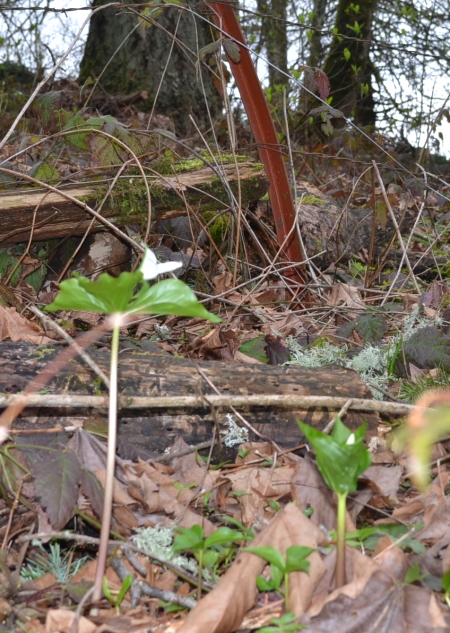 On one of my walks last week, I noticed what looked like trillium foliage emerging from the duff. On the off chance that they had progressed to the blooming stage, I took my camera along yesterday. Sure enough, a few blossoms were in the vanguard. 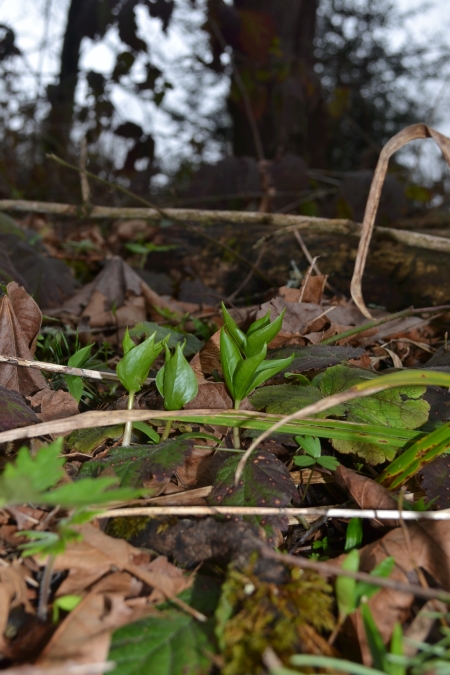 Coming along behind the leaders, I saw lots of foliage. I’m looking forward to a carpet of Trilliums in the near future. I think this wildflower is Trillium grandiflorum, (correction: Evan says it is T. ovatum – see comments) though there are as many as 50 different varieties. Seeing them growing wild in the woods takes me back to the days when my friends and I would explore forested areas on horseback. We were cautioned never to pick a trillium because it would kill the plant. I don’t know if that is true, but it did impart a certain mystique to the pristine flower. 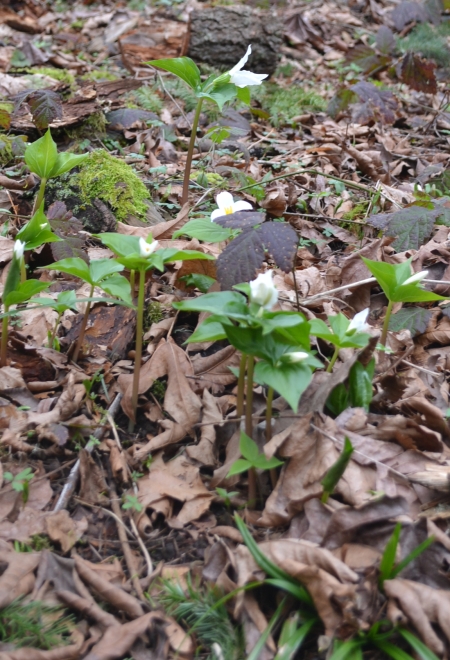 Here’s abit of info taken from The Brooklyn Botanic Garden:

This species is the showiest, best known, and most loved of all trilliums. It is the provincial flower of Ontario, Canada and a highly prized shade garden perennial throughout the world. Its natural range extends from Maine and southern Quebec west to Michigan and Minnesota and south along the spine of the Appalachian Mountains. It grows in well-drained, rich forest soils with a preference for sugar maple and beech forests.

With ants to disperse the seed and suitable soil conditions Trillium grandiflorum can form large drifts over the years. Native Americans used the grated root as a poultice for eye swelling and as a tea to relieve cramping during menstruation. The common name wake Robin alludes to the danger of rousing the goblin Robin Goodfellow if the flower is picked. It may also refer to the plant’s use as an aphrodisiac. Geoffrey Grigson reports in his book The Englishman’s Flora of the “use of Robin as a pet name for the penis.” Author John Lyly wrote in 1602 that “They have eaten so much wake Robin, that they cannot sleep for love.”
The ants have not been doing their job on the one plant in our woodland garden. It continues to put in a solo performance. I did read somewhere that the best time to transplant is when they are in flower, so I may step in and bring some out of our deep woods into the garden proper. I join Danger Garden in posting a garden favorite (hint: hers is not a plant this week). You can participate by leaving a comment with a link in her comments to your “favorite” post. Try it, you’ll like it.

13 thoughts on “Trilliums, a walk on the wild side”