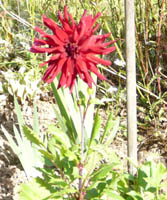 Any time there’s a how-to on dahlias, the advice is to dig them up after the first hard frost. It was more from laziness than from obstinacy that I failed to do so. Lo and behold: the dahlias came back bigger, better and stronger the next year, and an approach was born. Every once in a while, I will lose one from this approach, which might more accurately be called neglect. Take a look at the two pictures here. Obviously, they are not to scale, or the first one would be almost too small to register: it is the one planted in April of 2007. The whole plant is about six inches tall. The other plant tops out at seven feet or so, and has been smothered in blossoms since late July. It has been left undisturbed for three years running. If you do dig up dahlias after a few years, there will be a clump of tubers as big as a bushel basket, some of which might have gone mushy. Best to pry apart the mass, save a few (wrapped in newspaper) to overwinter, throw out any not up to snuff, give some away, and replant some. All your bases will be covered, and what works for you will reveal itself soon enough.