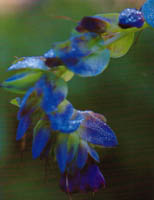 Who could resist falling for a plant as lovely as this? Cerinthe was all the rage a few years back. Of course I had to have one. I brought it home, tenderly tucked it in and watered it. It promptly turned up its toes and I thought that’s that and went on about my business. Not so fast! The following spring, a bevy of these beauties appeared. With nary a thought of the implications of their sudden appearance, I thought OK!

I guess you are way ahead of me here. Yes, that’s right: I have been doing battle ever since with oceans of seedlings from that first failed plant. No wonder we seldom hear mention of Cerinthe any more, though I feel sure, if you listen carefully, it may be being muttered under the breath of the occasional beleaguered gardener on hands and knees. 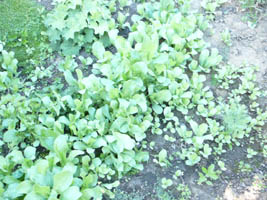 Just lookie here. This is a patch of ground from which all traces of the dreaded plant were eradicated just three short weeks ago. Don’t say I didn’t warn you if you happen to fall for this pretty face.