Many years ago I had a studio in a place called Hillside Center. It was a loose coalition of artists who paid small amounts of rent to inhabit a cluster of shabbily elegant buildings that had once housed a private school for girls. It was perched in a lovely setting, surrounded by trees and upscale neighbors who seemed threatened by what they perceived as an entirely too freewheeling style of life. In truth, my fellow Hillsiders were some of the most dedicated, serious and responsible people I have known, all appearances to the contrary. In a studio near mine toiled a woman whose art had been derived from careful study of ancient techniques lost to us over time. Through her research, she was able to reconstruct formulas and processes to create works of great beauty. Her historical bent extended to all facets of life. In the spring, she would serve a punch she called May Wine. It had a festive air about it, summoning up visions of maidens dancing about Maypoles in gossamer gowns. The celebratory mood was created with humble ingredients (jug wine was the norm among us in those days). I was never much of a fan of Rhine wine, perhaps because the jug variety was my only exposure, but with the added fillip of sprigs of sweet woodruff floating in a lovely bowl with ice, it became something easy to pass off as ambrosia. 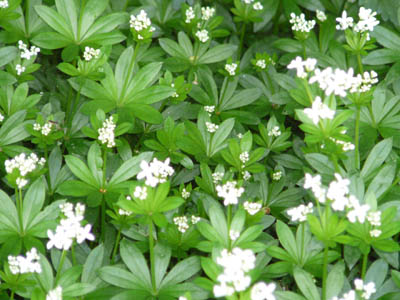 These are memories sparked by spotting the Galium odoratum (sweet woodruff) springing to life when I was tramping around the yard the other day. The carpet of square stems punctuated by whorls of shapely, medium-green leaves is just beginning to produce clusters of diminutive white star-shaped flowers. This is the very best time, because just a few of the flowers have opened, with those to come still looking like white and greenish beads.

Having duly admired the sparkling effect in a shady spot, I logged on to see if I could recreate the spring elixer of those halcyon days. What I found were a number of recipes, all different, with the only common ingredient being the woodruff. What a relief! I was off the hook. No need to feel some historical imperative to use cloyingly sweet Rhine wine. I could invent my own version with impunity. My gardening books described woodruff’s taste as haylike. I would venture to call it grassy, but extremely subtle. The flavor is not the main asset here, but rather the sprightly decorative touch it adds to the punch bowl. A white zinfandel, chosen primarily for its pale blush of color, provides just the right degree of sweetness. The ice cubes could be plain, but why? I chose to make them by puddling a small amount of water in the ice tray with a borage blossom in each compartment. Freeze that thoroughly, then top off with water and freeze again. If you fail to completely freeze the first step, the flower will float to the top and stick out of the cube. I tried making them with tea, but it made for cloudy cubes, obscuring the blossoms. My answer was to make a few plain cubes with tea. Almost any tea that is very pale when brewed works aesthetically. Chamomile introduces another interesting flavor. I like to brew the tea with some borage and woodruff in the pot. After making the ice cubes, I combine the remaining tea with a bottle of white zinfandel in a jar in the fridge. By the next day, it is ready to be strained off over the pretty ice cubes in a bowl, for a party of several; or a glass, for a party of one. Toss in a few sprigs of your floral garnish and prepare to feel like the monarch of May.