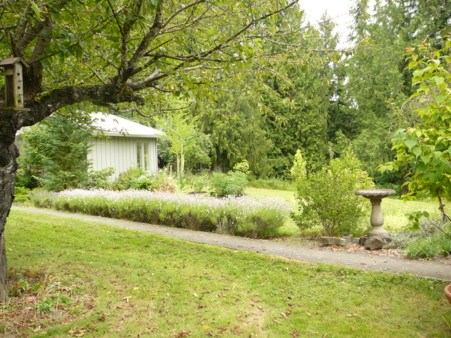 Above is how the lavender walk looked back when it was in full bloom. I think it was a photo in an architecture magazine that put this bee in my bonnet. It showed a sloping field of row upon row of lavender, each individual plant forming a perfect mound. Now, if one were to ask me about my own style of gardening, I would have to say blowsy and undisciplined, as much as I admire controlled minimalism. Oh, well, I guess that is how garden rooms got started: gardeners loathe to commit to one style of gardening figuring out a way to have it all. At the last YGP Show, a respected speaker warned that lavender would eventually turn woody and die, but back when I was contemplating this project, the advice I had seen, and have followed with success for 6 years, was to cut it back by about one third each year after blooming. 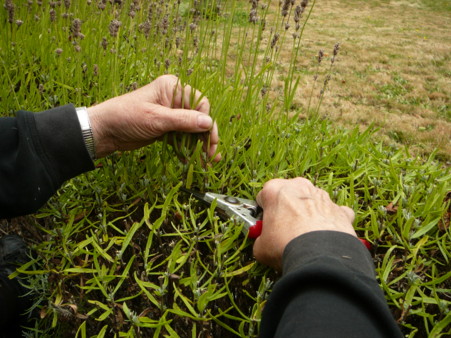 Last year, for the first time, I left this chore until spring. It did not seem to make a difference at blooming, but the plants did seem a little bit woodier at this pruning. The last two days were ideal to the task: sunlight played with the clouds, a light breeze was blowing and this chore could easily pass for aromatherapy. It did take the better part of two days to accomplish, with only sixteen plants involved. That field in France that got me started must have a better method, or a slew of workers. Anyway, I usually start from the bottom, cutting out dead wood (but be careful, not all wood is as dead as it looks), sculpting as I go to form each plant into a rounded tuffet, with the top getting that third removed. The new growth coming along will be a sagey gray-green, while the old stuff will be regular old medium green. Along with the flowering stalks, I take off the first two or three little tufts of new. This is a sitting down job. The perspective is better that way, and my back says “thank you”. 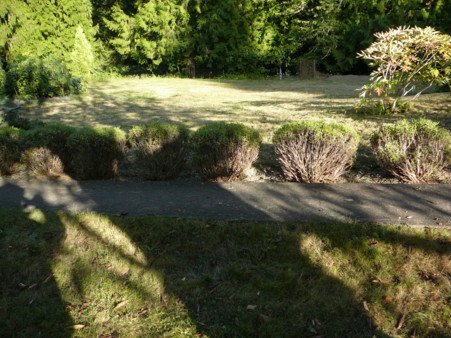 The bed is 30″ wide and the plants are planted 30″ apart on center. In the above view, we are looking towards the SE. From this angle they look like shocked Marine recruits. 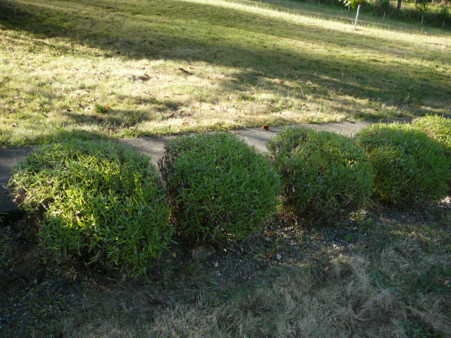 But from the other side the view is just as I envisioned it. Guess the moral to that story is to site such a feature accordingly (not what I did). The brown lawn is a Portland signature. Around here, being green means seeing brown for a good part of the summer. 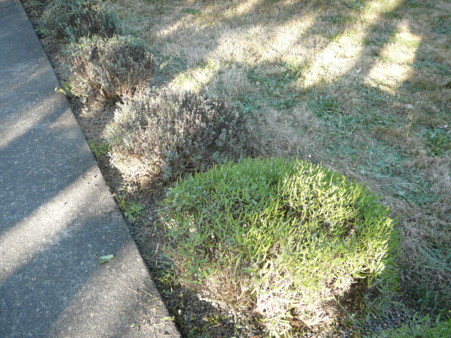 I fully intended the plants to be all of a kind. Purely by accident, three oddballs snuck in. Luckily, they wound up at the end of the line. As you can see, the plant in the foreground is better suited to my purposes. It is Lavenda ‘Melissa’. The others, due to their undercover stealth, are anybody’s guess. I will be on the lookout for two more Melissa’s to replace them. Why only two? Because the gap for people and wheelbarrows to pass through has become overgrown. 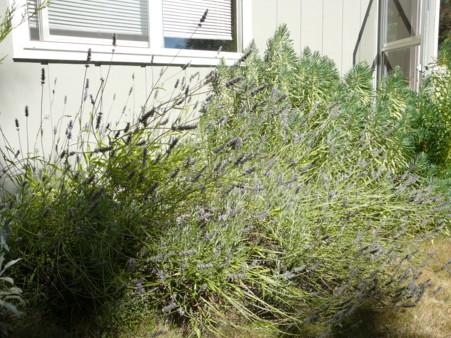 Speaking of overgrown, here’s a lavender more characteristic of the approach in this garden. It is still throwing up fresh wands, and the bees love it. It is a different variety, with longer wands, planted before I paid much attention to nomenclature. Hard for me to say which style I prefer. What do you think?

8 thoughts on “pruning the lavender walk”