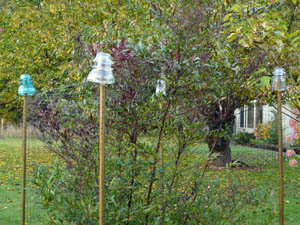 By and large, we take a live and let-live attitude toward the deer. They provide endless entertainment from our dining room windows, and in return, they are allowed to browse at will. I will buy strawberries at the Farmers’ Market because the deer nibble the flowers before they can begin to develop into anything humans deem edible. Trees are a different matter. After the deer stripped a young eucalyptus of every trace of foliage (who knew that they would go for something so aromatic?) a remedy became necessary. Richard drove metal pipe into the ground to support deer netting that would surround each tender young tree. It proved effective and not especially unsightly. Still, those poles seemed to be begging for adornment.

This picture shows a hose guard made by a local ceramicist. I bought three of them several years ago because I fell hard for them. I don’t know about you, but try as I might, I just can’t make hose guards work for me. These beauties sat around waiting for the deer fence epiphany. The stake, meant to go into the ground, fits snugly into the top end of the metal pipe. Cute, huh? The first picture (above) features glass electrical insulators (hope I got that right) slipped over the tops of the pipes. These things always appealed to me, so whenever they popped up at garage sales, I would buy them. Never had a clue as to their fate until now. 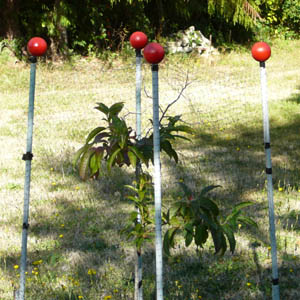 I ran out of stashed goodies before the corralled trees ran out, so off to the local craft store for me. These 3″ wooden balls were intended to become dolls’ heads. With the application of red spray paint and a big long screw to slide into the top of the pipe, they become a variation on my post cap theme.

Visiting gardens and nurseries is a sure way to fill one’s memory banks with ideas . They might mingle in there for years before they pop out disguised as your own brilliant brainstorms. One garden owner (wish I could remember, so as to give full credit) had taken a paint pot to some poppy pods left standing after the petals fell. The result was a surreal parade of sculptural unflowers in an array of colors alien to most gardens. At Dancing Oaks Nursery they had crafted special stakes to hold their collection of electrical insulators, which spring, flower-like, from various beds. In other words, truly original ideas are few and far between, but out of the stew of influences we can often pluck a tasty morsel or two…and, in this case, deprive the deer of a few tasty morsels until the trees get big enough to fend for themselves.