The first project we undertook when we moved here four years ago was this line of lavender leading from the house to Richard’s studio. 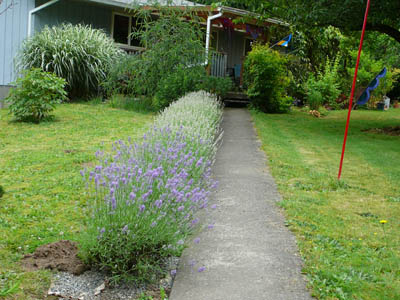 My original intent was to have it on both sides of the walkway. After getting one side into the ground and mulched with gravel, other projects beckoned and side two never materialized. Now that it has reached maturity, I can see that it would have overpowered the walk, had I followed through with the earlier plan. Design by neglect rules often around here. The bed is three feet wide, and the lavender plants (Lavendula ‘Melissa’) are three feet apart. Puny and pathetic for the first couple of years, it now looks like this when in full bloom. After the bees have finished with it, I will prune each plant back to a neat little globe. The gravel mulch needs refreshing about every third year. I put down a thick layer of newspapers under the mulch last time, and am happy to report a sharp drop in weeding chores as a result.

One thought on “the lavender walk”