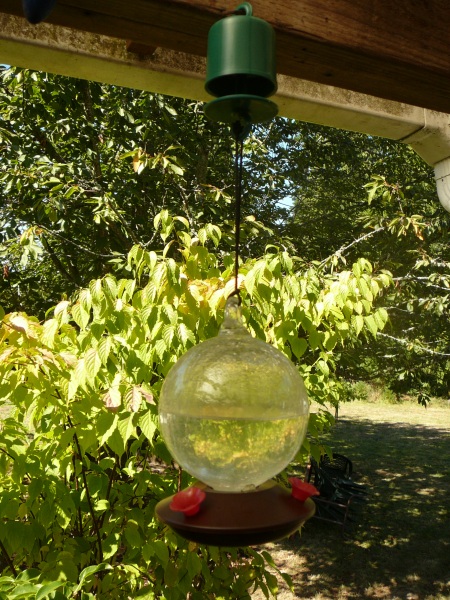 Our cheapo hummingbird feeder had outlived its usefulness. At one time, it had effectively foiled the ants attracted to the sweet nectar, but now they were back and the results were fairly disgusting. At our local one-stop-shopping center, I found this glass ball feeder. It is better than the kind with the feeder tube, because several birds can use it simultaneously. My experience has also been that the rubber nipples on those tubes have a tendency to fall off, letting the nectar drip into a big, messy, sticky puddle. On the same shelf as the feeder was a baffle device to repel ants (it’s the green thing at the top). Guess what? It works!..at least, so far. 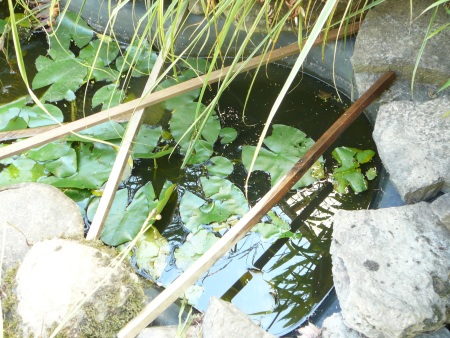 We have tried several methods to protect the goldfish from marauding raccoons. The water lily pads and duckweed give them places to hide, but lately the raccoons have taken to feasting on the lilies. The small stakes placed across the pond are not about to prevent them from having their salad course, but by disturbing the stakes, they signal to the fish to swim for cover. So far, they have avoided becoming the entree.

I have written here about our many pacifist efforts to come to terms with wild visitors. Gophers, on the other hand, have been known to drive the gentlest of souls to acts of revenge. It is only in the last couple of years that they have shown up here. Neighbors who have lived here for 30+ years say that it is a new problem. Our yards look like the battlefield after a cannonade. 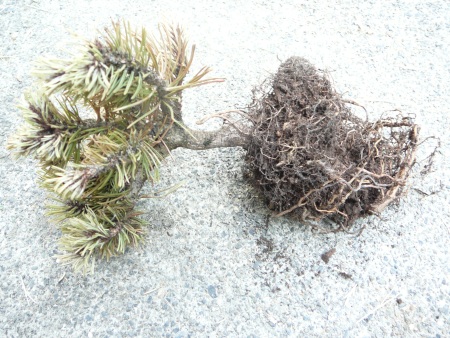 The Pinus mugo ‘White Bud’ is not the first precious plant to fall victim. When something begins to look a bit peaked, we can be pretty sure that when we dig it up we will find the root system eaten away. Sometimes we will find just the tip of a plant showing where the rest of it has been pulled down into the villain’s tunnel.

Last time we went to Portland Nursery, we picked up one of the sound devices advertised to drive rodents mad (or at least drive them AWAY). 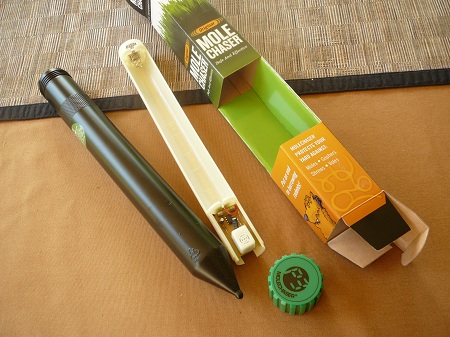 Four D size batteries go into that white tube, which is then inserted into the black tube. The whole thing gets buried in the ground and capped off with that green lid, emitting a high-pitched sound that goes undetected by all but the target varmints for the life of the batteries. It has been successful enough to prompt the purchase of four more, to keep at least the areas close to the house from looking like a war zone. When we first googled the problem, we laughed off many of the suggested remedies as far too violent. As conflict escalated, we found ourselves praising the cats for their hunterly instincts. Yesterday, I caught sight of R oiling and cleaning his .22