As the days shorten and the light takes on that golden quality, making the end of the growing season equal parts poignant and glorious…the bloomers that strut their stuff late are especially appreciated. Here are a few from my Portland, Oregon garden: 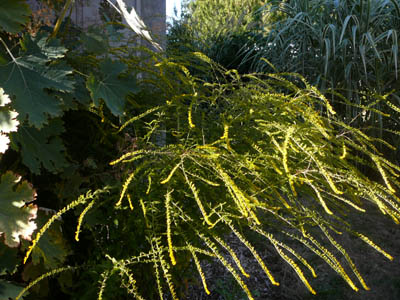 Solidago‘Fireworks’ has been working up to this moment for weeks. It is at its most photogenic right now, but I treasure it earlier, when the blossoms are still in bud and close observation reveals strings of small yellow beads along the arching stems. It will become downright blowsy over the next two or three weeks, before it is time to cut it back for the winter. 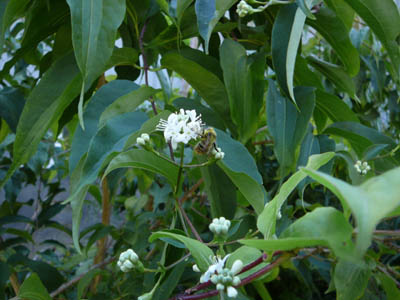 Hepatacodium miconiodes is a small tree with shaggy, peeling bark and an arching habit. The flowers are just coming on, and will leave behind feathery “whatchamacallits” in rusty shades that rival any blossom for showiness. 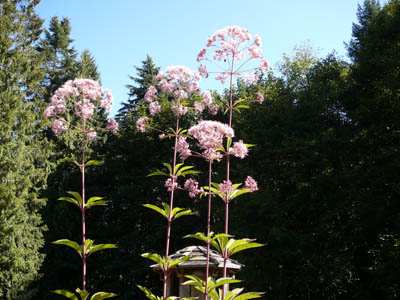 Towering Joe Pye Weed, Eupatorium maculatum set up housekeeping along the fence line with no encouragement. I could not have planned it better. Luckily, it increases every year. 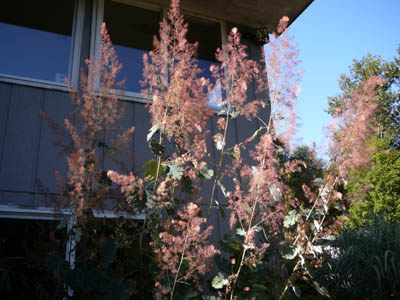 The plume poppies, Macleaya cordata, look a lot like the smoke on a smoke tree. This is another passalong plant from Amy. I have moved it around to several locations since ’99. This is the first site that has met with its approval…on the south side of the house with full sun, plus reflected heat from a concrete patio. 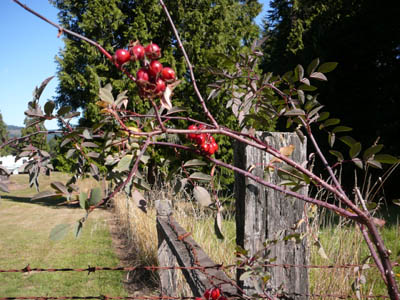 My favorite use of Rosa glauca was in a garden where it had been cut back hard in early spring. The resulting flush of foliage was dense and lush, with that bluish cast above and pinkish undersides. I can never bring myself to wield the loppers as necessary for that effect, because it would mean forfeiting these luscious hips after the fairly insignificant little pink blossoms have faded. The only pruning this shrub gets is done by the deer…not known for their artisty in such matters. 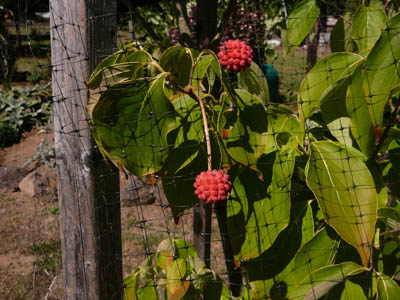 ‘China Girl’ Kousa dogwood is lovely when flowering, but even better after the petals fall and the fruits redden. They are actually quite tasty, but I prefer to let them dry to use decoratively.

One of my favorite plants blooming right now is Belamcanda flava, but I am going to save it for a separate post in a day or two. Please come back to see it. If you have an interest in seeing what is blooming in gardens around the world, click on May Dreams Gardens in the blogroll at right. You will be glad you did.

3 thoughts on “flowers that bloom in september, tra la”