Back in 2004, while I was volunteering at the HPSO spring plant sale, I fell for a most unusual tree. The specimen that caught my attention was a good 12′ tall, with curved, wicked-looking thorns of 2″ or more. Oddly, given HPSO’s penchant for truth in labeling, it bore only the label Hardy Orange ‘Flying Dragon’. The thorns did indeed evoke images of dragons’ claws. The adult tree was for display only, but there were several small ones for sale. Of course I came home with one.
Arriving home in early evening, I joined Richard on the deck for a glass of wine and sharing of the highlights of our days. Turns out, he had gone with his brother to the Chinese Garden in Northwest Portland. He began to tell me about an extraordinary tree he had seen there, but that the docent had declared it rare and hard to find. As he described it to me, recognition dawned. I interrupted his narrative to go to the car to retrieve my newly acquired treasure. Sure enough! We were talking about the selfsame tree. Serendipity, like minds…all of that, but the greatest lesson learned was that the HPSO plant sales, spring and fall, are a terrific place to find rare and unusual plants, as well as all the latest regular stuff. 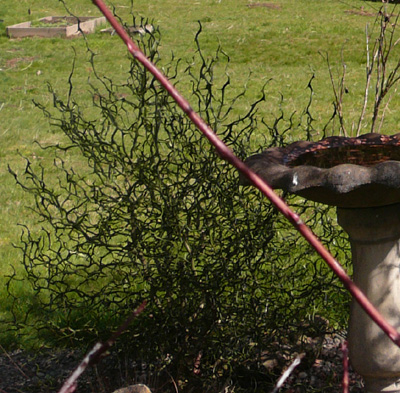 Poncirus is a slow grower, as you can see in the above recent photo (the bird bath establishes scale). I like it best during its dormant season, when the silhouette of twisty, thorny branches is clearly visible. 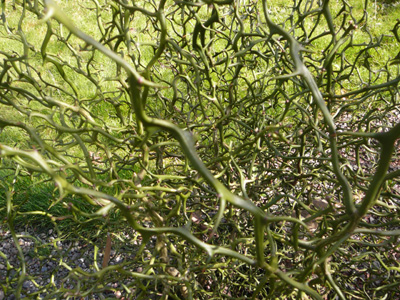 A close-up gives a better sense of the pattern of individual branches. A horticultural friend transplanted from the East Coast tells me that, back there, they are used as hedgerows. Far from being discouraged, the deer plunge right through them, only to come out the other side much worse for the encounter. I could have told them that deer are a determined bunch. 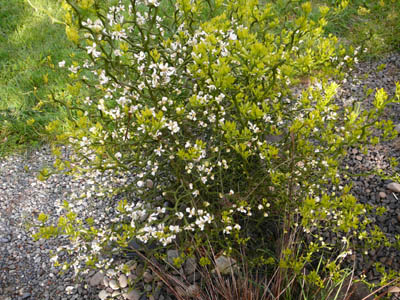 Last spring it put out blossoms for the first time. Can those bumpy green oranges be far behind? This is another of those endlessly interesting plants to watch, just to see what it will do next.