After having worked in the garden all week under mercifully cloudy skies, last Saturday dawned clear and bright. What better way to celebrate than with a road trip? We decided to follow The Oregonian’s advice and go with their “Pick of the Week”. Besides, Richard’s old homestead was in the area, and we thought it might be fun to check it out. We both grew up in and around Oregon City, so it became a trip down memory lane as well as a gardening adventure.

The high school years can leave a mixed taste in the mouth, but at this long remove, we found ourselves viewing the area through less biased eyes. The setting is spectacular, with the confluence of the Clackamas and Willamette rivers, the fishermen in their boats, the lovely old span across the Willamette between Oregon City and West Linn. Rounding the bend, the Willamette Falls dominate the view. Familiarity had rendered them less impressive all those years ago, but now…WOW! Head on, they are bracketed by hulking paper mills on both sides of the river…picturesque in their ramshackle decrepitude. At the end of town, the road curves past a wall of basalt to the top of the bluff, where we could look down on the falls from a different angle. How, we mused, has this escaped becoming a scenic wonder on our state maps?

Following the river past Rock Island, the scene of one memorable canoe picnic, we reached the turnoff for the nursery tour just before entering Canby. Rare Plant Research opens to the public only once a year. I have been meaning to go for years, but finally, here we were. All of the greenhouses, filled with tropical wonders, were open for inspection and purchases. Still reeling from the losses brought on by last winter’s storms, we couldn’t quite bring ourselves to invest in non-hardy plants, so we cruised the area (appreciatively) and moved on.

Amber Hill Nursery was just a short way up Criteser Road. This is a nursery that I have come across time and again at various farmers’ markets. They always have knowledgeable vendors (also friendly) and an array of interesting and unusual plants. I was predisposed to like the place. Other than falling for a couple of trees that proved to be unavailable, we were not disappointed. The nursery nestles in a little hollow with an expansive field on one side, waiting for Wyeth’s Christina to come crawling, and a conifer forest on the other. Display gardens and goods for sale weave artfully around a couple of greenhouses chock-a-block with great stuff. 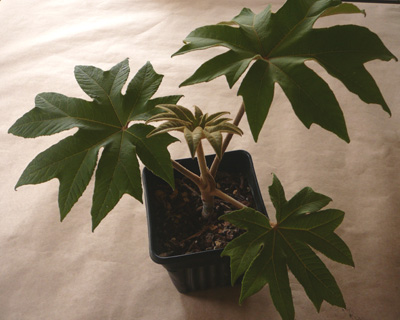 Though our mission was less about buying than about seeing plants in the landscape, Tetrapanax papyriferus ‘Steroid Giant’ demanded to be taken home. Also known as rice paper plant (notice the papyriferous part?), it takes up a lot of space (can’t miss the ‘Steroid Giant’ part)…something we have plenty of. As we headed for the car, someone said, in passing, “hope you have a huge space for that baby.” Yes, we do, and I can hardly wait for it to begin reaching skyward. A friend had one in a courtyard, where it was obviously quite happy. It reached mammoth proportions, the leaves nearly three feet across. In autumn, said leaves turned parchment white (highly appropriate, don’t you think?) and made for some stunning arrangements.

We made one more stop before looping back through Oregon City, this time driving down Main Street. There are signs of life there, after several ‘lost decades’ once the shopping mall sucked the town dry in the 1960’s. We reminisced about the thriving place it was in our youth: the Cochran’s store, with the system of airborne brass cylinders to zip your order up to the mezzanine and then zip the receipt back down; the old, rickety wooden elevator that gave way to the monstrous new concrete one; the stone stairway between downtown and the bluff; Kelly Field, with its covered bleachers…the site of civil war games between OC & West Linn footballers. The renaissance seems to be under way, with new icons for new generations to mourn when they fall.

Continuing the sentimental journey, Redland Road beckoned. Winding our way across streams and through verdant hills, Richard commented that here progress seemed to be working in reverse. Back in the day, most families had some kind of livestock, which kept back the growth of blackberries and grasses now in lush abundance. The people living here now were in it for the ambiance, it seems…no time for chickens and sheep and cows…and what modern kid would knuckle under to farm chores? The old White place was no exception, with fields growing wilder than Cavin would have allowed. The buildings are well kept and freshly painted, and there are more of them. The old pump house has been taken down to the bricks and converted into a charming greenhouse. A metal cutout over the mailbox declared “Howling Wolf Ranch”, but no evidence of any ranching going on could we see…more some gentleman rancher’s fantasy.

In the interest of equal rights to nostalgia, we swung by Oatfield Road to see my folks’ place. It, too, had been altered significantly. We took all these signs to mean that new families were using, enjoying and caring for our onetime homes…a good feeling.