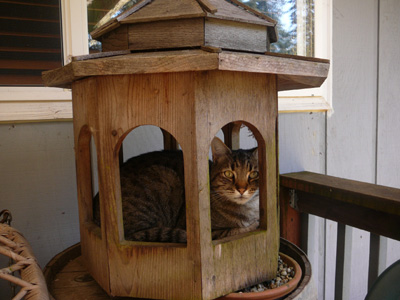 This birdhouse has been sitting on the porch awaiting repairs. Meet Boda, who apparently liked the feeling of enclosure. This cat showed up on our porch one day. He sat patiently until we relented and took him in. Richard read his behavior as Buddha-like wisdom and named him accordingly. Had we waited a bit longer for him to earn his name, it might have been Chauncy. What passed for wisdom is, in fact, a certain witlessness. Living on a country lane, we fall prey to abandoned former pets. Richard has an entire coterie of semi-feral felines who depend on him for shelter and regular handouts. Boda is the only one who got himself admitted to the inner sanctum, so maybe he has more smarts than I give him credit for.