Richard and I grew up in families with very different attitudes towards death and dying. The women in my clan all lived well into their nineties, and by the time they finally relinquished their grasp on life, they had lost any resemblance to the women we admired, resented and cherished. But even when my dad and uncle passed before reaching sixty, there was no funeral, no memorial, no forum of any kind. My cousins and I felt a vacuum, and when it came our turn to be in charge, we instituted a kind of wake/memorial, where we all gathered in some special place to tell stories, pore over family photos, cry and laugh and remember.

Given my background, I never quite understood the pull of the Union cemetery on Richard and all of his kin on Memorial Day. Having recently returned from our most recent trip to Union and points east, I think I am finally beginning to “get it”. It is where all of the family is buried…a place to honor the ancestors and reconnect with the living. 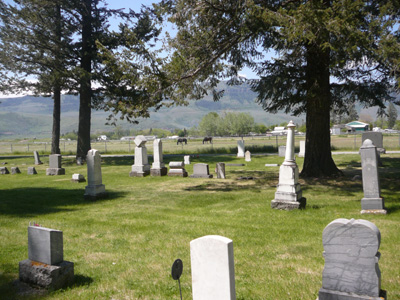 The old part of the grounds has a wealth of monuments, with horses grazing in the distance, 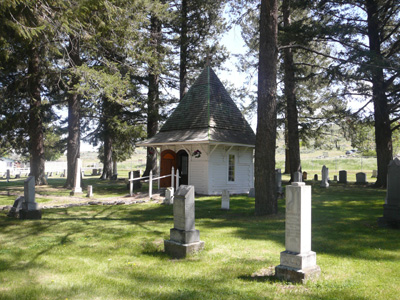 and a small chapel, but few flowers 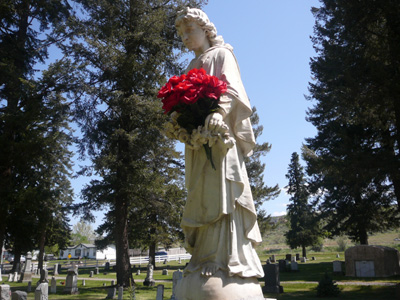 except for the roses in the arms of this most graceful sculpture marking the resting place of a beloved daughter who died young, long ago. I suspect they were placed there for the visual effect as much as anything. 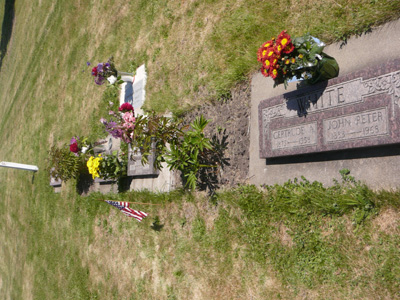 The newer graves are more humbly marked, but well tended and graced with living plants and bouquets of fresh flowers placed there by relatives in remembrance. The groundskeepers put small American flags on the graves of all who served in the armed forces. The overall effect is a kind of mournful gaiety. 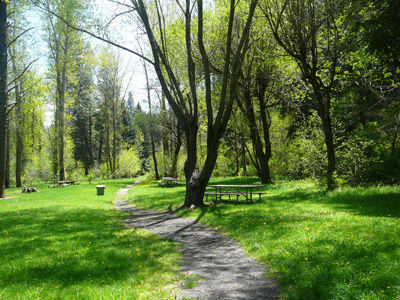 Having duly paid our respects, we decamped to an idyllic spot on Catherine Creek for a family picnic. 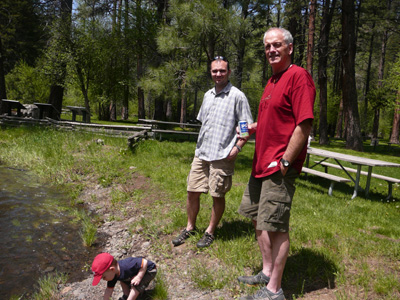 Here is Richard gabbing with Caven (his dad’s namesake) while Corbin (the future) indulges in the endlessly fascinating sport of throwing rocks into the river. 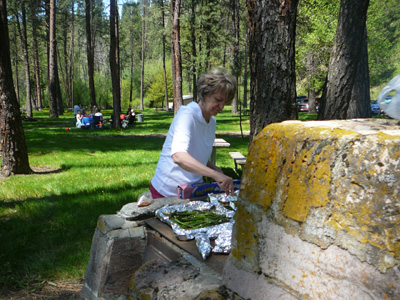 While Connie does some rustic cooking with very modern ingredients (roasted asparagus…yum! 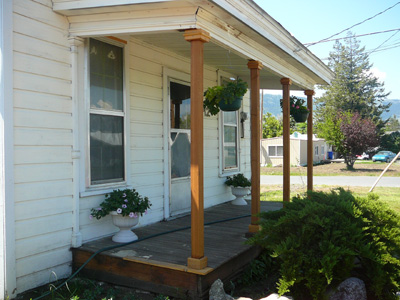 On the way out of town, we always swing by the little house in Union where the White grandparents lived. For years it has been in a state of steady deterioration, and we gird ourselves to find it razed to the ground. Well guess what! Two young men have taken it on. They are pouring sweat, love and imagination into its revival. 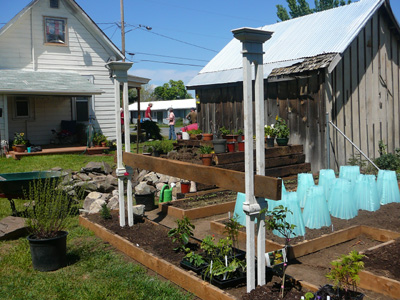 They are planting a garden in newly constructed raised beds, and have incorporated the old porch posts into the design. There will be cascading ponds with a waterfall. They were tickled to learn the history of the place, and, in a quirk of fate, one of them has the last name of White. 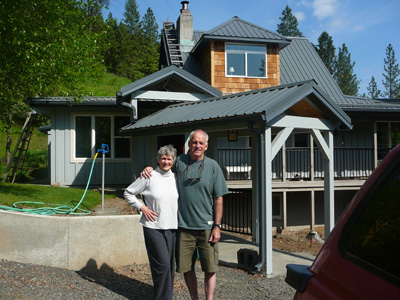 We followed Kathrin and John on a picturesque drive through the mountains to Orofino and wound up here, at their newly remodeled home. What began as a little cabin in the woods has morphed into a grand “spread” that would have made Caven White proud.