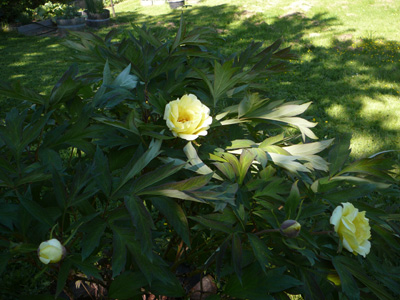 This tree peony, ‘Gold Sovereign’ is blooming right now.Forgive me if I seem to be on a sentimental journey of late, but that just seems to be how it is working out. I promise to move on to good old gossip next time. When my mother died in 2003, the lovely ladies of my book club (the bookies), gave me a gift certificate to Brothers Herbs & Peonies in Sherwood, OR. We pored over the booklet describing the tree peony offerings and marked the ones we liked the sound of. We met the owner working in the field. He was enthusiastic, full of information, and skeptical of our choices. It seems we had landed upon the very plants that were most finicky and hard to please (kind of like our cats). He steered us to some more suited to first-timers, and even so, we were overwhelmed by too many options. After a little haggling, he made us an offer we couldn’t refuse: the two in question for half again the price of one. Gold Sovereign is for my mom, who always behaved a bit like royalty. 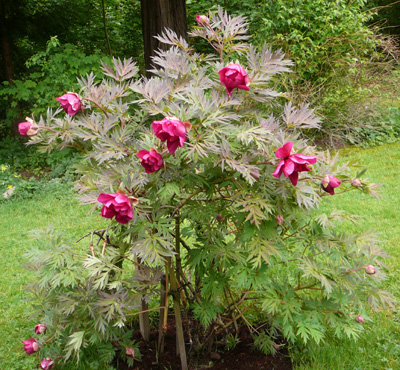 ‘Chinese Dragon’ just finished blooming. Here it is just after a rainstorm had beaten it down. While the yellow one is growing straight and true, with no need for staking, it only produced 7 blooms that drop their petals after only a few days. The red one grows every which way (you should see the jigsaw puzzle of staking and tying hiding in there) and is so weighted down by blossoms that some branches break under the stress.

I asked someone I thought should know about pruning, and the advice was to never prune tree peonies. I used that as ammunition every time Richard got that ‘chain saw massacre’ look in his eye, but as ‘Chinese Dragon’ threatened to self-destruct, I began to think he had a point. I jumped from people I know to the world wide web. Sure enough, no pruning for the first 3 years, but after that a bit of judicious lopping is in order. Info was sparse, but here is what I pieced together: as with any pruning, take out dead wood or crossing branches (this in early spring), thin flower buds to a couple per twig, remove seed heads after petals fall. I also learned that they like to be fertilized in early spring, just after blooming and late fall/early winter with a combination of raw bone meal and 0/45/0. 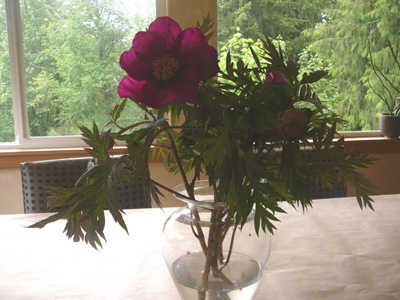 Not that those broken branches went to waste. I earned points by lavishing bouquets on friends and dressed up our own table. Still, Paeonia suffruticosa is said to thrive for a century or more, so I’d best learn to care for it properly until its next caretaker takes over.