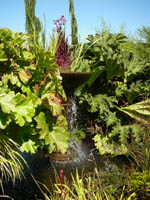 Dancing Oaks Nursery had been on my radar for some time. All it took was a piece, with photos, in the Oregonian Homes and Gardens section to send me to the phone to plan a trip with Amy. It is always handy when your pal is also a design professional. Many’s the time Amy has saved me from horticultural horrors with her vast knowledge of plants’ habits far beyond what goes on the plant tag. And, let it be said, she’s a heckuva lot of fun. So off we went, detailed directions in hand, for a trip through the countryside, with an exciting destination in mind. It was a beautiful summer day, and we planned to stop somewhere for lunch and be back in town by five. Amy had a meeting at five-thirty, and I was going to Nancy’s first public reading at seven.

I don’t want to get hung up on the odyssey of getting there. Suffice it to say that it is on the back side of beyond, and while it doesn’t look far on a map…it is. Even so, it is well worth the trip, and the trip itself is a lovely ramble on the backroads near Salem. It is not only the plants that make this place such a treat (though the plants are glorious, with many I had never seen). The artistic sensibilities of the owners, Leonard Foltz and Fred Weisensee, is evident in every detail, from the generous sprinkling of garden art to the arrangement of plants to the hardscapes and fountains. The photo here is of a water feature in the main plaza. Giant Gunnera leaves surround planted urns raised on pedestals with water splashing from them into the pond below. At water’s edge grow carniverous plants, in the only such display I have ever encountered where they are beautiful and appropriate, rather than simply an oddity. One gets the impression that TRex might lumber around the bend at any second.

There is a pergola that gives new meaning to the word. It is mamoth in scale, built of rustic reclaimed lumber and clad in a variety of vines, to create an inviting tunnel. You can enter in one part of the garden and emerge in another to the surprise of a new vista that had been hidden from view until you burst upon it. Amy and I were in horticultural heaven. By the time we had looked into the heart of every flower, drunk deep of the heady perfume, and set aside a few things that needed to go home with us, it was five o’clock. Oops!

Not one morsel had passed our lips since we had left town eight hours earlier, so there was nothing for it but to stop for dinner somewhere along the way. The guy who rang up our plants assured us that we could take a more streamlined route. Still, it was eight o’clock by the time I arrived at the reading…just in time to hear the poet, and then Nancy. I hadn’t turned into the world’s worst mother-in-law after all…whew. Once the anxiety over missing the reading subsided, I realized: my camera was back at the nursery. I might have slashed my wrists right then and there, if not for the fact that I needed to go to Carlton to install custom banners at Cuvée, and once in Carlton, we would be halfway there.

Richard was very nice about the whole thing. Despite a little grumbling about the long and twisted drive, he was knocked out by the place once we arrived. It was past closing time, but I had called ahead and we were invited to go ahead and look around as much as we liked, and to help ourselves to nibbles in the vegetable garden. It was even more impressive to me this time, perhaps because I was looking more at the big picture rather than focusing on individual plants. As we were about to go, we fell into conversation with Mr Foltz. We learned that despite the remote location, and four hundred acres to act as a buffer, their immediate neighbors are about to put in a rifle range. So much for getting away from it all. As we drove away, Richard paid the place the ultimate compliment by saying that he would like to come back when we have more time…perhaps he has the makings of a plant nerd after all.