I was exhausted from the mad scramble to get the digging and planting and weeding under control ahead of the rain. Not too tired to contemplate a little road trip though. 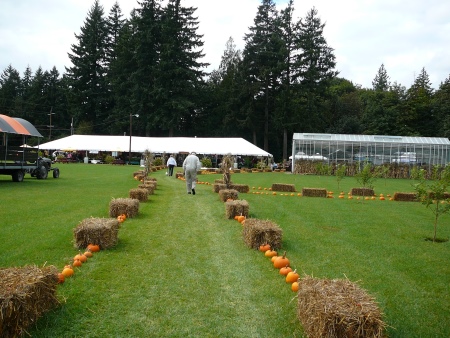 First up, GardenPalooza. See what a party atmosphere they created by delineating pathways from parking with rows of pumpkins punctuated by hay bales and sheaves of cornstalks? Jenni posted about it here, but unfortunately we were there at different times of the day so our paths did not cross. 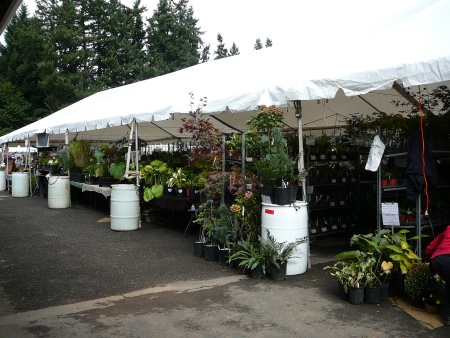 This is the back side of the main tent protecting vendors from the vagaries of the weather. 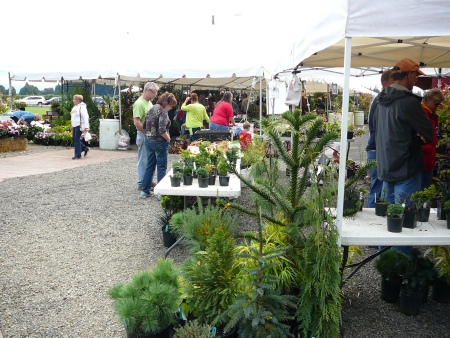 Displays spilled out into the open and into other buildings on the grounds. 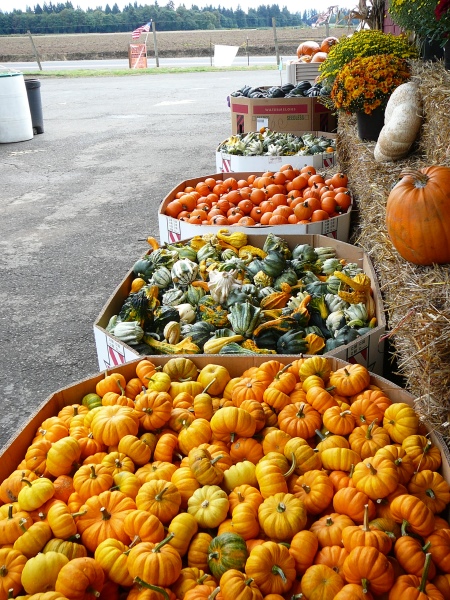 Big bins of farmstand produce and a small cafe with freshly baked goods rounded out the offerings. 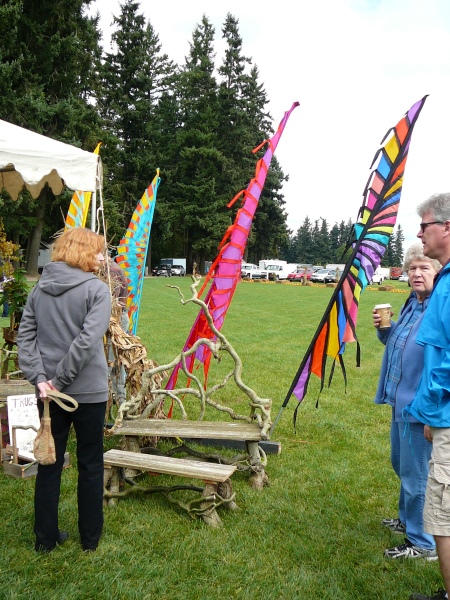 Of course I was drawn to the banners on display. One bore a sold sign…maybe garden banners are catching on? 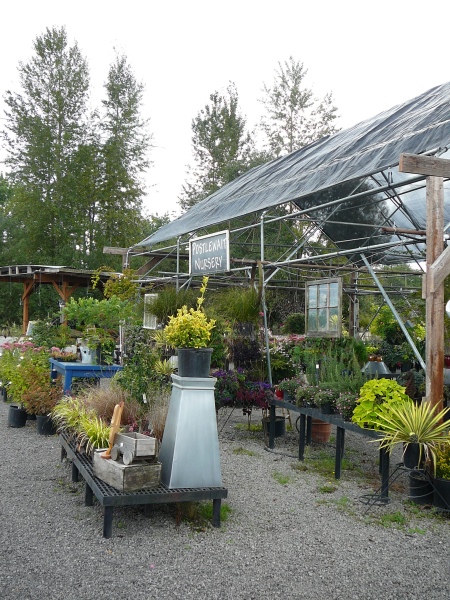 Rather than head back onto the freeway, I opted for back roads. This little nursery does not even appear on the OAN retail nursery map, but there it was, beckoning to me by the side of the road. It exudes a funky charm (and a spirit of trust, since everything was right out in the open with no one around). Center stage, that plant stand is a sheet metal planter inverted to serve another purpose. 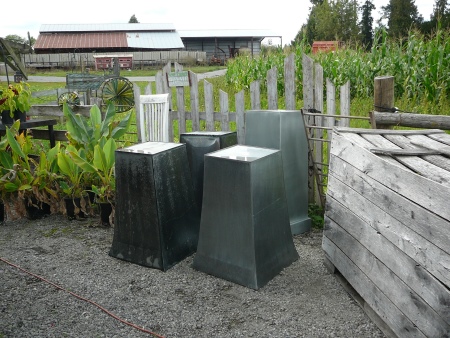 Several more were on sale. That one front right was $55.00 with an extra sticker for an additional 10% off. I thought that sounded like a pretty sweet deal. 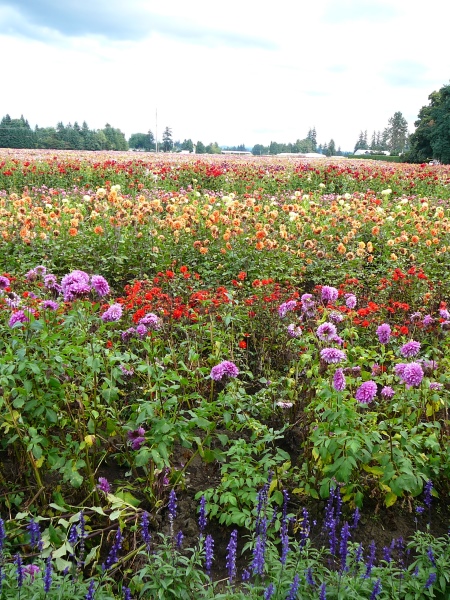 My loose plan was to wend my way to Al’s Garden Center, as I’ve never been there, but then I beheld this sight. 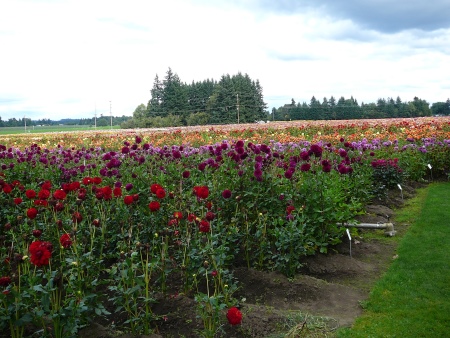 Dahlia fields forever…surrounding Swan Island Dahlias at the very peak of their season. 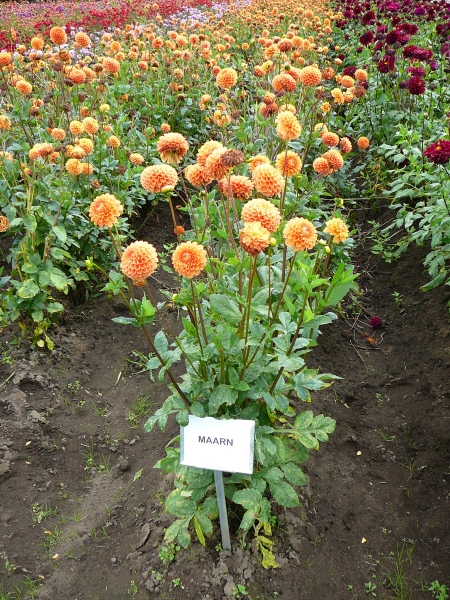 Three rows of each variety stretch as far as the eye can see, with clear labeling at the head of each row. 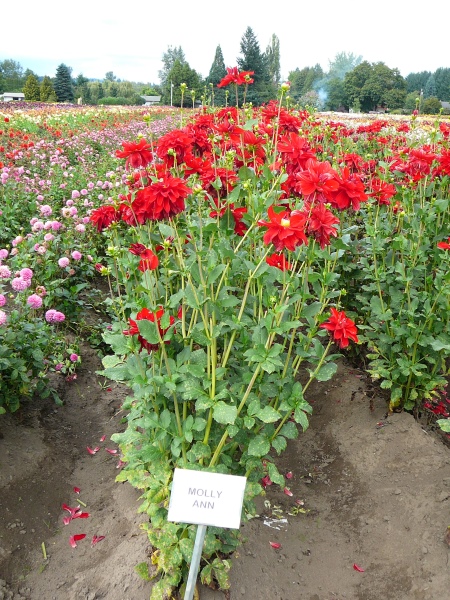 I realized, when I started sorting through the photos, that I was drawn to the reds and oranges. ‘Molly Ann’ is quite tall, and such an electric red that it burns out in the photo. 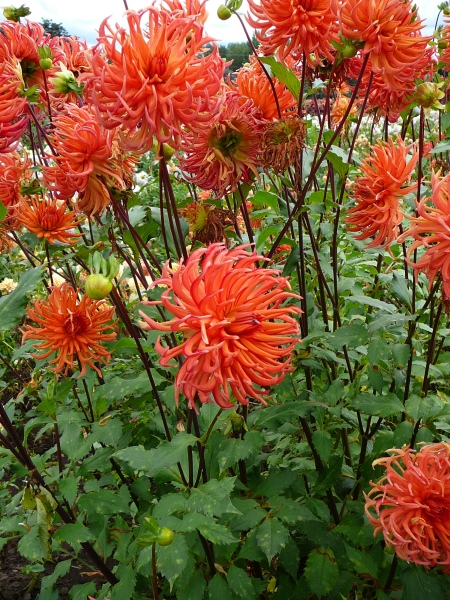 The tousled look of ‘Bed Head’ earns it its name, and get a load of those dark stems. 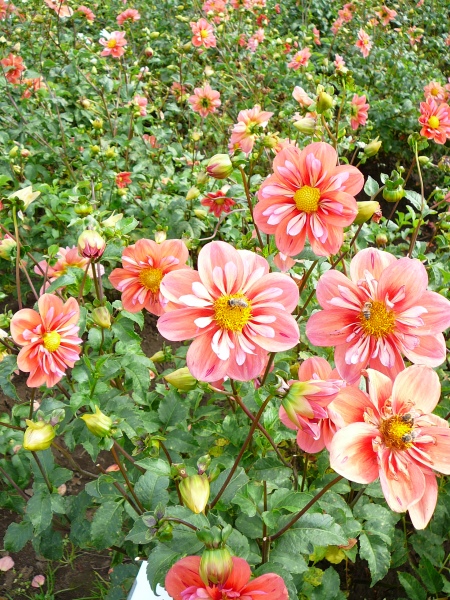 I keep apologizing for the photos, but it was hard to capture the full effect, especially here with ‘Giggles’ that was actually an orange sherbet/lavender/purple combination that fairly danced before my eyes and had the bees giggling all over them. 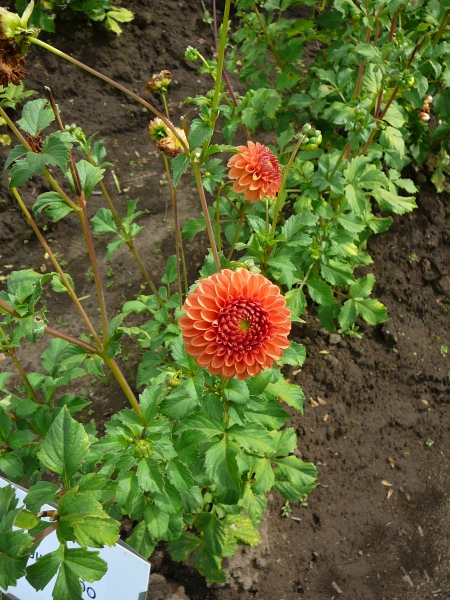 ‘Gingeroo’ comes off better, with its geometric pattern in a tight, medium-sized ball. 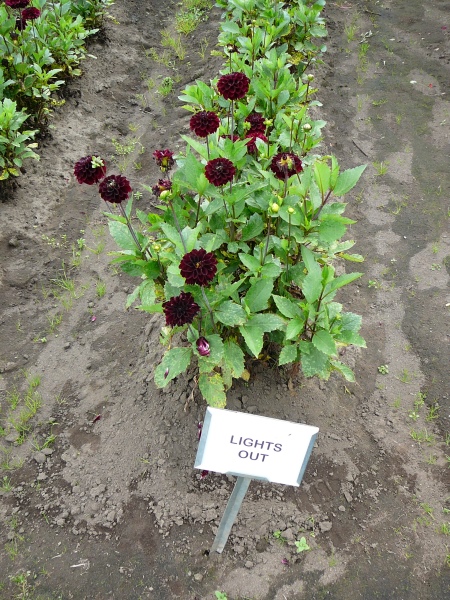 The deep deep red, almost black flowers of ‘Lights Out’ come on a quite low growing plant, which makes it easy to see the way the rows are hilled up. I have to stake dahlias, but here I noticed that even the heaviest blossoms had rarely drooped or broken off, and this after a heavy rain. I was told that they begin early and come back often to pile soil up against the growing stalks of the plants, eliminating the need for staking (on this scale, staking would be a monumental task). 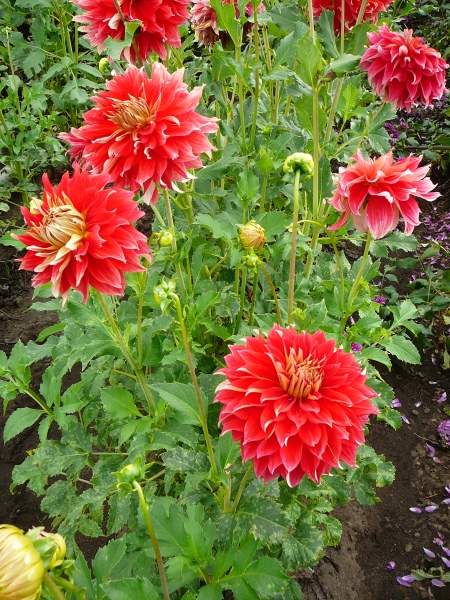 This is a family operation, and there are several namesakes, like this ‘Nick Sr’. 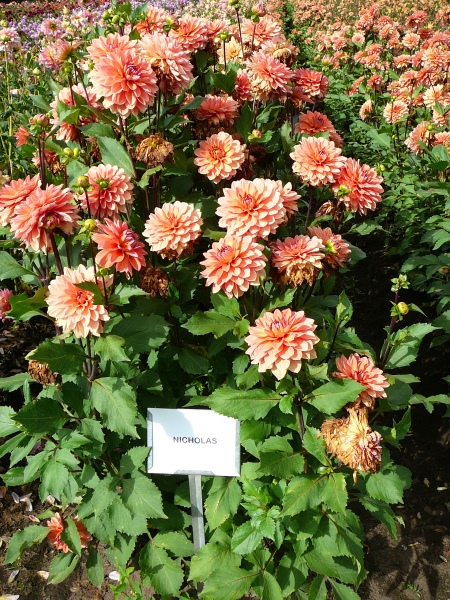 I’m assuming ‘Nicholas’ is one of Nick Sr’s progeny. 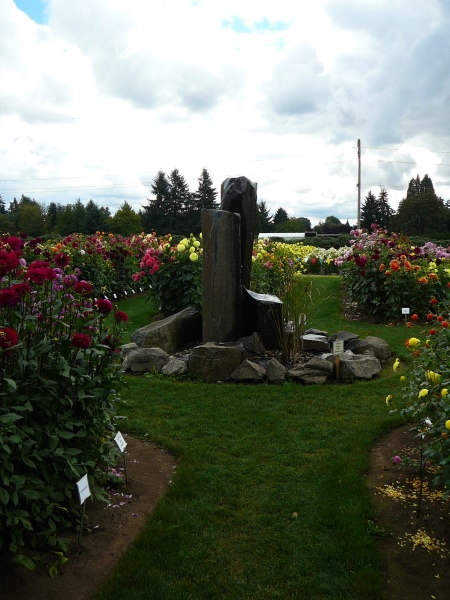 The love just keeps coming with this memorial fountain and pool for Nick Sr at an intersection of rows of his beloved dahlias. He must have been quite a guy. 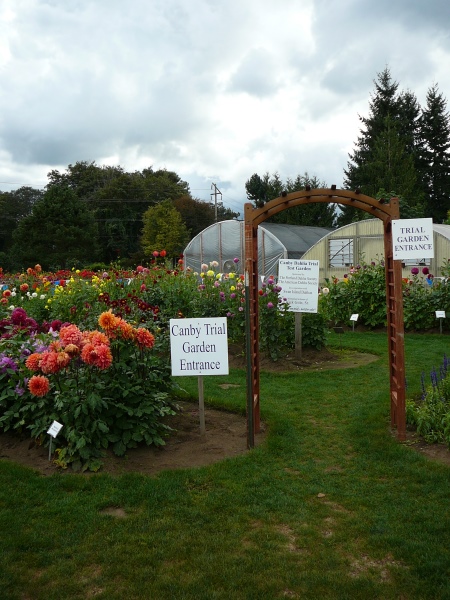 A section near the house is given over to trial gardens. The catalog indicates that a good number of the dahlias offered originated here. 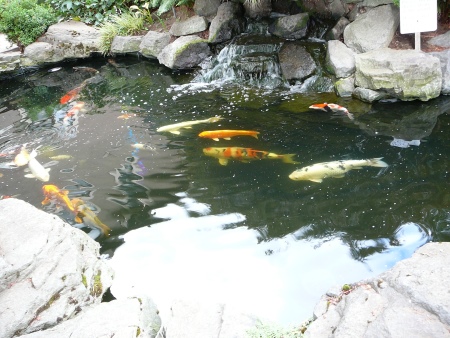 Even the fishes fit in with my color scheme. 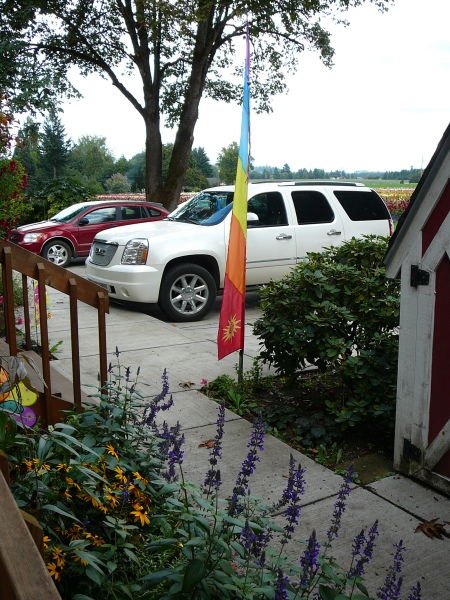 And lookee here…more banners! This is a good time to take a spin out to Swan Island Dahlias in Canby to see these flamboyant blooms in real life. Often people stash all of their dahlias in a single bed. I call this the fruit salad approach. It is gaudy and not terribly attractive, but if seen as simply a cutting garden it makes a certain amount of sense. At Heronswood, they tucked them into borders here and there with spectacular results, but then Heronswood operated on a different plane that most of us even aspire to. I resolve, here and now, to struggle in that direction with the intent of keeping the bouquets coming and the borders aglow from mid-July through first frost. I picked up a catalog and am making a list and checking it twice.

9 thoughts on “gardenpalooza and more”