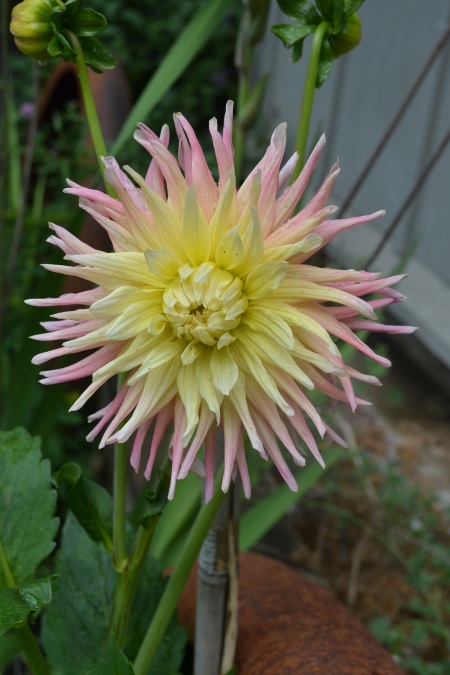 I have a sunny spot where I plant things that are meant to be strictly bouquet factories. It’s not big enough to be called a “cutting garden” but that’s the general idea. The Dahlia ‘Alfred Grille’ was purchased at a big box store and is much paler than the photo on the packaging. Good thing I was not planning it into a border. 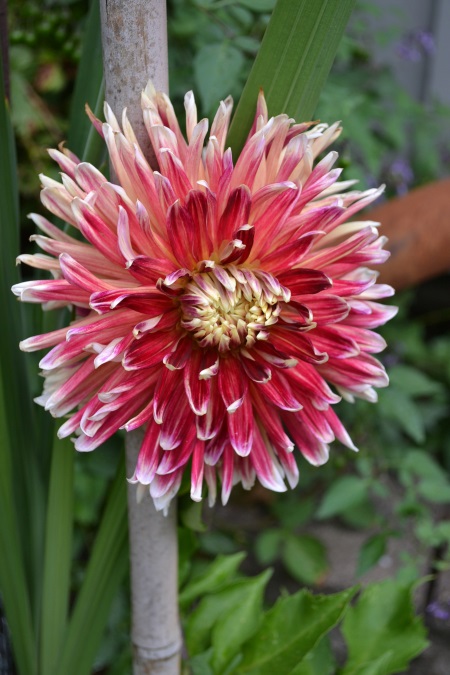 ‘Akita’, on the other hand, was in full flower when I got it from Jockey Hill at the Scappoose Farmers’ Market. It was bronze tones then, but has come back this year in these salmony shades. These guys seem to have a mind of their own. 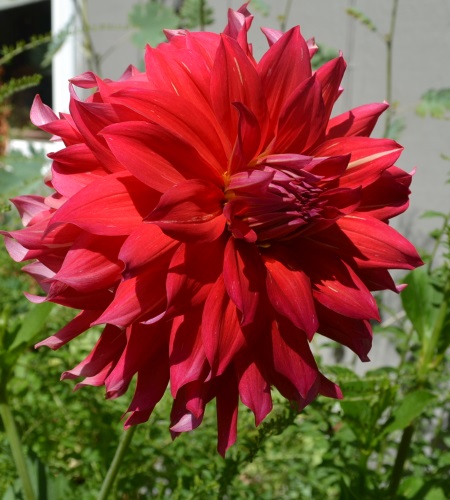 Speaking of which, this one disappeared for two or three years but came back this year with a vengeance. 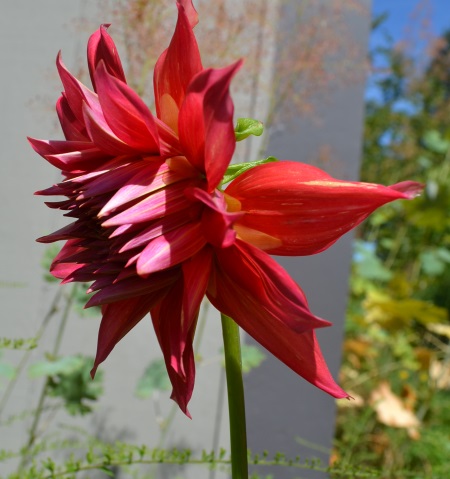 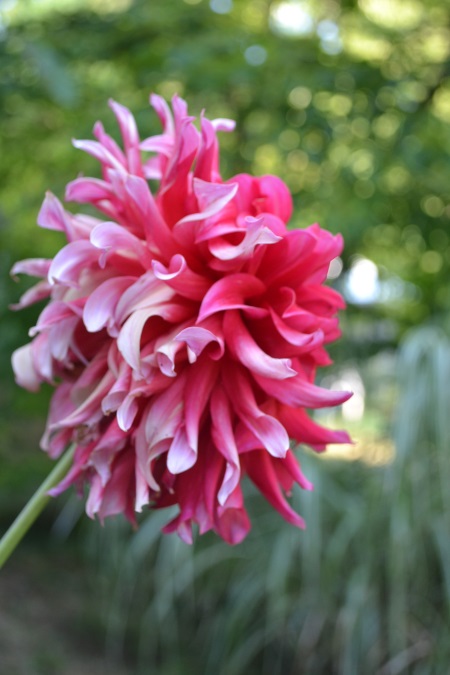 but grows increasingly frilly, as the first petals get paler and start to curve back toward the stem. It came to me with no name years ago and has followed me around since. I’m happy to see it back. 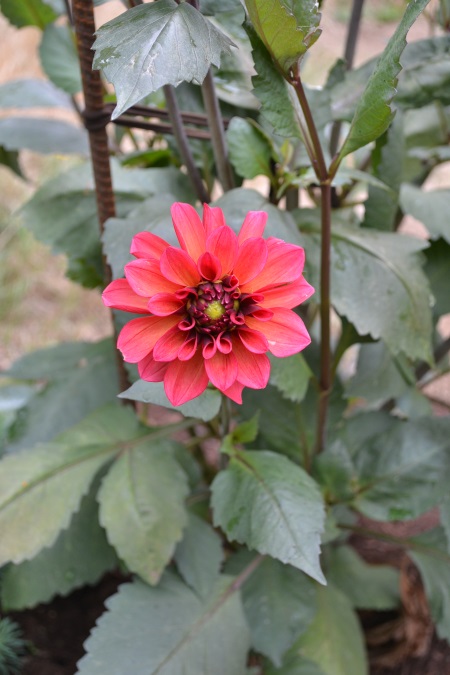 This one is called ‘Groovy’ and is the result of a visit to Swan Island Dahlias last year. I bought it for the dark leaves (not as dark as predicted) and the red flowers (not as red as predicted). 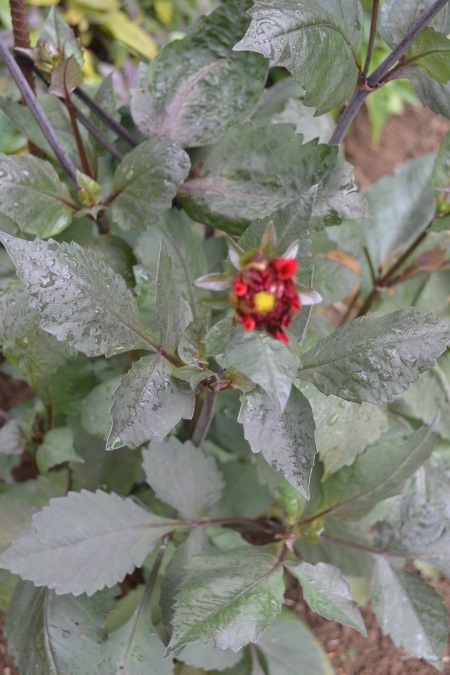 The flowers do start out red, but pale as they open. 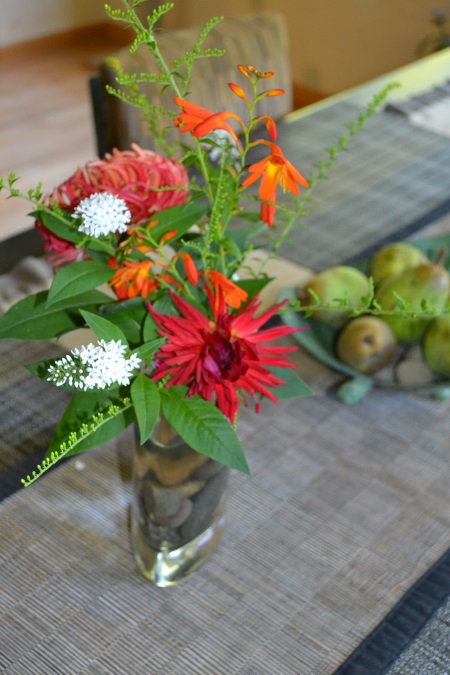 ‘Red Devil’, shown here in the center of the photo, develops in a nice, bright red with a spiky form. 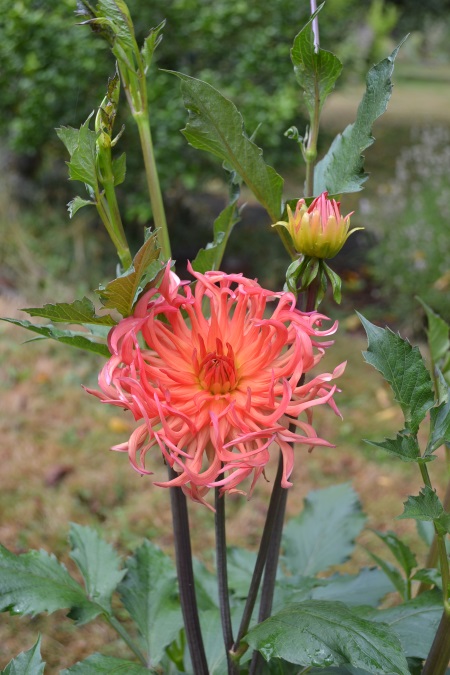 The prize for new acquisitions goes to ‘Bed Head’. The dark stems, the tousled petals, the shades of orange and the height (6′) make it a standout in my book. 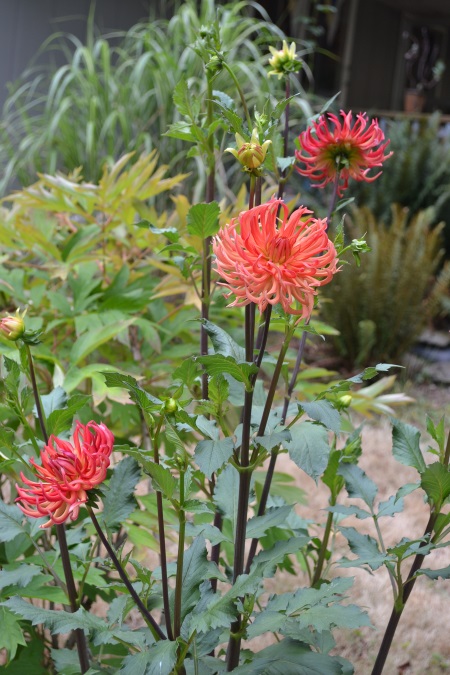 My aim, this year, was to work the new Dahlias into mixed plantings. The independent nature of these plants (coming up in unpredictable colors and forms from year to year, sometimes skipping a few years entirely) can make that a challenge. Here, with ‘Bed Head’, I seemed to be having some success. 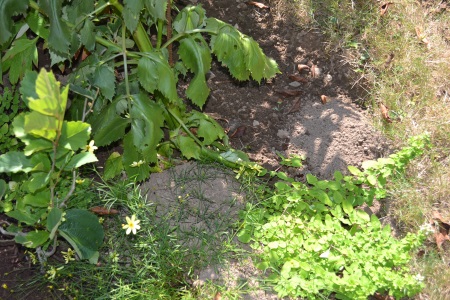 Then this happened. Yesterday I watered deeply, but when I went out this morning ‘Bed Head’ was leaning heavily to one side and looking all wilty. See those mounds to the front and side of the tilting stem with the droopy leaves? Evidence of gopher activity. We’re as eager as the next person to welcome wildlife into the garden, but these guys are inviting armed conflict. I’m going to drop some smushed castor beans down those holes and see if I can salvage my prized dahlia. In the meantime, here’s what I know about Dahlias from my own personal experience. I only dig every third year or so, at which point the mass of tubers looks something like a potato crop. I separate the clump, replant the healthiest looking tuber on the spot and give away or store the rest. I have had limited success with storing in crumpled newspapers or peat moss. The trick is to examine them every so often, discard any showing signs of rot or drying out and keep them slightly moist. In the off years, I cut off the stalks after a freeze blackens them and mulch deeply with leaves. I was surprised to have them come back this year after last winter’s deep freeze.

Every week, Loree features a plant in her garden that is her favorite (that week) and invites us to do the same. Her choice this week is elegant and subdued…just the opposite of my blowsy, extroverted Dahlias. Don’t miss out.

13 thoughts on “dahlias are my favorite plant(s) this week”