I am saying goodbye to the last of the lilies. 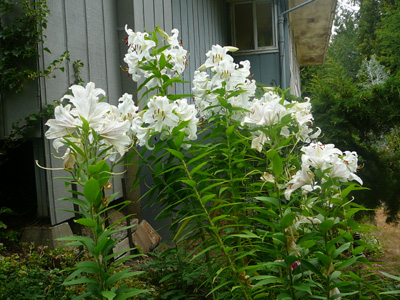 The first Oriental lilies that I planted were ‘Casa Blanca’..three bulbs planted in ’04.
They grew to about 5′ the first year. This year there there are nine of them, topping out at 7′. They begin blooming around the end of July and hang in there for about 3 weeks (maybe longer, depending on the weather). They generally like to have their feet in the shade and heads in the sun. This location on the south side of the house with dense underplanting seems to suit them. 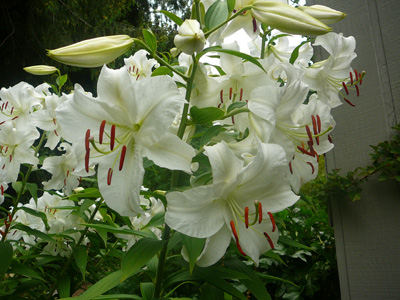 The scent is at its headiest in the evening. We get waves of it through our bedroom windows, even though the plants are a ways around the corner. 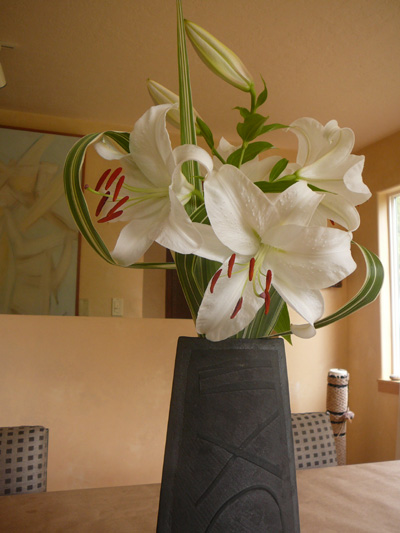 One stalk is enough to create a dramatic bouquet. When you buy them from a florist, the stamens have been amputated. I understand the reasoning, as they are drenched in pollen that can stain anything it touches. I find them much too beautiful a design element to sacrifice to the Gods of Cleanliness.

Working backward through the season, the ‘Stargazers’ bloom a week or two before ‘Casa Blanca’, and overlap slightly in bloom time. I planted 6 bulbs in ’05. They have proven much less vigorous, rising to only 3′ and decreasing in number (3 this year). I didn’t get photos of them, but we are all familiar with their vivid deep pink, freckled throats. 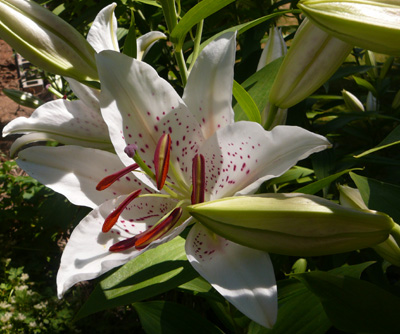 ‘Muscadet’ is the first of the Orientals to bloom. It falls somewhere between the other two in color (pale pink shading to white, with deep pink freckles) and height (5′). 5 bulbs planted in ’05 have increased to 8.

I am convinced that the time has come to divide the lily bulbs, refurbish beds and spread them around. Will let you know how that goes when it cools down and I can bear to dig. 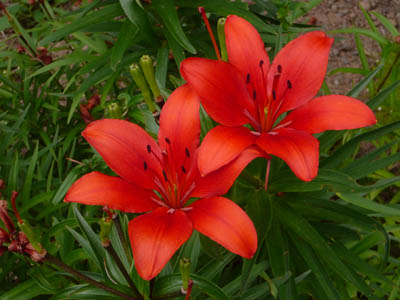 Way back in June, the lower-growing border lilies put in an appearance. What they lack in fragrance, they make up for in pure, saturated color. A friend brought me these (2, in a florists’ plastic pot) in ’06. 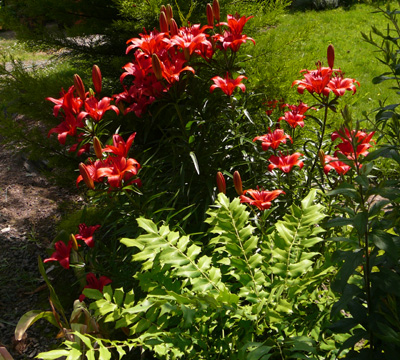 By this year they had multiplied to the point where they will become part of the big dig of fall ’09.