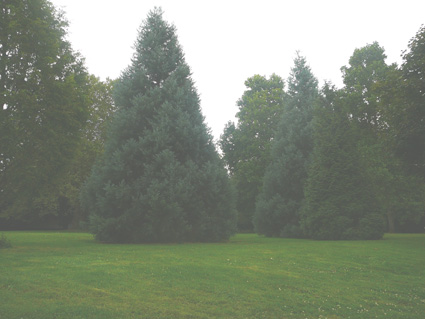 Whenever we go by Reed College, we admire the giant sequoias scattered around the campus. One of the nice things about having a good sized hunk of land is that we can indulge these fantasies with impunity. When we saw an ad in the paper (this was in ’06) offering 100 giant sequoia seedlings for $60.00 it was irresistible. We drove out to the nursery and picked up a big bag of little twigs, of which we were advised at least half would fail. OK…fifty would more than do. We dug a couple of long trenches and heeled them in. A year later, probably about 70 of them had survived and were ready to be potted up in 1 gal pots. In ’08 they moved into even roomier quarters and still our fail-rate was ahead of the curve. 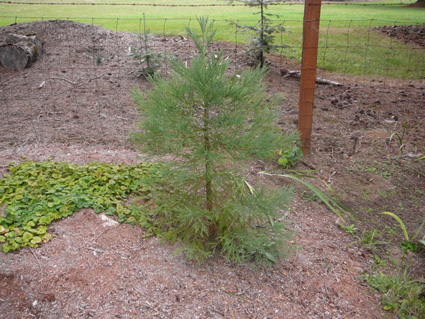 In the spring of ’09, Richard planted most of them in the ground. We gave a few away to friends and still have five or six in pots. They grow 2-3′ a year, so we will probably live to see them reach the size of the teenagers seen in the first photo…but not the mature height of 325′ with up to 30′ trunk diameter. In a couple more years they should begin to assume their fluffy blue-green coloration and perfectly conical shape. 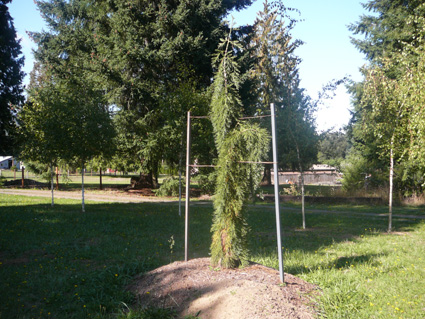 R splurged on a Sequoiadendron giganteum ‘Pendulum’ this summer. You can see how parts of it are beginning to droop. It must be staked early on to maintain a generally erect habit. The quest for one of these began with a visit to the Oregon Garden, where the evergreen section features a circle of huge stones and weeping cedars. The overall effect is of a confab of druids. We’ll be looking for some of those cedars next. 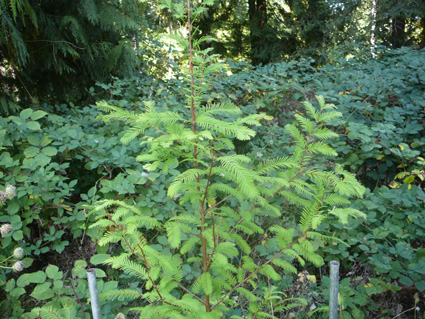 The Dawn Redwood Metasequoia glyptostroboides is deciduous, and another fast grower. Yep, them’s blackberries in the background. After doing battle with them for several years, our latest scheme is to crowd them out. 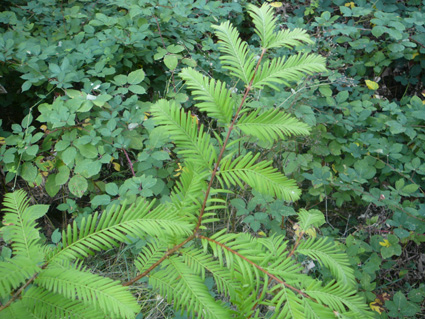 A close-up gives you some idea about the silky, fresh look of the needles, which will soon bronze up and then fall.

4 thoughts on “stuck on sequoias”