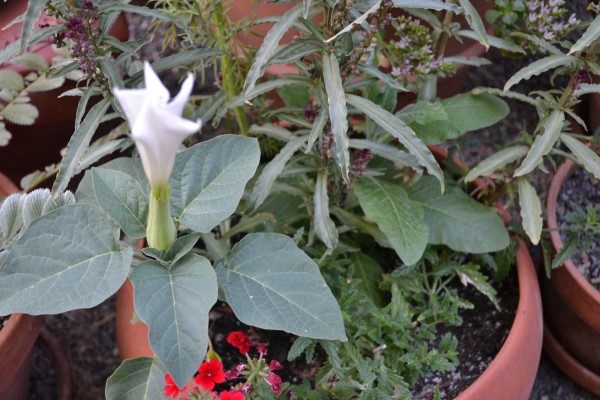 Still enjoying the results from seeds generously provided by Botanical Interests at the Portland Fling. I sowed Datura seed in several pots. Each bloom is short-lived, starting out like this early in the day. 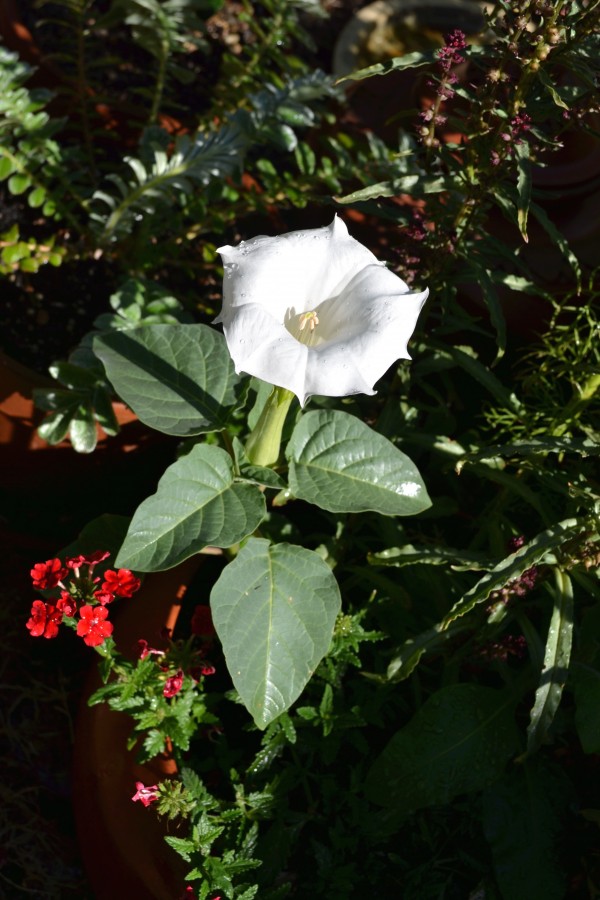 By early afternoon, it will have fully opened. Pam (Digging) has some mysterious evening shots you won’t want to miss. She mentions the scent, which I failed to notice. The next blossom to open is definitely getting the sniff test. 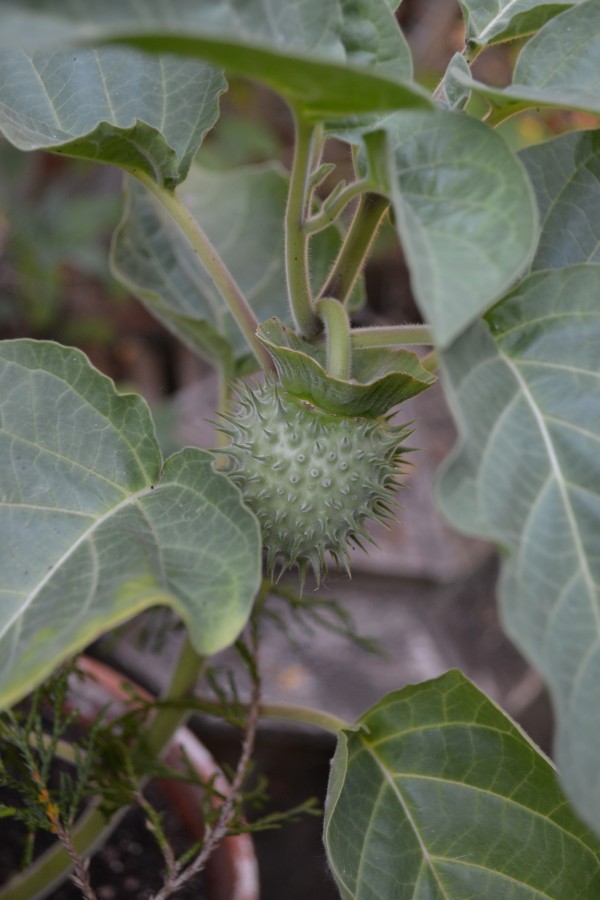 The seed pods are nearly as interesting as the flowers. I am allowing them to go to seed. They are very easy to grow from seed, and I will obviously have enough to share. If you want some, just let me know. 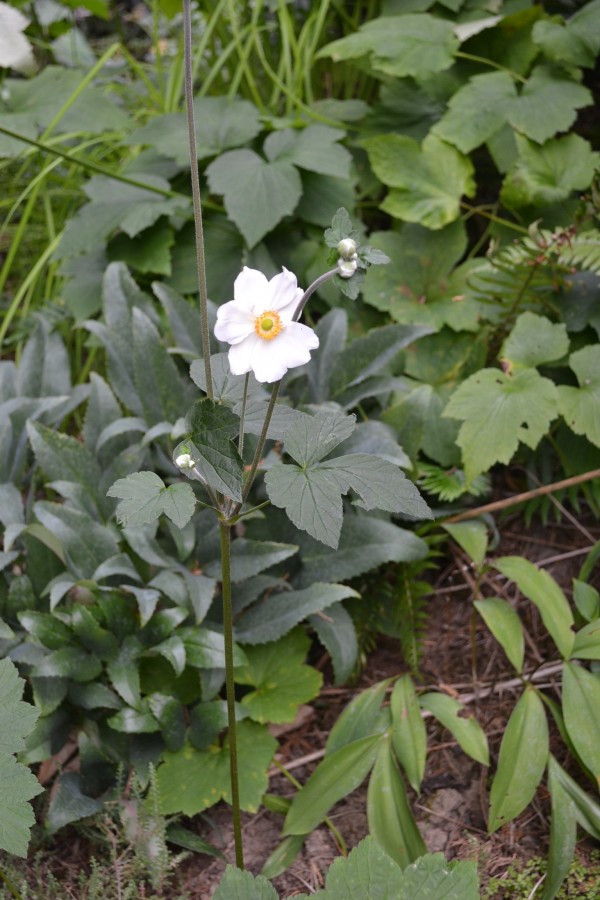 I look forward all year to the late appearance of Anemone ‘Honorine de Jobert’. 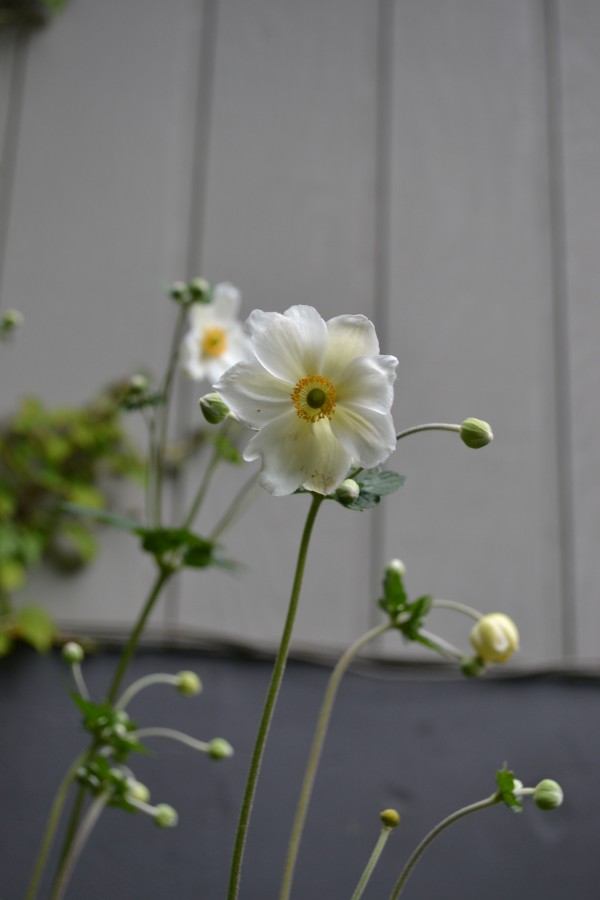 She towers regally above her shady companions and the buds (little balls) are as interesting as the full blown flowers. 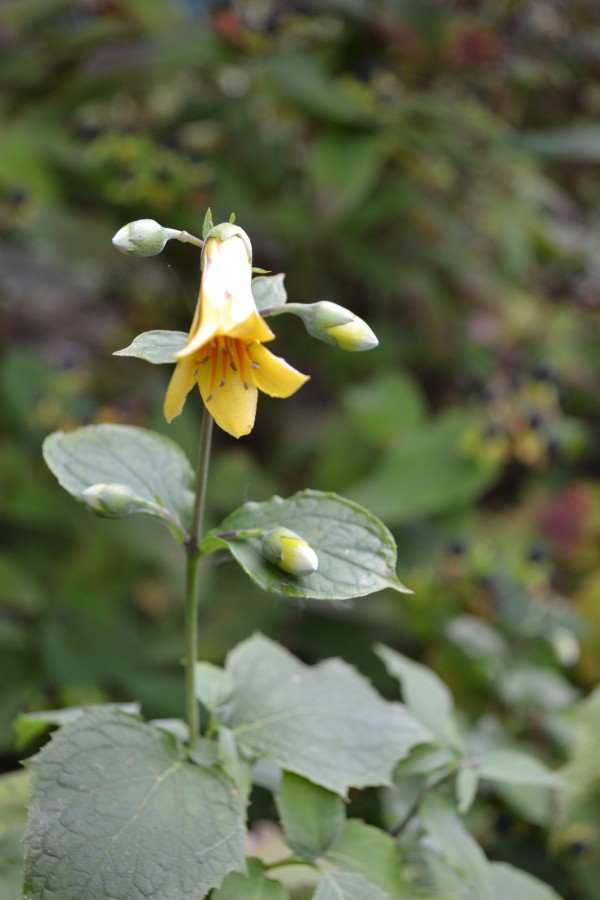 New to me this year is Kirengeshoma palmata. Some things are well worth the hunt. 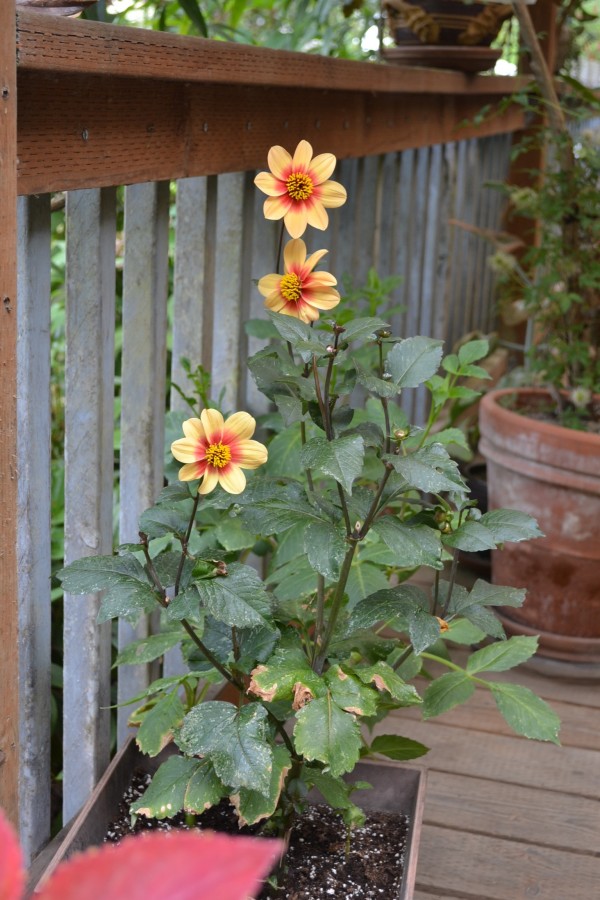 Because I lost Dahlias to gophers last year, I put new ones in pots. They are less showy than they would be in a border, but you do what you have to do. 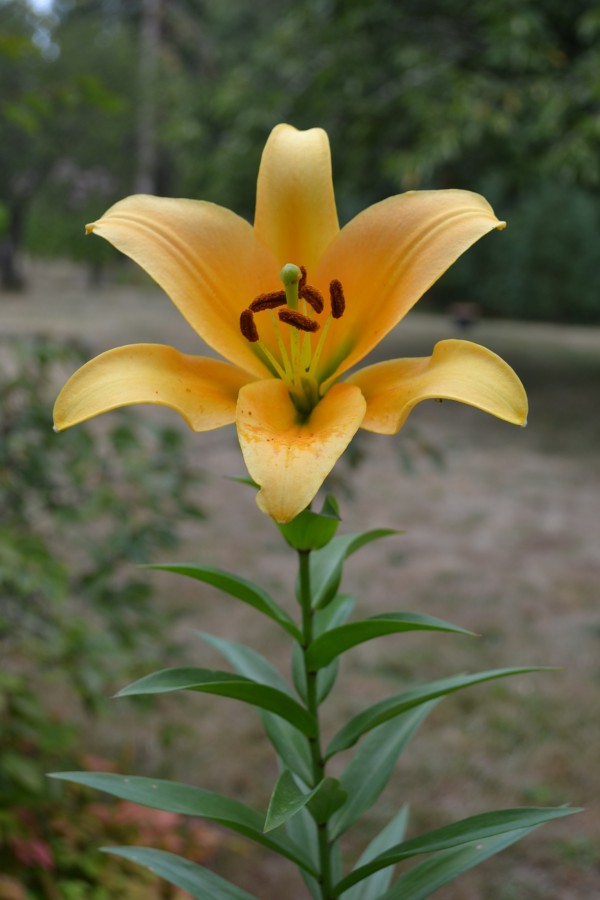 Same story with the lilies. I was so impressed with the lilies at the Portland Fling that I just HAD to have some. Out of several that I planted, this was the only one to produce a flower, and it was not the deep, rich orange I was after…one of the dangers of growing from bulbs or seed. 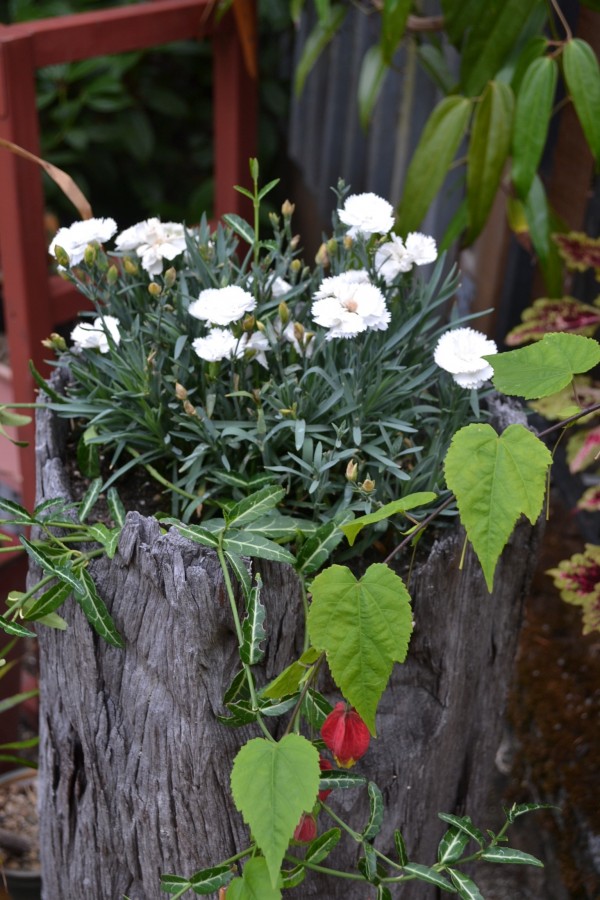 One of the truly xeric plants is Dianthus, so I’ve been adding them here and there in the hope that they will survive no matter what the weather gods throw at us. The thing is, they have a heavenly scent…so I put a few of them in this planter near the front steps to seduce visitors (and me) with their clove-like aroma. 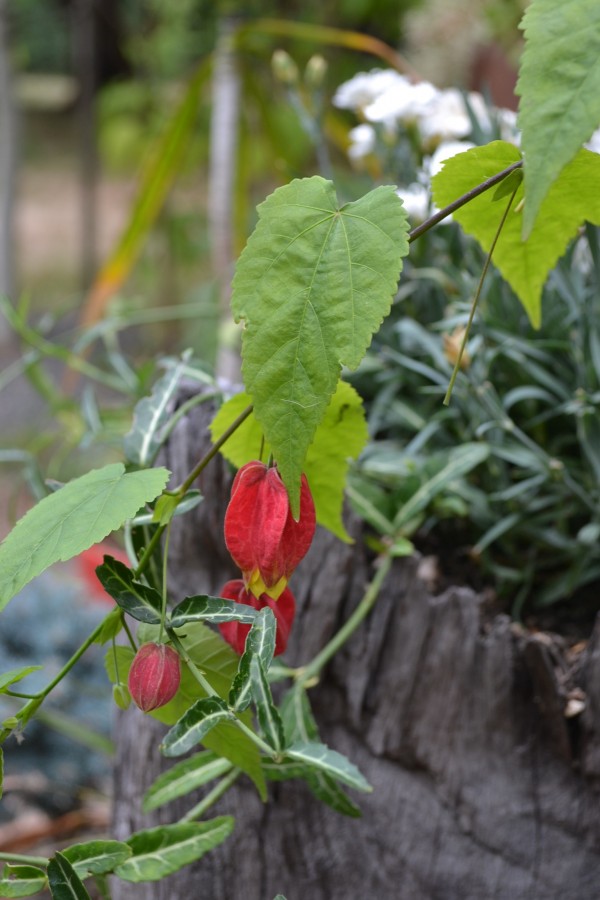 Nearby is an Abutilon megapotamicum that has vining tendencies, unlike the more upright versions. 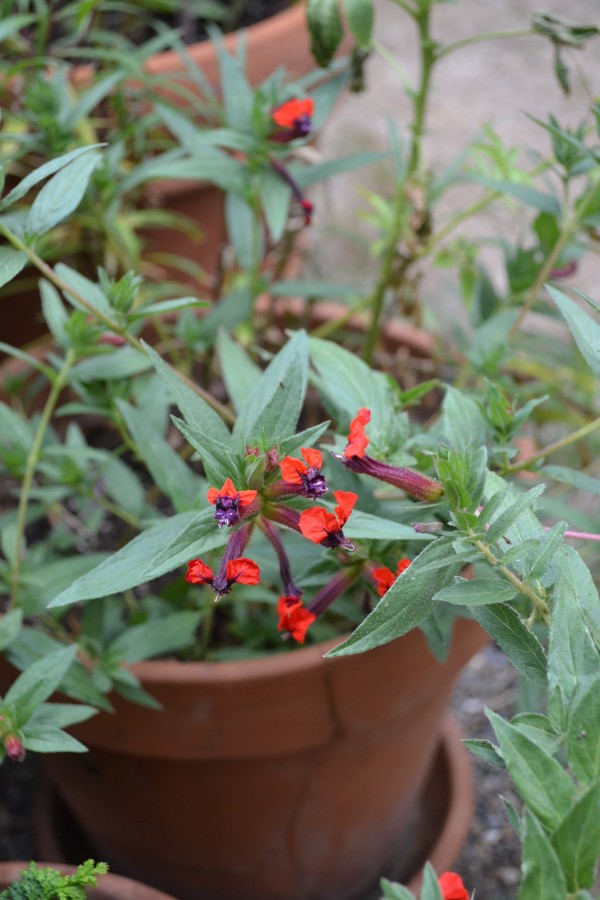 How cute is this? Bat-faced cuphea.

You can see by the sunburned foliage in the background that the Crocosmia have not fared so well in this hotter than usual summer, but ‘Emily McKenzie is blooming after skipping last year…so what are we to make of that? 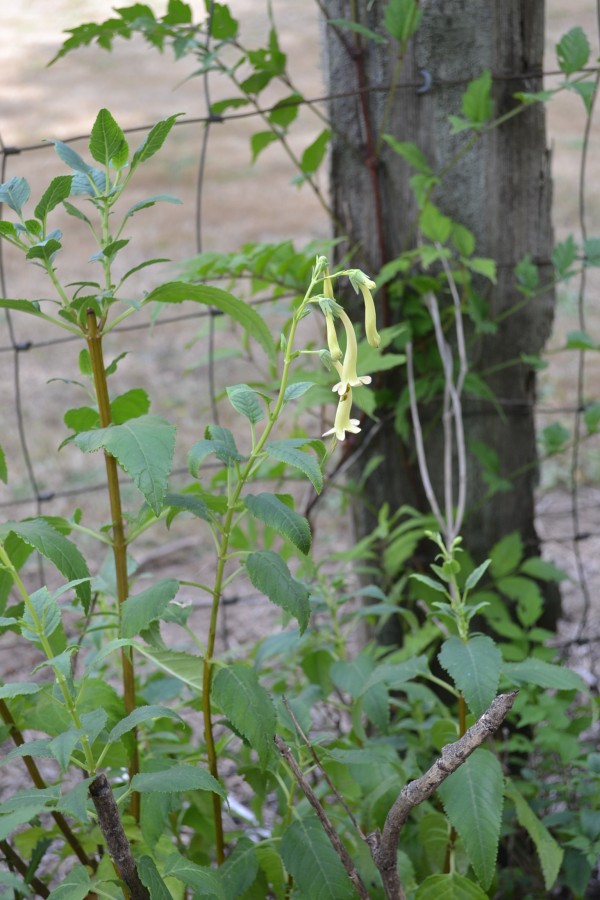 How subtle is this? Phygelius ‘Moonraker’ is one of those quiet presences so easy to overlook. 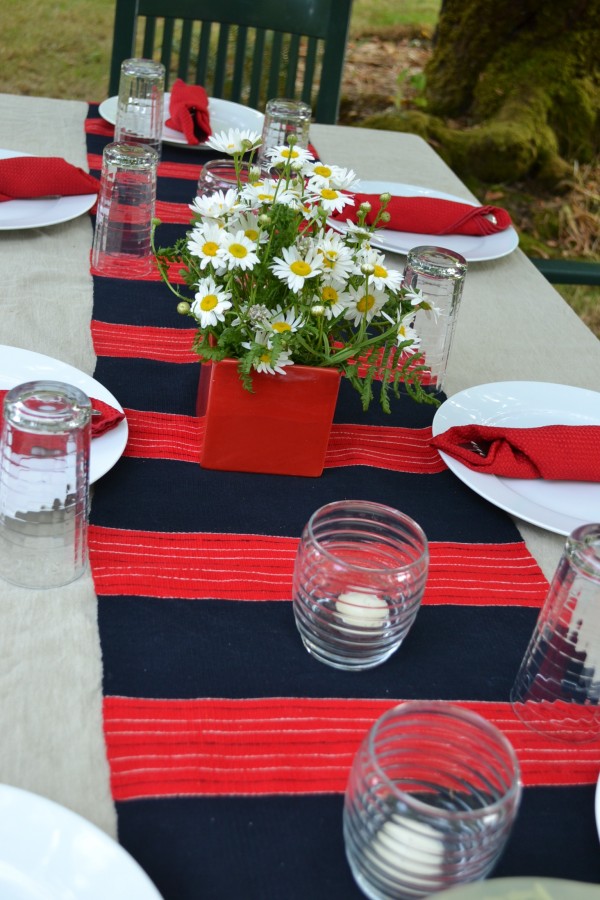 Now let’s look at a posy of field daisies that makes a nice centerpiece for a luncheon out under the trees. 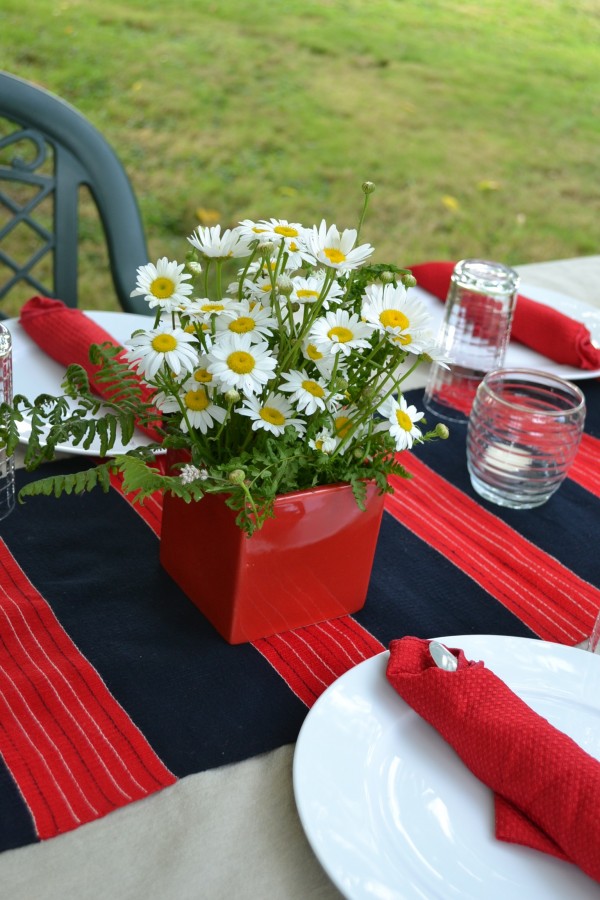 They won’t last long, but placed into the square red vases, they make a statement about nature’s contribution to a luncheon “en Pleine air”.

This is what happens when writing a post after a long day and a couple of glasses of wine. I forgot to add links to Carol (May Dreams Gardens) for Bloom Day and Cathy (Rambling in the Garden) for In a Vase on Monday.

28 thoughts on “belated bloom day ending in a vase”