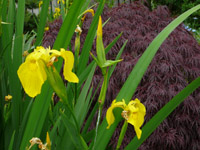 Just like the female star in an old Robert Mitchum movie, the flower you see here may be lovely to look at, but oh, so dangerous to love. I’m not even sure where it came from…probably a division from a friend who thought she was doing me a favor… as indeed she was, because I was ever so happy to get it. You can easily see why. In fact, this is one of the few specimens that mere acquaintances would beg me to pass on to them. It likes wet feet, so the first several years it was well-behaved (as in not all that happy). As soon as the watering system went in, it’s demeanor changed radically. Before I really cottoned on to its wily ways, it had commandeered every open space and was elbowing its way into Melianthus major‘s territory.

Still, who was I to complain? The spiky foliage created exciting exclamation points throughout the landscape. Then Amy visited, and we took a little tour through the garden. “You do know,” said she, in her tactful way, “that those are on the noxious weed list, because they are choking out native species in boggy areas and near streams.” Funny how a little knowledge peels the scales from one’s eyes. I suddenly saw how these heretofore cherished iris were threatening to overtake the burgundy Japanese maple in the background of the above picture. My first battle was with that clump…I broke two sturdy shovels before Richard came to the rescue with a crowbar and a sledgehammer.

Through the following late spring and summer, I patrolled the remaining clumps and whacked off any stalks with seed heads that were spotted. Any such mission is destined to fail, just because there will always be the odd pod that escapes scrutiny, to spew its progeny far and wide. The new intruders were not that difficult to pluck from the ground, but their ancestors were another story. Out came the crowbar and sledgehammer, and the chain gang got to work. The root systems of these mature clumps had become one with the earth. We soon (well, not that soon, had a mountain of debris. We determined that, should we haul it to the dump, we would probably need to take out a second mortgage to pay the freight. It wound up under a tarp of unsightly black plastic, where we hope it will decompose into something resembling harmless compost.

As fall closes in, thoughts turn to replacements that can take over the sentinal-like, upright, spiky presence vacated by the iris. I’m thinking maybe phormium. By all means, if you have inside information that casts ominous shadows over my new choice, please…please email me immediately and set me straight.