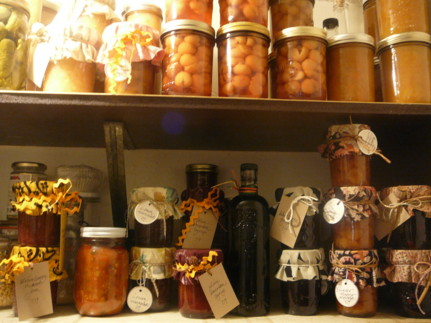 The larder is nearly full. Those pickles in the upper left corner of the shot are from a friend. A few jars of lemon marmalade are from back when Meyer lemons were in the markets. Everything else came from our yard, or surrounding wild areas (the blackberry jam and syrup). The syrup was meant to be jam, but it never really jelled. The next batch, I added some apples (high in pectin) and it not only jelled too much, but the apples diluted that wonderful wild blackberry flavor. I hate to use packaged pectin because of all the sugar required, so I’ve been reading around. Irma R. in Joy of Cooking says that cooking time makes all the difference, so more experiments with our endless supply of blackberries next year. In the meantime we will endure runny syrup oozing through the holes in our toast and dripping down our chins. For the record: my blackberry pies turned out perfect. 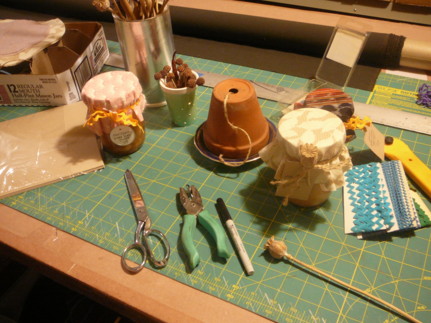 The cutting table became a workshop for a day, as apple/pear sauce with ginger and various preserves got dressed up for the holidays. Forgive me if stating the obvious insults your intelligence, but some of the little tricks took me several seasons to figure out, so I’ll pass them on, just in case. That overturned clay flower pot has a ball of twine inside, with one end coming out through the hole. Makes it oh so easy to pull off the desired length without chasing the ball around the room. If you don’t sew, you may not have scraps of cloth laying around. Most quilting shops or fabric stores have bins of roll ends for sale. I like using a different fabric/twine/label combination for each flavor. When positioning the circle of cloth over the top of the jar, it is difficult to get it centered and gathered evenly, unless you start with a rubber band, make those adjustments, then tie off with decorative twine of choice. I use raffia, garden twine, rikrak, kitchen twine or whatever, and often tie in a dried pod or some other tidbit from the garden along with an identifying tag. It is surprising how many possibilities for tags present themselves in an office supply store…or even that section of a one-stop shopping center.

I’m not too crazy about spending a beautiful day (like when the cherries demand attention) indoors cooking, but now that the rains are here, and Richard is glued to the Duck (University of Oregon) games on Saturdays…what could be better than good music on the stereo (R always makes sure there are speakers in the kitchen, sly devil that he is) and a pot of applesauce burbling away on the stove, scenting the house with its cinnamon-y goodness. Whenever I hear whooping and hollering from the TV room I can get there in time to watch the replay.