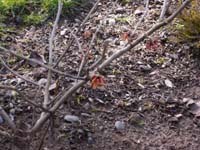 This would have been easy to miss, had I not been searching for it. Do you see the raggedy little splash of orange in about the middle of the picture? Actually, there are several others, but the blossom in focus is the easiest to spot against the background of mulch. It is Hamamelis intermedia ‘Diane’, and I have high hopes for it (as yet unfulfilled, but then it is just a baby). It is billed as a fiery-leaved standout in the fall garden, and these small flowers are supposed to be a treat to the nose. When I get that close to the ground, all I can smell is dirt. 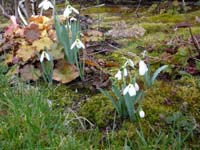 The snowdrops have been around since January, but when they were peeking through the snow they seemed beleaguered. As soon as the snow melted, they perked right up and looked ready for their close-up. Unlike the big, blowsy blossoms of high summer, all of the early performers reward close attention. See how they nestle up to the Heuchera ‘Caramel’?…or is it ‘Amber Waves’? They look similar this early in the year, when they are struggling to maintain composure in the face of unpredictable weather. 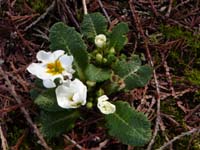 Every year the primroses show up at the supermarket right after Christmas decorations come down and everything looks drab. I can never resist a few for the porch, and have found that if I tuck them into the woodland, they come back year after year. The white ones seem to be the hardiest, and show up best against the duff and moss. These, too, have been blooming since January, but who goes out there to appreciate them until about now? 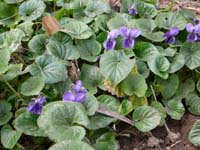 I see why violets are often referred to as “shy” since they barely peek out above the carpet of leaves. Demure they may be, but the irrepressibly bold scent will draw your attention. I like to pick a few each day to perfume the air. They won’t last long, and you must find a tiny vase, but as few as 5 can fill a room without overwhelming it the way paperwhites will. I let these run rampant wherever they are happy. They form a dense, evergreen mat that is very effective at blocking weeds. Be forewarned, though, as many gardeners consider them invasive.

One thought on “a bloomin good time”

Leave a Reply to 9000 Cancel reply