Learning to live with, and even appreciate, the thuggish plants in the garden is sometimes merely a matter of shifting focus. Let me illustrate by telling you a little story about an unassuming, shy plant that surreptitiously overran the garden and then seduced the gardener.

Moving into a different house, most will agree, can be a daunting task. More so, if the house is a remodeling project in a borderline area (it would be a stretch to call it a “neighborhood”, surrounded as it was by warehouses and freeways). In my first act of gardening, I brought home a shovelful of common violets (Viola odorata) from my mom’s and slipped them into an unobtrusive spot by the front porch. Truth be known, all spots were pretty unobtrusive at the time, but that’s another story. My intent was fuzzy, just some knee-jerk reaction to a nesting instinct. My ignorance was vast. I had never heard of such a thing as an invasive plant. Over time, more and more of the rubble-strewn lot gave way to cultivation. At weeding time, I would find errant violets popping up in each and every bed, duly yanking them out and casting them aside with some annoyance. The violets had other ideas. In late February, I ventured into the waterlogged garden to admire the daffodils at close range. Confronted by a carpet of fragrant purple, punctuated here and there by the nodding yellow and white blossoms of the daffys, it became clear that the violets had it right after all. 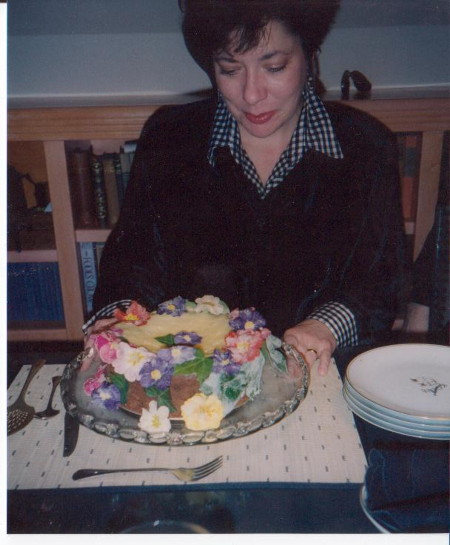 Then I remembered a failed baking project from some years back. It was a birthday cake. It fell. There was no time to bake another, but this sorry-looking brown lump with the crater in the middle simply would not do. Filling the crater with lemon curd helped some, but embellishment of some kind was definitely in order. Off I went to the gourmet deli for some candied violets. Yikes! Semi-precious gems fall roughly into the same price range! I would have to make do with a few primroses dusted with sugar and some sprigs of ivy. The cake was lovely in the end. 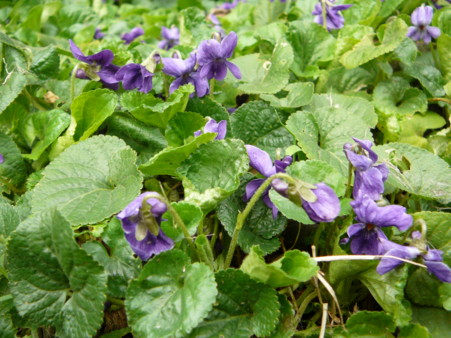 The yen for candied violets resurfaced with vigor when I saw before me the raw materials in ridiculous abundance. After some trial and error, here is the process I devised. Pick about 2 cups of violets with stems attached. Fill a large bowl with cold water. Dump in the violets and swish them around to eliminate mud and/or critters, then pat them dry with paper towels. Whisk two egg whites in a bowl until barely frothy. Mound granulated sugar in a pie pan. Cover a cookie sheet with parchment or wax paper. Have handy a teaspoon, a pair of scissors and a damp sponge. Hold a violet by its stem, swish it around in the egg white, tap it against the side of the bowl to remove excess, then lay it in the sugar and use the spoon to fill all of the little crevices. Shake off extra sugar, lay the sugarcoated violet onto the parchment and use the scissors to cut off the stem. The sugar will puddle a little, so the best effect will be achieved if you place the flower face up. The damp sponge comes in handy to wipe sticky fingers and scissors from time to time. My two cups of violets filled a large baking sheet with no two violets touching. Drying time, I found, is critical. In a few hours they are dry enough to use for decorating, but for storage, a few days is more like it. My first batch seemed perfectly dry the next day, so I put them in little jars on a shelf, where I could admire them. Oops! They congealed into a solid ball. It was possible to pry them apart, but not without causing considerable damage (broken bits make a lovely flavoring for homemade ice cream, scones or biscotti). I used superfine sugar for the second batch. The color comes through a little better and they are more delicate, but drying time is even longer.

In the end, what is there to show for the considerable effort? The deep purple of the flower is filtered through the sugary, translucent crust to become a pale, shimmering lilac with just a glimpse of the orange eye showing through. The taste is hauntingly unexpected and elusive: as if your senses got all mixed up and you are suddenly tasting with your olfactory glands.

This is no quickie project. My love discovered me amidst the violets and proclaimed me certifiably insane. Unable to argue with such an astute assessment of my mental state, I simply turned the music up a notch and continued dipping and snipping and dreaming of extraordinary concoctions to come.

6 thoughts on “lemonade from lemons…so to speak”