Every Sunday at one pm, the folks at Joy Creek put on an educational seminar. They always sound interesting, but tearing oneself away from gardening at home on a Sunday afternoon is a big order. Last Sunday, the subject was pruning. That got our attention. We have a running controversy around here. On one side is the liberal lopper, on the other, one dedicated to chaos theory (that would be me, as if you hadn’t guessed). I figured if I could drag Richard to this seminar, I would get some help in taming the rampaging beast. I figured wrong. 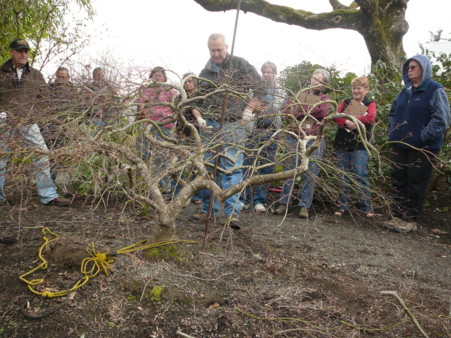 After a short introduction, during which it was impressed upon us the importance of caring for our tools (I was already behind the eight ball with that one, how about you?), we decamped to a Japanese maple. It looked quite beautiful to me…kind of an umbrella effect with a complete lacework canopy of branchlets. The picture above was taken about two thirds of the way through the process. It was brutal. It was, however, highly informative, as we were taken through the complete process, with our guide thinking out loud and conveying his strategy for each and every cut. First, he cut out all the dead wood. With that out of the way, it became easier to see the structure. Where branches rubbed against one another, decisions had to be made: which one would go? Sometimes the choice was surprising, until we learned of how it fit into the overall vision for the tree. In the end, the volume was taken back by about half. I began to see it less as butchery and more as a slow and careful artistic endeavor: the sculptor revealing the essence of the artwork. This particular tree is valued at around $3000.00 (insert Antiques Roadshow-ish gasp of disbelief here) 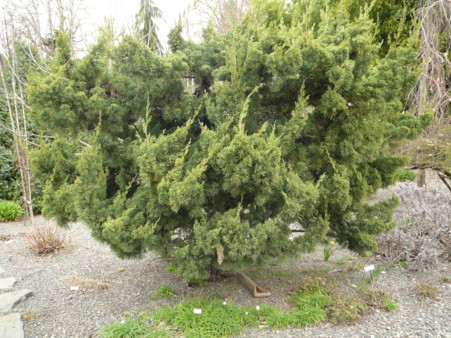 We had spent nearly an hour on the maple, so the rest of the session consisted of a walk around the grounds with questions and answers. A memorable stop along the route was this juniper, left to its own devices. 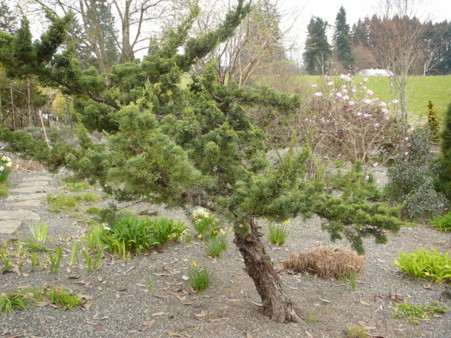 And its once identical twin after a haircut. The tonsured twin is less likely to lose limbs in extreme weather, and clean cuts have replaced any damaged areas where disease would be likely to gain a foothold. This guy has a windswept, coastal persona that is appealing, but I am still partial to his shaggier sibling (just a matter of taste: Jeff Bridges over Alec Baldwin any time).

I guess there will still be the push-pull of different perspectives in our garden. I may have lost all credibility in my quest for the “natural” look, but I can hardly complain. Most of our property is untouched deep woods. Tomorrow I will take you on another walk on the wild side.