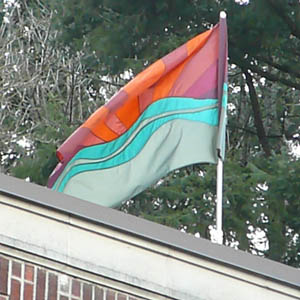 The Linnton Condominiums had flag poles across the roof line, left over from the days when it was a schoolhouse. When Ellie bought two Spinnakers from me to put in her front planter, she feared that the condo association would ask her to remove them for the sake of consistency. Instead, they decided to utilize the abandoned flag poles to express themselves in some way. There are pirate flags, Canadian flags…you name it. Ellie and Brad decided to commission me to design theirs. The fine old building looks out over the river toward the sunrise, and I know Ellie is fond of Color with a capital C, so I took that as my theme. Here it is, caught in motion, and below is a shot I took of it tacked up on my deck to show the full design. 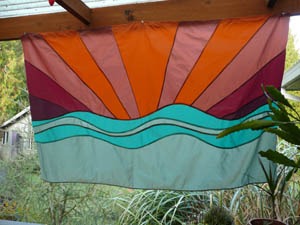 One thought on “custom flag flying”