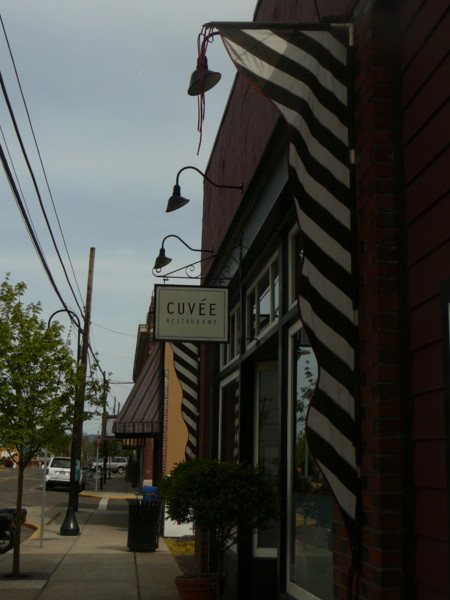 Around the same time we left downtown Portland for our bit of ground on the outskirts, our good friends Susan and Gilbert made an even greater leap of faith. They moved to Carlton, OR, in the heart of wine country, where Gilbert opened Cuvee, a restaurant where he can ply his considerable skills as a French chef (yes, those are banners by Ricki bracketing the facade).

Susan, meanwhile, as soon as she recovered from the shock of rural life, located, and bonded with, every creative person in the vicinity. One of these artist friends has a birthday in late April. She and Susan put their heads together and devised an annual event, a Birthday Party built around a theme (different each year) requiring costumes, elaborate invitations, favors, awards…these babes pull out all the stops. This year we were to come as our 9-year-old selves. The invitations arrived in envelopes apparently addressed in a fourth grader’s best block printing. Inside was a lined sheet torn from a spiral notebook with a class photo and all the pertinent info. 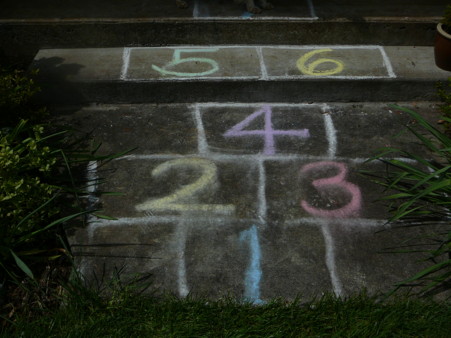 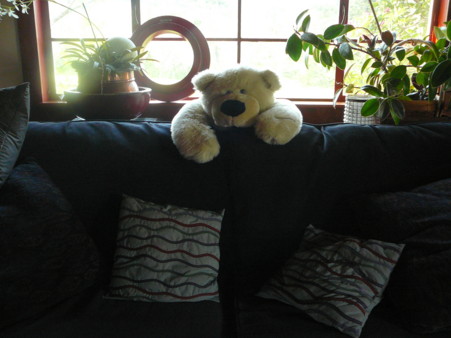 Kid-pleasing vignettes met the eye in every direction. I was so taken with the bear that I failed to notice my pillows on the couch until I looked at the shot later. 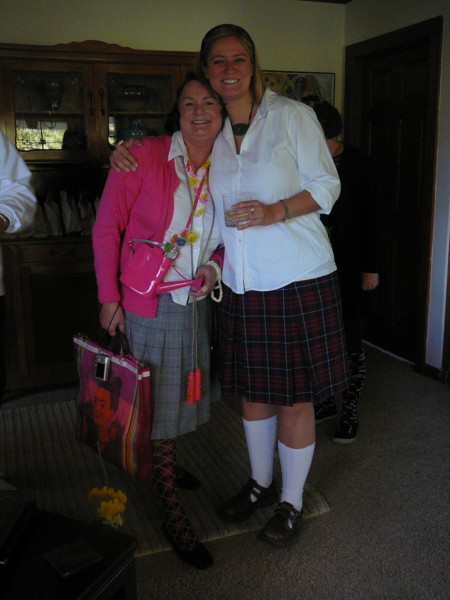 Here’s our birthday girl, Lorrie, leaning into little (it’s a state of mind) Ashley. There must have been 25 to 30 women, ranging in age from 20’s to 80’s, and all blending into a harmonious whole…if you can imagine such a thing. 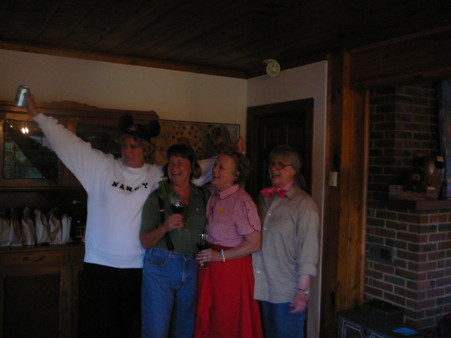 Mousketeer Nancy was adept with hula hoop and yoyo, performing with great dash and confidence some tricks I had never seen before. Annie in pigtails had just “fallen out of a tree”, and broken branches were sticking out of her tomboy duds every which way. Evonne came as the 9-year-old she always wanted to be, right down to the ankle strap shoes she didn’t get the first time around. That’s me on the right. Something about pulling hair into two pony tails, one on each side of the head, makes me feel like a kid again. 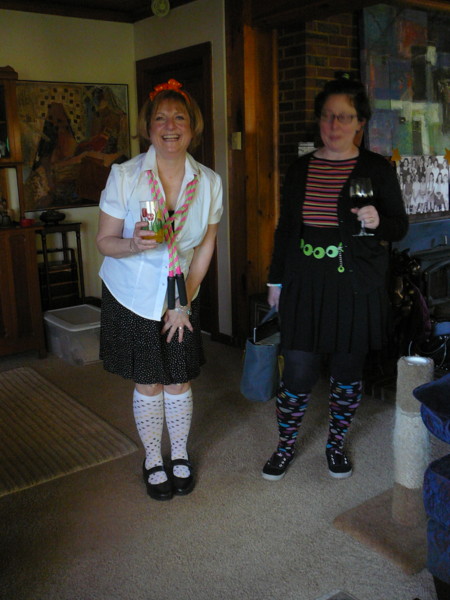 Footwear played a big part in our regressions. Marilyn’s white knee sox show off her Mary Janes, while Ellie’s zany patterned version hints that her mastery of combining colors and patterns started early. 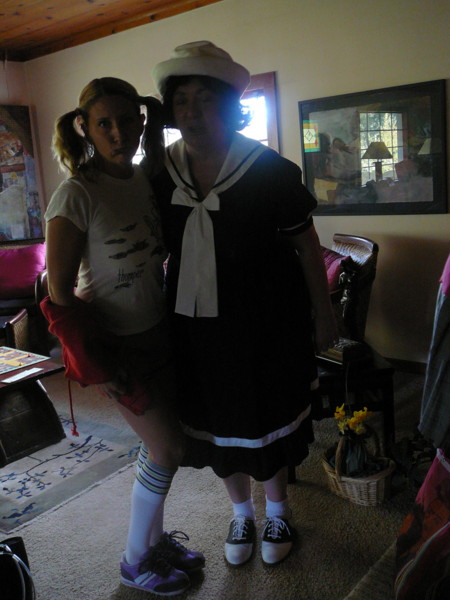 Tracy threw herself into her role by ramping up her already high energy level to that of a hyper kid on a sugar high. With her is our co-hostess, Susan, who always could pull a look together. 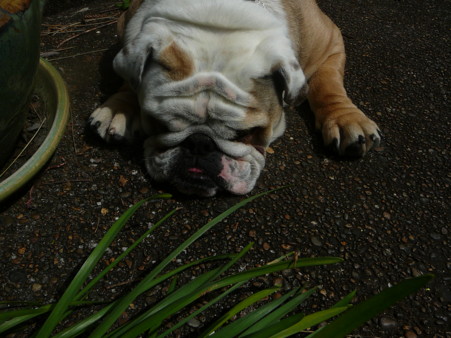 Hank, at one year old, must have gotten his directions turned around. He arrived looking much older than his year. 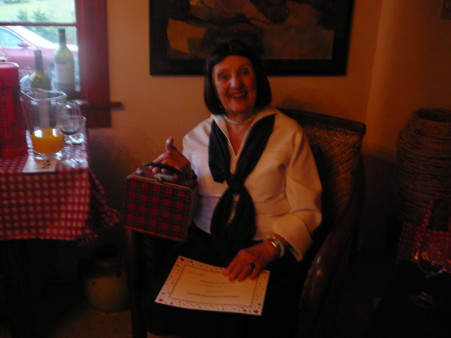 Here’s Elna, showing off her certificate for “student of the year” and her lunch box prize filled with twinkies, bubble gum Crackerjacks, etc. You can see the refreshment bar to the side, well stocked with KoolAid, Tang…oh joy! 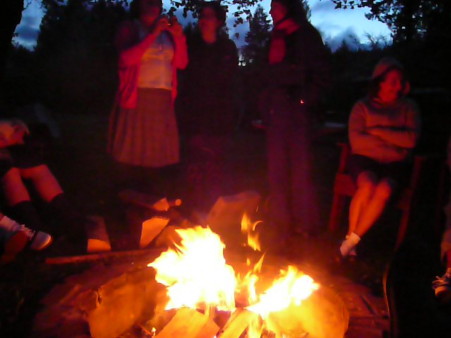 Having feasted on delicacies like grilled cheese, pbj, mac ‘n cheese, jello molds and the like, a fire drill booted us out to the fire pit for some singing and storytelling and visiting. 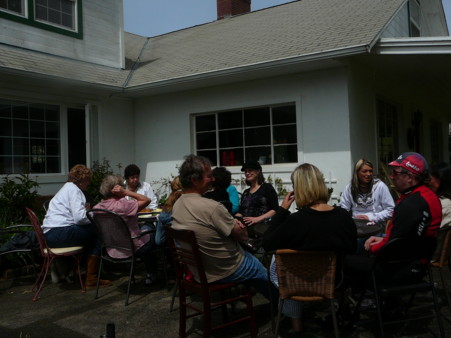 Everyone had come a considerable distance on winding country roads (plus that Tang was laced with a little something) so of course it was a sleepover. We had developed grown-up tastes overnight and brunch on the terrace was magnificent. 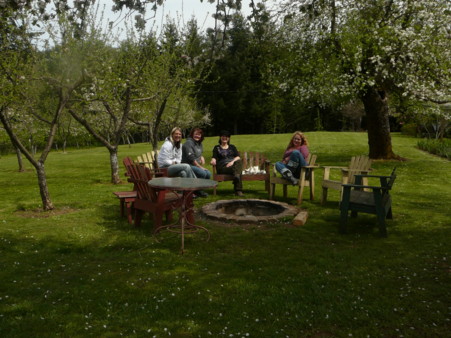 People were having a hard time tearing themselves away. As I wandered around taking pictures, I kept dropping into little groups having all sorts of interesting conversations. Tomorrow, I will take you on a walk around this wonderful property and then show you the strange sight that we earmarked for pictures on the way here.