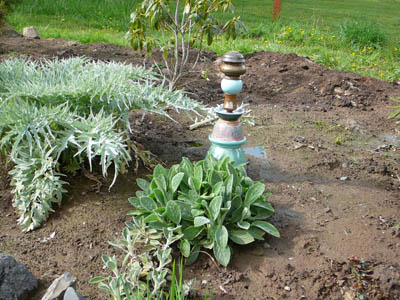 I go to art fairs and shows every now and then, where I find myself admiring garden ornaments like totems and towers by ceramic artists. Alas, my budget, after plants, simply will not stretch to include original works of art. But wait! What about all of those odds and ends…lids to jars that have broken, saucers and/or pots with no mates, the wobbly pot that I threw in college (too weird to use, but too significant to throw away). I gathered a bunch of this detritus and began stacking it up. Perhaps not so oddly, since my taste tends to run to celadons and naturals, there were plenty of pieces that harmonized as if it were planned from the start.

Glue is always a stumbling block in projects of this kind. I had recently graduated from Gorilla glue to an industrial strength craft adhesive called E6000, so I proceeded with all confidence in its ability to hold things together. I gave my finished tower a couple of days to cure in my workroom before moving it outside. After a night in which we had a light freeze, the join where my wobbly, hand-thrown pot met with a smooth, commercial saucer gave way. I thought it was simply a result of the uneven surface, so silicone caulk was pressed into service to fill in and cushion that point of contact. Great! It held! Then all of the other glue joints began to fail. Richard found me some clear silicone caulk (the first one was white) and I went to work cleaning surfaces and reassembling the whole thing using the new method. At this writing, the tower/totem is standing up to the job. You see it here, placed among cardoons and Stachys ‘Helon von Styne’ , which echo the tones in the ceramics perfectly (as does the dirt…oh,well…).

The cardoons were raised from seed from HPSO, and fill me with a mother’s pride. When I went out there to place my tower, you can imagine my consternation when I found that one of my lovely cardoons had been sucked down into the ground by whatever creature has been excavating tunnels around our grounds. Only a few wilty leaves and a deep hole about 4 inches in diameter testified to the crime. We have moles aplenty, which I do not mind, but this is another kettle of critter. Are there gophers in these parts? Any thoughts, fellow sufferers, will be greatly appreciated.