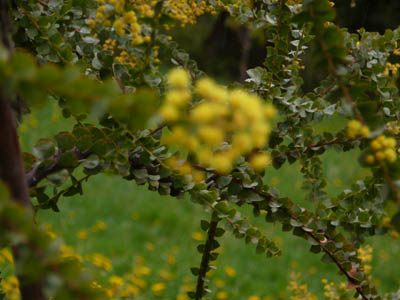 When I bought this plant, Acacia pravissima, in 2004, I had only seen it as a fairly small specimen. I appreciated its architectural qualities, not anticipating the rapid growth, much less flowers. This photo is a little out of focus, but I like that about it. It captures the fuzziness of the flowers, in sharp contrast to the crisp spikiness of the foliage. 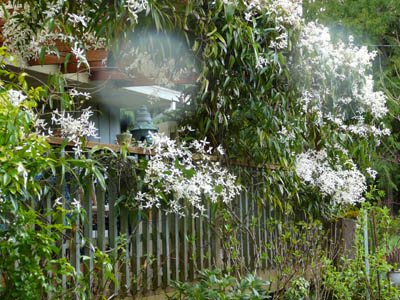 Here is the Clematis armandii as it looks today. It began blooming early in March under the plastic roof of the deck. While those flowers are nearly spent, these on the outside of the deck are just coming on. We get a prolonged blooming season this way. The scent becomes more pronounced as the blossoms begin to fade. It is hard to resist spending the bulk of my time idling on the deck wreathed in delicious aroma. 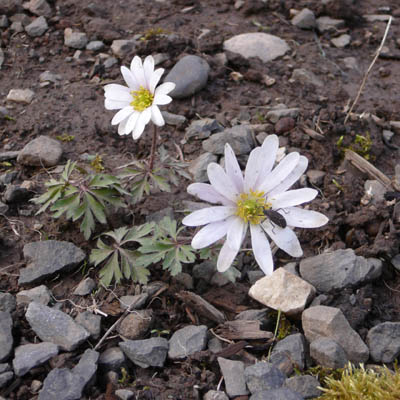 Anemone blanda seems happy here, where others (Mt Hood daffodils, for instance) have failed. I bought only a few, just to see how they would do, because an earlier experiment was less than stellar. Now I will have to order more if I am to enjoy them in drifts. Actually, I rather like them scattered sparsely like this, so that the form stands out against the dark background. Maybe I will just wait and let them colonize on their own, if they are so inclined. 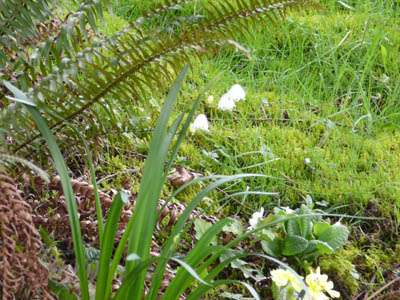 I bought a little bag of these bulbs from a highly regarded nearby nursery. They were labeled Camassia. What I got was Leucojum instead, but they look very sweet in the woodland.

These little grape hyacinths crept furtively into the garden, I know not how. Seems like a good idea. There will be more.

I promised last time to keep a running account of the progress of E. wulfenii. This is about as exuberant as it gets. To give you an idea of scale, it is roughly waist hight on a six foot person.

The cherry trees are just coming on. They won’t last long, if we have our usual hard rains…just long enough for the bees to find them and do their thing. There are two of these ancients out front, placed exactly the right distance apart to support a hammock. I truly hope there will be at least one day fine enough to lay in the hammock gazing up through the blossoms and listening to the buzzing of the bees. 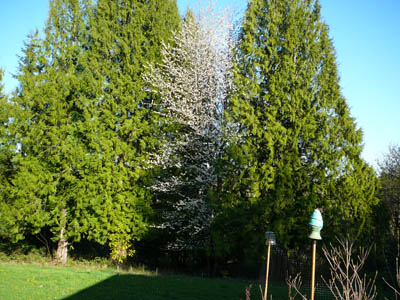 Meanwhile, out in the woods, a volunteer cherry puts on a show, using the darkness of the surrounding cedars as a backdrop. 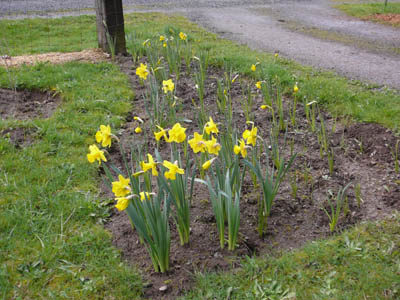 I thought it would be cheery to be greeted by daffodils just as you turn in to our lane. I planted three different kinds so the bloom time would be staggered. My mistake. Luckily, the bulb catalogs are just hitting my desk while last year’s goof-up is plain to see. This time, I will shoot my wad on just one variety, in an attempt to make a bold statement. 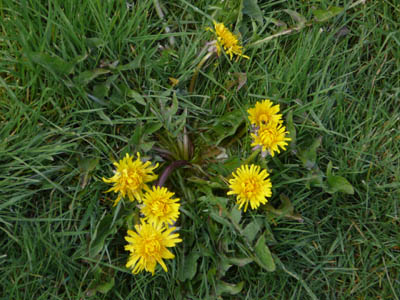 Now these little dears thrive no matter what…and talk about drifts! I ask you: why are we so determined to struggle against nature’s success stories, when we could just relax and learn to make dandelion wine?

5 thoughts on “april in bloom”